The world’s leading trade fair for the process industry took place from August 22 to 26 at Messe Frankfurt, Germany. After a long break due to the coronavirus pandemic, it is a good sign that trade fairs can take place again. In 2021, ACHEMA had to be postponed due to the pandemic, and with ACHEMA Pulse, there was a scaled-down online version later that year. Normally, ACHEMA takes place every three years.

Now, finally, more than 2,200 exhibitors from more than 50 countries showed products, equipment, and processes for the chemical, pharmaceutical, and food industries. That is about two-thirds of the usual number of exhibitors. Around half of the exhibitors came from abroad. Despite existing travel restrictions and long waiting times for visas, 74 exhibitors from China and 143 from India were represented at the 33rd ACHEMA. Visitor numbers were lower than in pre-pandemic times.

Nevertheless, many felt it is important to be back, to be able to meet and exchange ideas. The theme of ACHEMA this time was “Inspiring Sustainable Connections”. The process industry, as the innovation engine of the world economy, is indispensable and essential for getting to grips with global problems such as climate change and environmental pollution. This became clear again and again in presentations, events, and at booths. Key topics of the exhibition and the accompanying congress with almost 600 lectures were sustainability, digital laboratory, product and process safety as well as modular and connected production.

Inflation, disrupted supply chains, a shortage of skilled workers, and the war in Ukraine are weighing heavily on the economy in Europe. This was also felt on many occasions during the event. Particularly the German speakers at the opening event and the opening press conference repeatedly emphasized the importance of sustainability, international cooperation, realistic and pragmatic politics, and competitiveness against the backdrop of recent political developments. 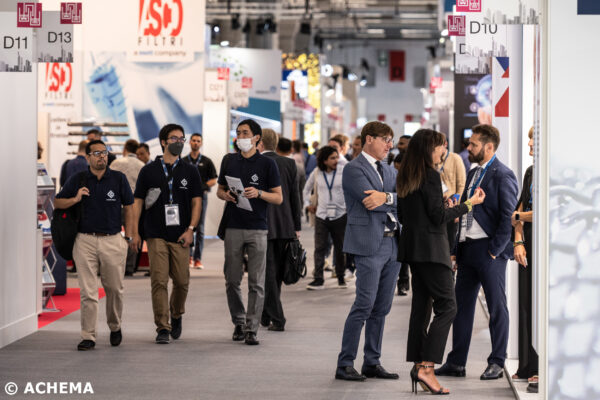 “I started the new year with relatively optimistic ideas,” Dr. Wolfgang Große Entrup (pictured below on the left), Director General of the German chemical industry association (VCI, Verband der Chemischen Industrie), said at the opening press conference with a look back to the beginning of 2022. He thought “that we will overcome the coronavirus pandemic and master other challenges as we have done in the past.” Today, we are looking at the filling levels of the gas storage facilities, and the mood is depressed. There is uncertainty and fear of recession in large parts of the German industry. Putin has broken bridges with his bombs and his finger on the gas tap, also concerning climate neutrality. Discarded coal-fired power plants, for example, come back on stream. We live in a world where an autocrat is blackmailing the world, but we also live in a world where gaps are being bridged and previously irreconcilable differences can be resolved.

Wolfgang Große Entrup emphasized that the companies in his association will stick to their sustainability goals to become CO2 neutral by 2050 despite a sharp rise in production costs and falling sales volumes. Protecting the climate, conserving resources, and preserving a circular economy are by no means easy tasks, he said, but the companies are tackling them. To do so, however, he said, politicians such as those in the EU Commission must impose realistic requirements on companies, not extra hurdles. It is important that the European industry can reconcile transformation with international competitiveness.

The VCI Director General explains that the chemical industry is the heart of the German economy. It secures many millions of jobs and the prosperity of the country. Companies are finding it increasingly difficult to pass on the sharp rise in production costs to their customers and in this downward spiral, production is falling—as is sales volume and, in the end, of course, the profit of each individual company. Every tenth company (mainly small and medium-sized enterprises (SMEs)) is already in the red according to the latest VCI member survey, and Große Entrup warns that those who have to save money are unfortunately also holding back on investments and innovations.

Nevertheless, the industry is sticking to its goals of climate protection, resource conservation, and recycling management. For this to succeed, the industry needs enormous amounts of green energy, and companies must not be left alone with rising energy costs. Currently, approvals take too long, new regulations are without any prioritization, and the renewal of the chemicals regulation REACH will reduce the diversity of substances, but a diverse range of substances is necessary for the transformation. Politics must act here.

“It benefits neither the individual nor the climate if our businesses flee the EU as a result of monstrous requirements and relocate their production to countries with run-of-the-mill standards,” said Große Entrup. The crisis is not the time of the worriers, it is the time of the doers. Germany now needs a sprint in the planning and approval of new plants and the expansion of renewable energies.

Jürgen Nowicki (pictured above in the center), CEO of Linde Engineering and Chairman of the ACHEMA Committee, stressed at the press conference that the process industry holds many key elements in its hands to solve the massive challenges facing the industry, but also humanity as a whole. To meet them, innovation from the industry as well as cooperation and international collaboration are essential, and ACHEMA, as he said, is a good place to promote this.

Walk the Talk—If We Don’t Want to Destroy Everything

Martin Brudermüller (pictured below on the left), CEO of BASF and President of the European Chemical Industry Council (CEFIC), also found very clear words at the opening event. He also stressed that the uncertainty of raw material and energy supplies in Europe caused by the war in Ukraine is hitting the chemical industry at an inopportune time. The goals of the EU Green Deal—which the chemical industry was one of the first sectors to publicly support—pose a formidable challenge, and the chemical industry is in its largest transition, he said.

In this context, he criticized the bureaucratic hurdles—with all dreams of Brussels, thermodynamics cannot be changed—and that nobody in Brussels talks about competitiveness. “This is an alarming point. We should not forget that there is a world outside Germany and Europe—especially when putting obstacles in the way of the industry’s transformation, with cost burdens that are high by international standards and long approval times.”

He warned that time is running out if you think and act on an industrial scale, and he sees the strength of the European chemical companies in great danger in view of the current geopolitical and economic uncertainties. He called for “economic certainty for investments on the way to 2050,” the year by which the EU aims to become climate neutral. There are always winners and losers. Europe urgently needs to ask itself how to shape the way forward and what the key issues are so that Europe does not become one of the losers.

There will be no low-carbon future without chemistry, no electro-mobility, no energy-efficient living, no wind turbines or solar panels nor new semiconductors. At the same time, as mentioned many times, the chemical industry itself is in the middle of the biggest and most challenging transformation in history. Chemical conversion processes require enormous amounts of energy, which is why the chemical industry has high energy consumption and CO2 emissions.

A few years ago the industry announced its ambition to become climate neutral latest by 2050 and the industry has already made important contributions toward sustainability and reduction of its own emissions for many years. It has more than halved greenhouse gas emissions comparing 2020 with 1990 while increasing production by around 50 %. The downside to this is that its processes cannot contribute further to becoming climate neutral. The industry optimized most processes almost to the limits. What is needed now is a fundamental change in the production processes for the procurement of energy and raw materials. 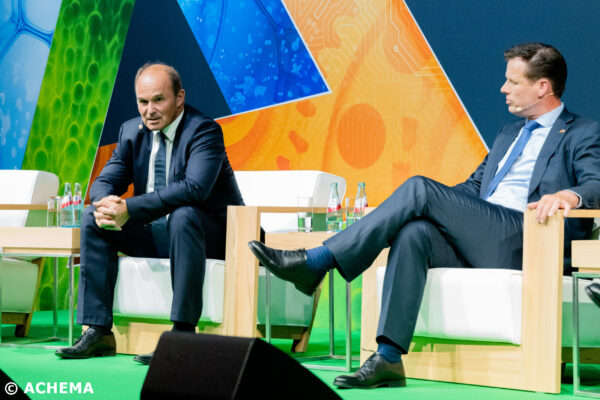 One solution is the electrification of the chemical industry, and this will require enormous amounts of green power to achieve the climate goals. Martin Brudermüller explained that, according to recent estimates, the electricity demand of the chemical industry will be well above 200 terawatt-hours in 2030 and would reach up to 700 terawatt-hours in 2050. That is almost identical to today’s total electricity generated in Germany every year. Chemical companies will have to secure those resources at competitive prices and in time to deliver their contribution to greenhouse gas reduction volumes.

The chemical industry cannot do this alone. Politics with a swift, hands-on, consequent, and courageous approach is needed. However, according to Brüdermüller, many politicians have not really recognized this challenge so far. Nevertheless, the number one priority of policymakers needs to be the expansion of green electricity capacity and infrastructure at maximum speed.

Long-term, structurally high energy prices and possible scenarios of gas shortage will stress the industry in achieving the necessary financial performance to fuel the immense innovation and investment efforts.

The upside is, Martin Brudermüller assures the participants, that the chemical industry has the entrepreneurial passion and the commitment to achieve the transformation towards net zero, and that they have the technological strengths. “Innovation is the lifeblood of the chemical industry,” he said. Also, policymakers and society have realized the need to massively speed up the expansion of renewable energies, both to cope with the independence from Russian gas and to reduce greenhouse gas emissions. So the necessary elements are all there—we need to bring them together pragmatically and realistically and put theory into practice.

Critically, he sees a certain arrogance in Europe: We think we know best how climate policy works. At the same time, he sometimes wished he also had the support for sustainability in Europe that he experiences in China while building up a $10 billion Verbund site project in Zhanjiang in the southern Chinese province of Guangdong. A Verbund site is a system of integrated chemical production. 75 % of the absolute growth volume of the chemical industry until 2030 will come from China. Europe will be 15 % of global chemical production. “We will only solve the climate problem together with China, respectfully and critically.” The industry is currently moving to Asia. Many investments are made in Asia while we are still discussing. Just now ammonia production is no longer competitive in Germany due to the high gas prices. This means we will have to import it. Once production moved away, it will not come back again. If we do not want to destroy everything, we have to act now; walk the talk.

The next ACHEMA will take place in the usual cycle from June 10 to 14, 2024. The organizers assume that the trade fair will then also return to its full size. Climate change will, for sure, play a prominent role there as well.

Clever Picture: Why Is Natural Gas so Important for the Chemical Industry?
ChemistryViews, August 2, 2022
Hardly any other industry needs as much gas as the chemical industry; this Clever Picture explains why

Event Highlight: ACHEMA 2018
ChemistryViews, June 21, 2018
Trends and spotlights from the leading show for the process industries