Why is it so hard to do something about the climate crisis? Why don’t we really act on what we know? Why don’t we stick to good intentions?

An exhibition on the climate crisis has opened in Frankfurt’s Museum of Communication (Museum für Kommunikation) that I think is well worth seeing. Climate_X (Klima_X) highlights levels of communication and reactions, invites visitors to reflect in an interactive and playful way, and aims to show that change is possible.

At the beginning, visitors are asked to imagine that the Earth is a spaceship and that we humans are the crew. To ensure that Spaceship Earth navigates safely, everyone’s activity is necessary and so everyone is asked to decide whether they want to be a navigator on board who leads the way with ideas, a floater who provides support where help is needed, or a seeker who doesn’t yet know exactly what they would like to do.

After an initial block of facts about the climate crisis, you can use funny animals and interactive exhibits to explore what type of person you are in the climate crisis. Perhaps a slow tortoise, a startled bird, a petulant goat, an active bee, a battle-ready monkey, sad in shock like a meerkat, or helpless with head in the sand like an ostrich.

During our visit, the most common emotions of previous visitors were helplessness (43 %), fear (39 %), and anger (34 %). Confidence was still at 29 %. Visitors’ comments on why they are confident were, “because there are more and more of us who are committed to change,” “because humans want to survive,” and “because only hope makes things possible.” 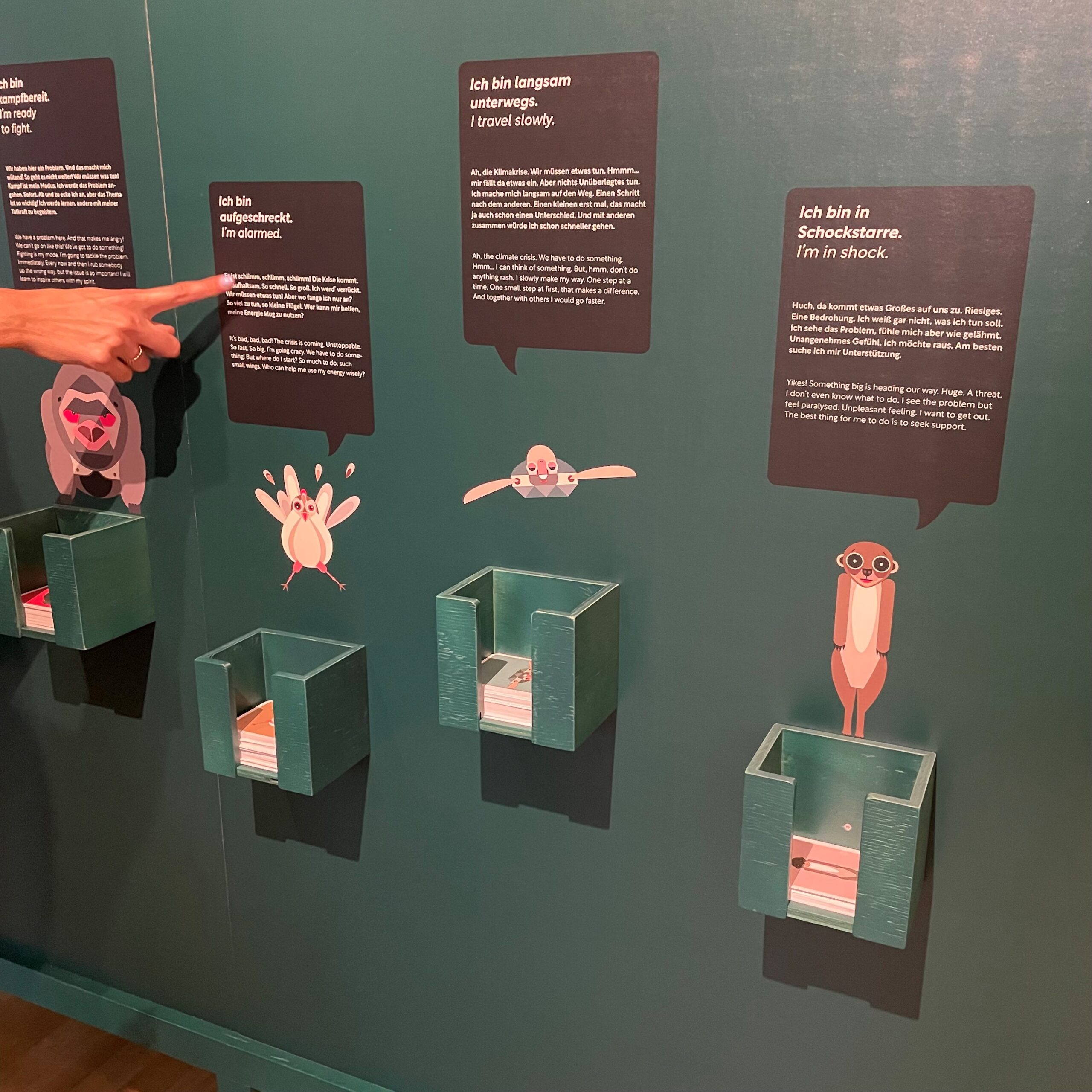 In addition to scientific facts such as the CO2 concentration in the atmosphere or temperature and precipitation changes, there are exhibits on historical developments on climate awareness, changing communication strategies of the press and companies on disasters and environmental issues, typical excuses for inaction, hatred, and devaluation, or different global climate movements. All in all a good mix of text, images, and interaction.

At the end of the exhibition, visitors are invited to sit down at a table with so-called climate pioneers and get inspired by their stories. With a view of the Frankfurt skyline, visitors sit in pairs opposite life-size videos of, for example, the physician, science journalist, and cabaret artist Dr. Eckart von Hirschhausen or the biologist, Greenpeace environmental activist, and founder of ORCA (Organization for Rapid Climate Action) Dr. Thomas Henningsen and learn what they are committed to, what brought them to this point, and what future they believe in. In addition, at the end of each video, you get a challenge from the climate pioneer, so a suggestion of what they think the visitor should do now. 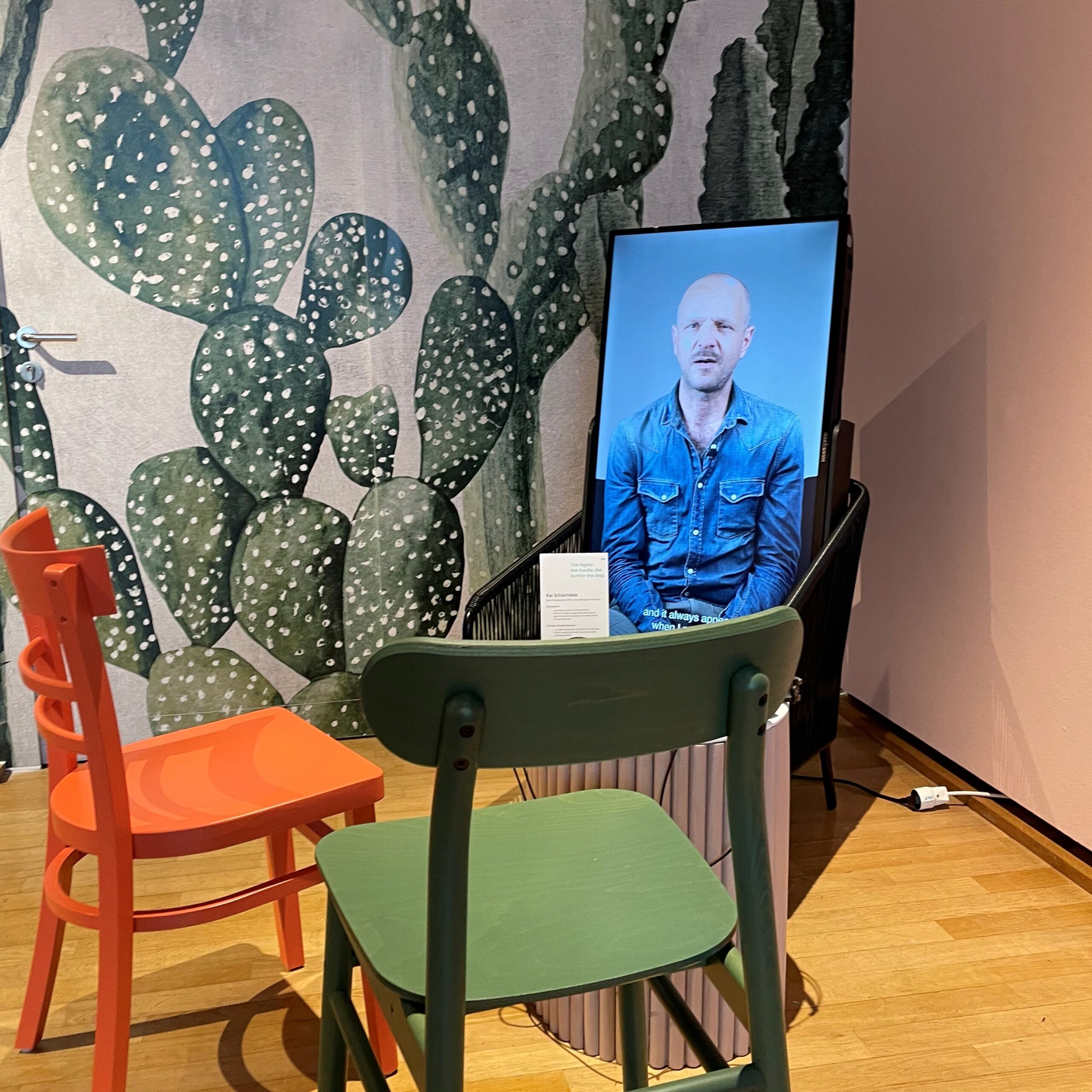 In his video, Eckart von Hirschhausen says that the British behavioral scientist and expert on chimpanzees Jane Goodall made him rethink his position when, during an interview he was actually conducting with her, she asked him the question: “How can it be that we humans, the most intelligent creatures on this planet, are about to destroy our own home?”

Hirschhausen said he learned from Alexander Gerst, the German astronaut, that the greatest thing to discover in space is looking back at our Earth. It would make you realize how wonderful and fragile the Earth is. Viewed from space, the atmosphere is not infinite, but paper-thin, as thin as the skin of an apple and also at least as fragile.

The atmosphere is our protection and it is the difference between life and death on Earth. From Earth, we often think the sky is infinite and everything we blow into it will somehow be diluted. But that’s not true. And at some point, tipping points are passed, which then can no longer be reversed. That’s why the next few years will be crucial for what happens to humanity. As always, Hirschhausen finds a great turn to optimism: “In our huge universe, there is only this one planet with coffee, sex, and chocolate. It’s not getting any better anywhere else.”

His challenge to viewers at the end of the video is to get up, not just from the table but figuratively. He thinks we’ll all be asked: What was important to you? What was in your power to change? What did you do? What did you not do? Why? Did you think about the next generation? The most important thing an individual can do, he continues, is not to stay alone, but to network.

Feasible Approaches For Me

The exhibition made me realize once again how much we humans are creatures of habit and herd. For many of us, the facts and reports on the climate crisis lead to helplessness, anger, and fear. I take with me that most of us need, besides knowledge, other people who shake us up and exemplify alternatives, who may upset us, but who make us exchange, deal with, discuss, and network. Only in this way, awareness can grow, and new rules may arrive in our everyday lives and become normal, such as the idea that whoever pollutes should pay.

Who can I move who can, in turn, move more than me? With whom can I discuss questions like “Do you think about your carbon footprint, and what does that mean to you?” These are two feasible approaches for me to take away.