Award ceremony at IUPAC|CHAINS2023 in The Hague, The Netherlands

Chemistry Europe, an association of 16 chemical societies from 15 European countries publishing a family of high-quality scholarly journals and the magazine ChemistryViews, recognizes outstanding contributions to chemistry with its new Chemistry Europe Award. The 2023 Chemistry Europe Award will go to Bert Weckhuysen, Professor at Utrecht University, The Netherlands, who is being honored “for outstanding achievements and leadership in the field of sustainable chemistry and catalysis research”. The award ceremony will be held in August, during the 49th IUPAC World Chemistry Congress (IUPAC|CHAINS2023) in The Hague, The Netherlands. Bert Weckhuysen will receive the award and give a lecture.

Bert Weckhuysen is a true pioneer and world-leading expert in the study of heterogeneous catalysts. The innovative character, the scientific depth, but also the broad impact of his work are remarkable. His research ranges from the development and use of operando spectroscopy and microscopy methods via the elucidation of reaction and deactivation mechanisms in heterogeneous catalysis to the high-level application of the acquired fundamental principles onto societally highly relevant applied areas. Hardly anyone has influenced so many industrially highly relevant processes on such a high scientific level: Methanol-to-Hydrocarbons (MTH), Fluid Catalytic Cracking (FCC), Fischer-Tropsch Synthesis (FTS), and the Sabatier process, to name just a few. At the same time, the Chemistry Europe Award winner’s work is pioneering emerging areas, such as catalytic biomass conversion with an emphasis on lignin, humin, and chitin, and more recently the electrocatalytic conversion of CO2 and the recycling of plastic waste.

Bert Weckhuysen studied chemistry at Leuven University, Belgium, where he received his Ph.D. under the supervision of Robert Schoonheydt in 1995. He was a Postdoctoral Fellow with Israel Wachs at Lehigh University, Bethlehem, PA, USA, with Jack Lunsford at Texas A&M University College Station, USA, and at the Belgian National Science Foundation, thereby affiliated with Leuven University. He joined Utrecht University in 2000 as Professor at the Inorganic Chemistry and Catalysis Group, became Distinguished Professor at the Faculty of Science in 2012, and since 2018, he is Distinguished University Professor at Utrecht University.

Weckhuysen has received numerous awards, such as the 2018 Robert B. Anderson Award, the 2017 Kozo Tanabe Prize for Acid-Base Catalysis, the 2013 Spinoza Award, the 2012 International Catalysis Award, the 2011 Paul H. Emmett Award in Fundamental Catalysis, and the 2009 Netherlands Catalysis and Chemistry Award. An exceptional honor was his 2015 Knighthood in the Order of the Dutch Lion.

Founded in 1995, Chemistry Europe is an association of 16 chemical societies from 15 European countries, representing over 75,000 chemists. It publishes a family of high-quality scholarly chemistry journals, covering a very broad range of disciplines, and the science news magazine ChemistryViews. Wiley-VCH is their publisher.

Chemistry Europe supports its members at every stage of their careers as they strive to solve the challenges that impact humankind. In all its work, Chemistry Europe values integrity, openness, diversity, cooperation, and freedom of thought. https://chemistry-europe.onlinelibrary.wiley.com/

To download a high resolution copy of the image, please visit: https://www.chemistryviews.org/wp-content/uploads/2023/01/Bert-Weckhuysen-E.jpg 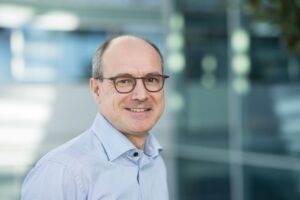 To download a high resolution copy of the image, please visit: https://www.chemistryviews.org/wp-content/uploads/2023/01/CE_logo_with-Strapline_blk_R0G0B0.jpg

To download a high resolution copy of the image, please visit: https://www.chemistryviews.org/wp-content/uploads/2023/01/CE_AWARD_Icon_Negative_RGB_650px.png