Research groups from the area have been visiting the Wiley-VCH offices in Weinheim to find out what really happens to their manuscript when they hit the “Submit” button.

Researchers frequently interact with publishing houses as part of their everyday activities, but it is known from community feedback, press coverage, society partners, and industry bodies that the level of understanding of the activities undertaken by publishers is generally quite low. A lack of understanding of editorial processes at journals can be a particular source of confusion and frustration for our key users, and has the potential to adversely affect the researcher/publisher relationship. Therefore, a program of visits by local research groups to the Wiley-VCH offices, the Open-House Community Program, has been created.

The aim of the program is to spread awareness of what we as a publisher do, to show that there are highly qualified and experienced people working (mostly unseen) at all stages of the publishing process, and to demonstrate that there is significantly more to scientific publishing than just the online pdfs that many of our users see every day.

The pilot visit of the program took place in May 2015 when a group of ten, led by Professor Marcel Deponte from Heidelberg University, were the first group to take part. The day consisted of four sessions led by colleagues Greta Heydenrych (Editor-in-Chief, ChemPhysChem), Jolke Perelaer (Commissioning Editor, Books), Vera Koester (Editor-in-Chief, ChemistryViews.org), and Richard Threlfall (Editor-in-Chief, Asian Journal of Organic Chemistry), which aimed to give insights into manuscript handling in a journal editorial office, book publication, science journalism, and peer-review/science writing, respectively. Greta says of the program: “Publishing looks very different from the outside and it’s frustrating for us and for our authors when they really don’t have a clue what goes on in the editorial office. Helping them to understand the work we do, how we reach decisions on papers, the work that goes into publishing books, and how to reach out to audiences beyond other scientists is highly beneficial for both parties”. 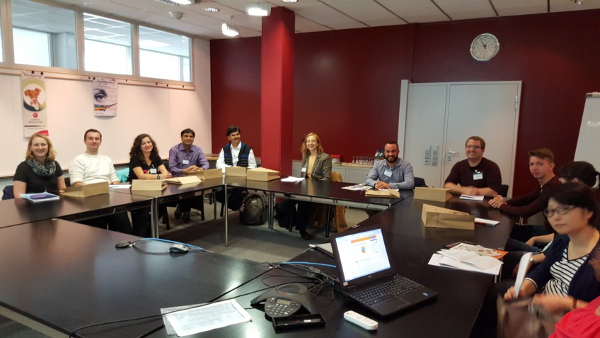 The group size was kept purposely small to enable close interaction between all participants in a comfortable atmosphere. This meant that the visitors were confident in expressing their opinions and, judging by the many questions asked, were quite surprised by the many aspects of publishing that were clearly new to them. The topics that caused the most discussion were the future of book publishing and social media as a new discovery/dissemination tool for scientists, which are, of course, also hotly debated among colleagues in-house too! Over a fine pizza and salad lunch, the four colleagues further chatted about a broad range of themes with the attendees, from the history of Wiley as a company to specifics such as how we can help our authors by advertising certain services more. 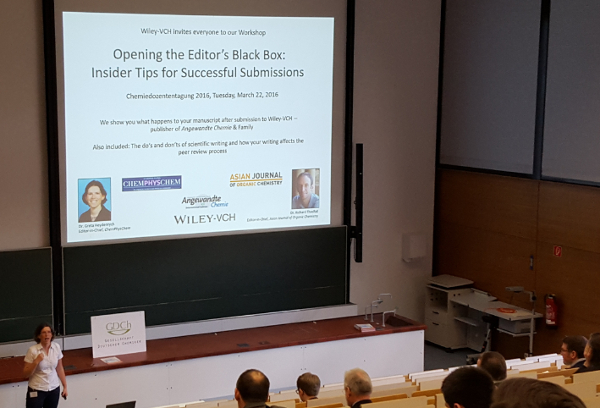 Workshop at the Chemiedozententagung in Heidelberg, Germany, in March 2016.

After a successful pilot, one further visit has already taken place in September 2015, when the group of Professor Svetlana Tsogoeva from Friedrich-Alexander University Erlangen-Nuremberg were the guests, and more are scheduled over the coming months. Greta and Richard also presented a condensed version of the workshop at the Chemiedozententagung of the Gesellschaft Deutscher Chemiker (GDCh, German Chemical Society), which was held at Heidelberg University in March 2016. The four colleagues involved hope that they can continue to build relationships and understanding between the publishers and our authors, and that the authors can go on to use this knowledge to help themselves achieve publishing success, ideally with Wiley-VCH!