Joined at the hip: EurJOC and EurJIC celebrate 20 years of publishing

In 2018 the European Journals of Organic and Inorganic Chemistry (EurJOC and EurJIC) celebrate their 20th Anniversary with two new editors at the helm. Doctors Anne Nijs and Preeti Vashi, talk to Kim Meyer from ChemViews Magazine about collaboration, innovation, and what it means to be an editor in 2018.
You might say that EurJOC and EurJIC are joined at the hip. The journals have their origins in 13 European chemical journals, representing more than 1000 years of publishing in the chemical sciences when summed. At the heart of this remarkable collaboration are more than ten European chemical societies that have stimulated research within their communities since the turn of the 19th century, and earlier. 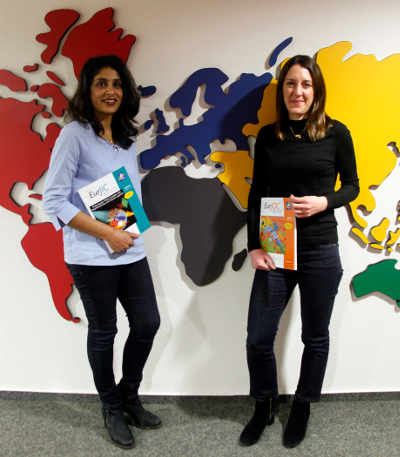 That’s quite a history to take on as an editor. And yet, Dr. Anne Nijs, Managing Editor at EurJOC, and Dr. Preeti Vashi, Editor-in-Chief at EurJIC, are undaunted and brimming over with projects and plans for the future. The two editors now oversee the day-to-day operation of their journals and liaise closely with their Board Members as they steer the development of EurJOC and EurJIC. Their passion and belief in the journals has the benefit of assured stewardship. Former Editors-in-Chief, Doctors Haymo Ross and Karen Hindson, have passed on a fiery brand. Not least in all of this is the long-standing collaboration between the two journals and a shared team of tight-knit professional editors. Of their partnership Vashi says: “Other ChemPubSoc Europe journals might be our sister journals but we certainly are twins.”

The two journals have prospered over their 20-year-long histories with the support of talented authors and reviewers, and the guidance of working scientists. Notable among these individuals are the long-serving President of EurJOC and EurJIC, Prof. Luis Oro, who was instrumental in establishing the publishing organization known today as ChemPubSoc Europe; as well as numerous enthusiastic Editorial Board Members. Nijs and Vashi joke that they are working on getting their new Chairmen, Prof. Burkhard König (Universität Regensburg, EurJOC) and Prof. Lutz Gade (Universität Heidelberg, EurJIC), on a direct line. Nijs adds: “But we do like to keep our personal board meetings. I think it’s important to have the personal contact in addition to modern media.”

This February EurJOC and EurJIC hosted their annual combined Editorial Board meeting on the journals’ home turf; in the scenic provincial town of Weinheim, near Heidelberg (Germany). “It’s a chance to get good feedback from them, in terms of how to further the journals,” says Vashi. Nijs adds that board members from organic and inorganic backgrounds bring different perspectives to these meetings, which are valuable to both journals. They laugh knowingly when I ask about the classical rivalry between organic and inorganic chemists. Do the two communities enjoy collaborating?

The answer might be that chemists make it their business to tackle challenges. Discussion and debate between the communities continues to be vigorous and rewarding. Point-in-case: a round-table discussion on the topic of the “Future Faces of Organometallic Chemistry and Homogeneous Catalysis”, which was co-sponsored by EurJOC and EurJIC at EuCOMC2017 in Amsterdam in July 2017, revealed a common interest in topics ranging from sustainability and application-based research to self-governance and open exchange of information.

EurJOC and EurJIC relish such opportunities to collaborate, while supporting the activities of their owner societies and its members. Immediately on the horizon, the journals will host the reception for the GDCh Chemiedozententagung this March, in Jena, Germany. And much anticipated are the EurJOC and EurJIC lectures delivered later this year by Nobel Laureates Prof. Ben Feringa and Prof. Jean-Pierre Sauvage at ICOS2018 (Florence, Italy) and ICCC2018 (Sendai, Japan), respectively.

Special issues, in which published articles are curated by theme, are an ideal outlet for the collaborative instincts of EurJOC and EurJIC. “Our content doesn’t usually lend itself to joint issues,” says Vashi apologetically, before rattling off a list of special and virtual issues that the journals are working on together and independently. Key among these are a virtual issue packed with recent articles by Dutch and German authors, in honor of journals apportioned by the Dutch (KNCV) and German (GDCh) Chemical Societies in 1997. The resultant merger journals, Liebigs Annalen/Recueil and Chemische Berichte/Recueil, along with eight other European journals, went on to found EurJOC and EurJIC as we know them today. Likewise, cross-journal virtual issues coupled with the celebrated European research institutes, the Institut Català d’Investigació Química (ICIQ, Tarragona, Spain) and the Leibniz-Institut für Katalyse (LIKAT, Rostock, Germany) are due out in the Summer, and the journals are currently compiling a virtual issue that highlights the work of their prominent Board Members.

It is extraordinary to consider that only 20 years ago the two journals shifted from print to digital and now publish 48 issues per year exclusively online under a continuous publishing model. And indeed, so much more has changed in scientific publishing. An editorial written by EurJIC editor Dr. Hindson, “Reminiscences of a Retiring Editor-in-Chief”, gives a remarkable account of this transition over the last three decades. Modern digital publishing brings with it a host of new challenges; among them, innovating and communicating apace with a tech savvy audience, and being recognized on a global stage jostling with competitors. Not least of these challenges is a misconception about the historical origins of EurJOC and EurJIC. “People still don’t realize that we are society journals,” says Vashi, “because we are published by Wiley-VCH, they perceive us to be commercial publishers. We are 100% society-owned journals.”

Nijs and Vashi are enthusiastic about strengthening ties with their European owner societies during their tenure. With a busy schedule of conferences ahead, and many more events scheduled for this auspicious 20th Anniversary, the two editors look forward to meeting you very soon.

Dr. Anne Nijs received her doctoral degree in chemistry from RWTH Aachen University, Germany, in 2012. She joined Wiley-VCH as an Assistant Editor at Chemistry-A European Journal, and from 2013 she was promoted to an Associate Editor. Just before she joined the EurJOC team as a Deputy Editor in 2016, she traveled to India for a short sabbatical. Dr. Nijs became the Managing Editor of EurJOC in October 2017.

Dr. Preeti Vashi received her doctoral degree in chemistry in 2004 from the University of the Witwatersrand, Johannesburg, South Africa. In the same year she joined Wiley-VCH as an Assistant Editor to EurJOC and EurJIC, and was promoted to Associate Editor in 2005. Dr. Vashi was a Deputy Editor for EurJIC exclusively from 2006-2017, before her promotion in January 2018 to Editor-In-Chief.