Now celebrating its second birthday, ChemRxiv is on track to become the preprint server of choice for chemists globally. The popularity of the preprint server suggests that preprinting and publishing both have a role to play in chemical research and scholarly dissemination. The Publishing Manager of ChemRxiv, Marshall Brennan, shares his insights with ChemPubSoc Europe.

ChemRxiv’s Publishing Manager, Marshall Brennan, believes that the support of societies “…gives authors and readers a sense of confidence in our purpose and mission that would be otherwise difficult to replicate.” And confidence is clearly running high. At the time of publication of this article, the total number of posts to ChemRxiv exceeded 2400, with roughly 690000 downloads and more than 2.3 million views to date. 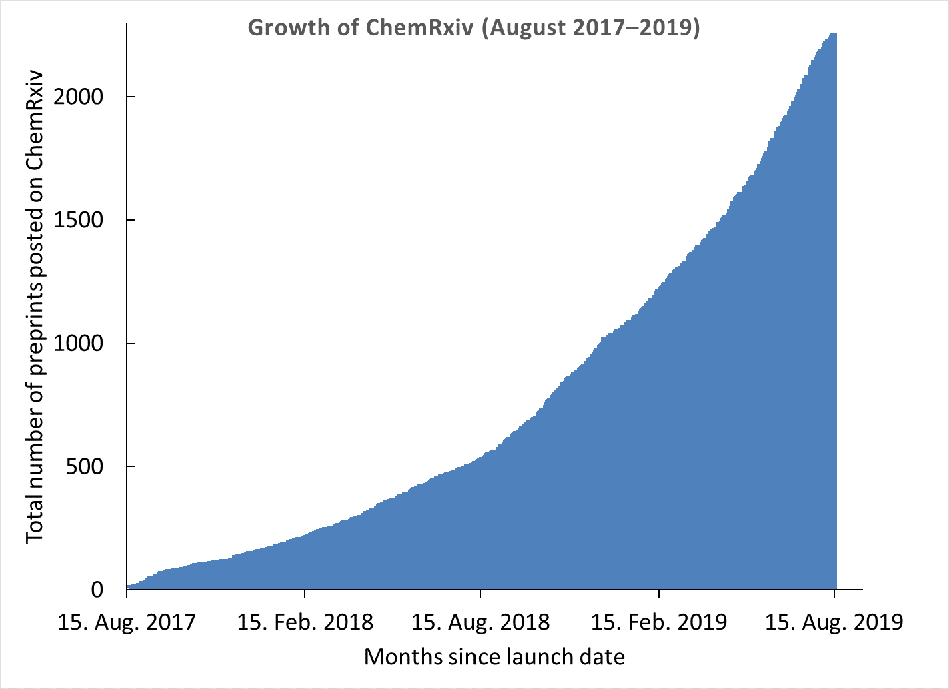 Caption: The total number of preprints posted on ChemRxiv from its launch date in August 2017 to August 2019.

ChemRxiv’s dramatic growth is linked to its subject-focused nature. Brennan explains: “Because readers know that we provide high-quality chemistry content by following standards designed for chemists, readers are more interested in coming to ChemRxiv.” This creates a positive feedback loop he suggests, saying: “authors are more interested in submitting their best work knowing it will be read by their colleagues and peers.”

Who preprints on ChemRxiv and what are they posting?

Caption: Breakdown of ChemRxiv’s preprints as of August 2019.
a) Preprints contributed by corresponding authors from ChemPubSoc Europe countries. b) Preprint topics.

Although a preprint does not necessarily clear the way to publication in a journal, indications are that researchers benefit from the rapid dissemination of their results on ChemRxiv. The chemistry community can engage with the research rapidly, as can talent scouts, such as funding bodies and publishers. To date, roughly 60% of the preprints posted on ChemRxiv have been published in scholarly journals.

ChemPubSoc Europe, together with Angewandte Chemie and Asian Chemical Editorial Society (ACES) sister journals, adapted their editorial policies to consider preprints as of May 2018. Since then, the number of ChemRxiv preprints that have been submitted to the journal family has grown. Of those preprints posted to ChemRxiv and subsequently published in a journal, Wiley journals have published more than 10%, with Angewandte Chemie and Chemistry–A European Journal publishing the bulk of those.

Chemists are less familiar with preprinting compared to physicists and theoreticians, for whom preprinting services have existed for decades. There are signs that the chemistry community is still learning how to integrate preprinting into more familiar dissemination practices. And for that reason, it’s important to make a distinction between preprints and journal publications.

A preprint is defined as a draft, or version, of a paper that is posted on a preprint server and which has not yet been peer-reviewed for publication. Upon posting, a ChemRxiv preprint undergoes screening checks (e.g., for ethical infractions such as plagiarism). After posting, the preprint is freely available and citable. A preprint does establish precedence; however, this is not necessarily an impediment to consideration at a journal. A preprint server is a searchable repository for preprints and, at ChemRxiv, content is curated into 16 categories. ChemRxiv preprints have DOIs and they are indexed in major search engines such as Google and SHARE. Moreover, ChemRxiv is in Crossref, and Scopus is in the works.  However, ChemRxiv does not appear in Web of Science (Wos) because it is the policy of WoS to exclude preprint servers currently. 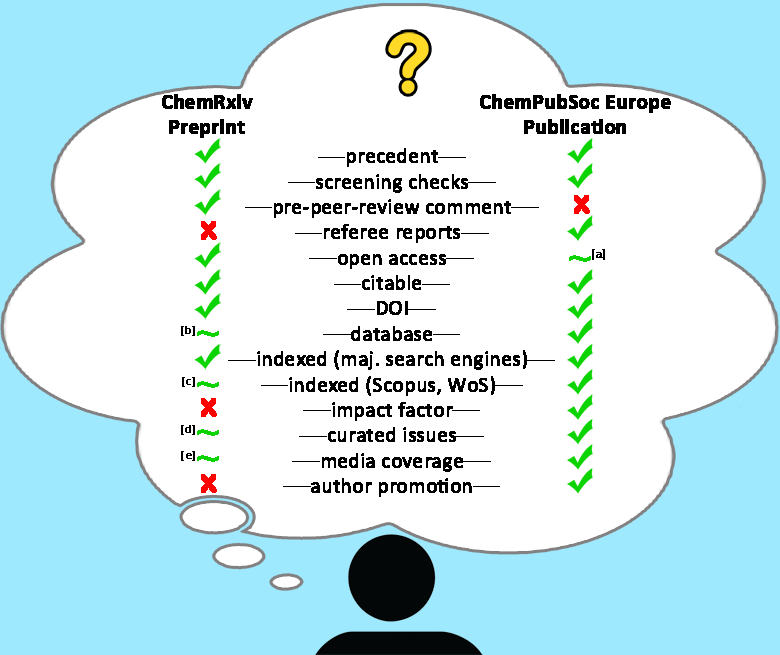 Caption: At the interface of preprinting and journal publication.
[a] ChemPubSoc Europe and ACES journals, as well as Angewandte Chemie, are hybrid journals, which means that open access publishing is possible with a fee. Open access fees can be paid by the author, an institute, or through an international agreement. In special scenarios, articles can become freely accessible for a limited time or for a select audience. [b] Growing rapidly. [c] Pending (Scopus); not available (WoS). [d] Curated into 16 categories. [e] May be picked up by a news outlet.

What is your preprinting–publishing workflow?

Preprints are traditionally touted as a means to obtain early feedback on a paper, providing an opportunity for revision before the work undergoes peer review at a journal. On more established preprint servers, such arXiv, users tend to wait a little while before submitting their preprint to a journal. In comparison, at ChemRxiv simultaneous preprint posting and journal submission are quite common.

Brennan has noticed an evolution in the behavior of ChemRxiv’s authors recently, saying: “what we’re seeing is that the number of people who put their preprints online well in advance of journal submission is increasing, particularly among repeat users of ChemRxiv.” And there are good reasons to allow time between preprinting and publication. For one it creates opportunities for wider community comment and it allows an author to gauge which journal might be the best home for the work.

Whether direct commenting on preprints is appealing to chemists is another question. ChemRxiv did offer a commenting service initially but this was taken down because of spam. Currently, readers are encouraged to contact corresponding authors by email or with a third party tool such as Pubpeer. Twitter is also a platform for lively debate. Brennan remarks: “It is on our roadmap to eventually provide a mechanism for feedback, but early conversations with our users made it clear that they were uncomfortable with comments and so we put the idea on the shelf until we know we can do it in a way that meets the needs and expectations of our authors and readers…”

With the advent of preprinting, there were concerns that the community would lose track of all of the versions of a paper available online. In ChemRxiv, authors can archive different versions of a preprint and receive a unique DOI for each. Similarly, a journal-published article—the version of record—receives a permanent DOI. Connecting a preprint to the associated version of record is an automated process managed by CrossRef and, all going well, a visitor to ChemRxiv can simply follow a link from a preprint to a published article. However, mismatches do occasionally happen where, for example, the title of a preprint and the corresponding journal-published article are not the same. That’s obviously a concern for publishers and researchers alike, as it means that citations to the version of record are not tallied properly and are not considered in a journal’s yearly impact factor calculation. Brennan believes that ChemRxiv’s automated preprint–publication linking system is working as well as it can, and the preprint server also does manual checks. Further improvement is anticipated from CrossRef, says Brennan. In the meantime, ChemRxiv encourages authors, readers, and editors, to get in touch about missing links, which can always be processed manually.

By Kim Meyer and Robert Hughes