Fude Feng, Nanjing University, China, Shu Wang, Beijing National Laboratory for Molecular Sciences, Chinese Academy of Sciences, and University of the Chinese Academy of Sciences, Beijing, and colleagues have developed a bioorthogonal molecular system for the targeted introduction of nitrite ions into cells. Their system releases nitrite ions in cancer cells using a “click-to-release” strategy, and these ions, along with other active ingredients, help to initiate cell death. The system could improve the synergistic effects of various cancer therapy drugs.

Cells rapidly convert nitrite ions into nitrogen monoxide (NO), which is involved in many cell processes. For example, it can enhance the effect of various cancer drugs by forming reactive oxygen species. However, the targeted introduction of nitrite to a specific location is complicated. The team developed a bioorthogonal system that selectively transports nitrite ions along with other active ingredients to the endoplasmic reticulum, where they are then released.

Bioorthogonal systems facilitate useful chemical reactions (click reactions) in cells, without the risk of the reaction partners having adverse effects on the body on their journey to the target site. They have paved the way for an exciting array of novel disease treatment approaches. A testament to this is the fact that the 2022 Nobel Prize in Chemistry was awarded for the development of click chemistry and bioorthogonal chemistry.

To transport reaction partners to a target site without them participating in unwanted reactions, nitrite ions have to be bound to a carrier molecule as a nitro group. However, the conditions needed to release nitrite again when they reach their target are usually much harsher than those found in living cells. For this reason, the researchers designed two bioorthogonal precursors: one to transport the nitro group and other active ingredients, and another to carry out the “click-to-release” reaction by reacting with the first precursor. 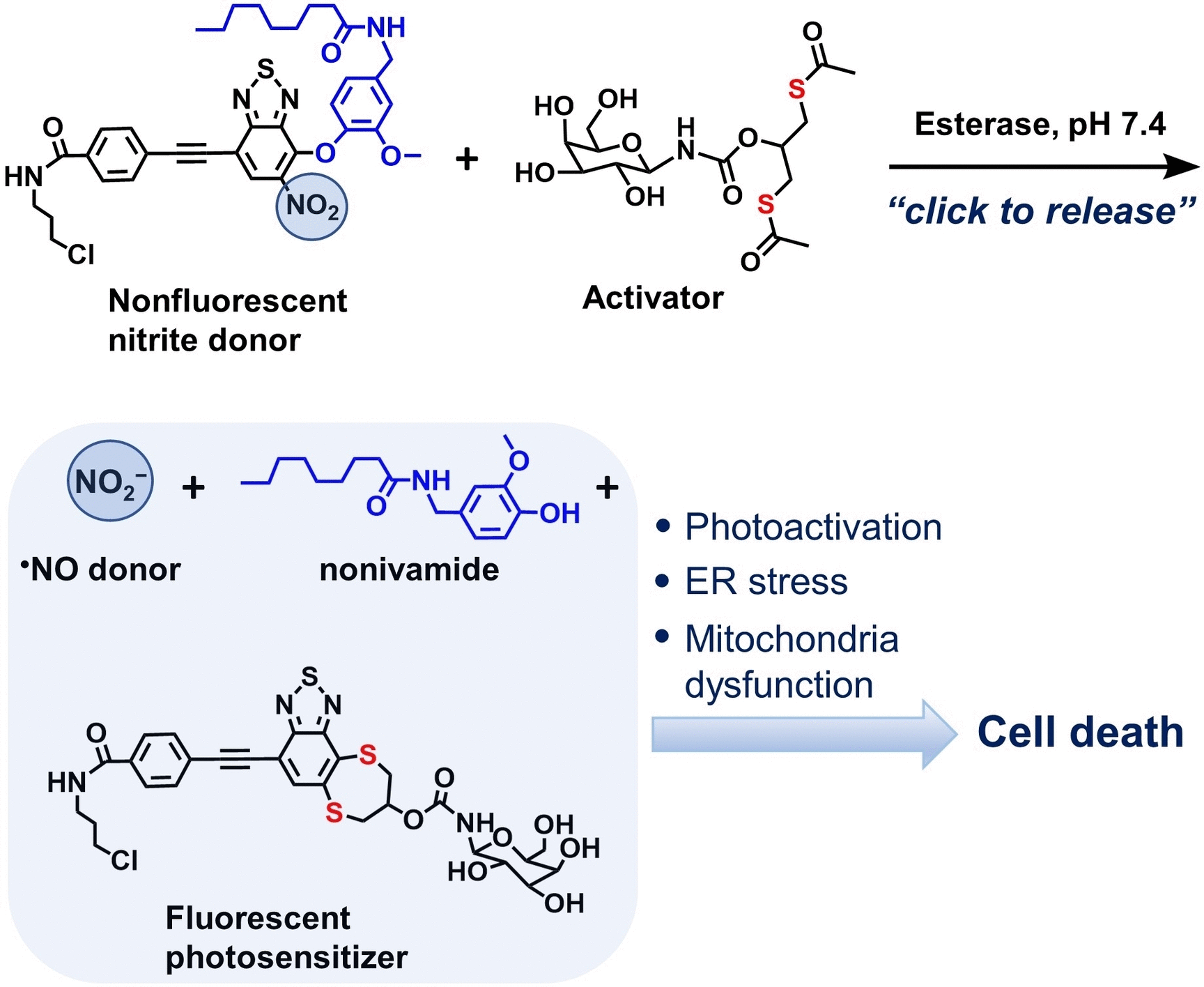 The first of the two precursors, ER-Non, performed a number of roles. Firstly, it is readily taken in by the endoplasmic reticulum. Not only do many important cell processes take place in this cell organelle, but it is also the site of action of a number of drugs. Secondly, alongside the nitro group, ER-Non transported the active substance novidamide, which triggers cellular stress responses at high doses and can thus cause cancer cells to initiate cell death.

The other molecular precursor, a dithiol, is activated by enzymes typical for cancer cells. In a “click-to-release” reaction, the activated molecule releases both the nitrite and the novidamide from ER-Non. The chemicals are not simply released; the reaction causes the new substance to fluoresce and, in so doing, to become a photosensitizer. Under the action of light, it enhances the ability of the nitrite ion and the novidamide to generate reactive oxygen species and trigger cellular stress. This phenomenon of photosensitizing is utilized in photodynamic cancer therapy.

The researchers tested their bioorthogonal system on liver cancer cells and observed arrested growth of these cells. They also observed a notable increase in reactive oxygen species after adding both bioorthogonal components.

Since none of the components alone would exert this effect, the team concluded that synergistic effects occur. This opens up new possibilities for more effective cancer therapies.