Strychnine is a natural product that was isolated in 1818 from the seeds of Strychnos nux-vomica (poison nuts). Approximately 130 years after its isolation, the structure of strychnine was independently elucidated by Robert Robinson in 1946 and Robert Burns Woodward in 1947. Currently, strychnine is used as a pesticide. The polycyclic architecture of strychnine has inspired chemists to develop new synthetic transformations and strategies for accessing this molecular scaffold. However, how plants create this complex structure remained unclear.

Sarah E. O’Connor and colleagues, Max-Planck Institute for Chemical Ecology, Jena, Germany, have identified all the genes involved in the biosynthesis of strychnine (and the related molecules brucine and diaboline) and expressed them in the model plant Nicotiana benthamiana (Tobacco plant). Thereby the team was able to show that this complex, pharmacologically active class of compounds can be harnessed through metabolic engineering approaches. They used a combination of chemical logic, -omics datasets, and enzymatic characterization for their work and discovered nine enzymes that convert geissoschizine to diabolin, strychnine, and brucine. 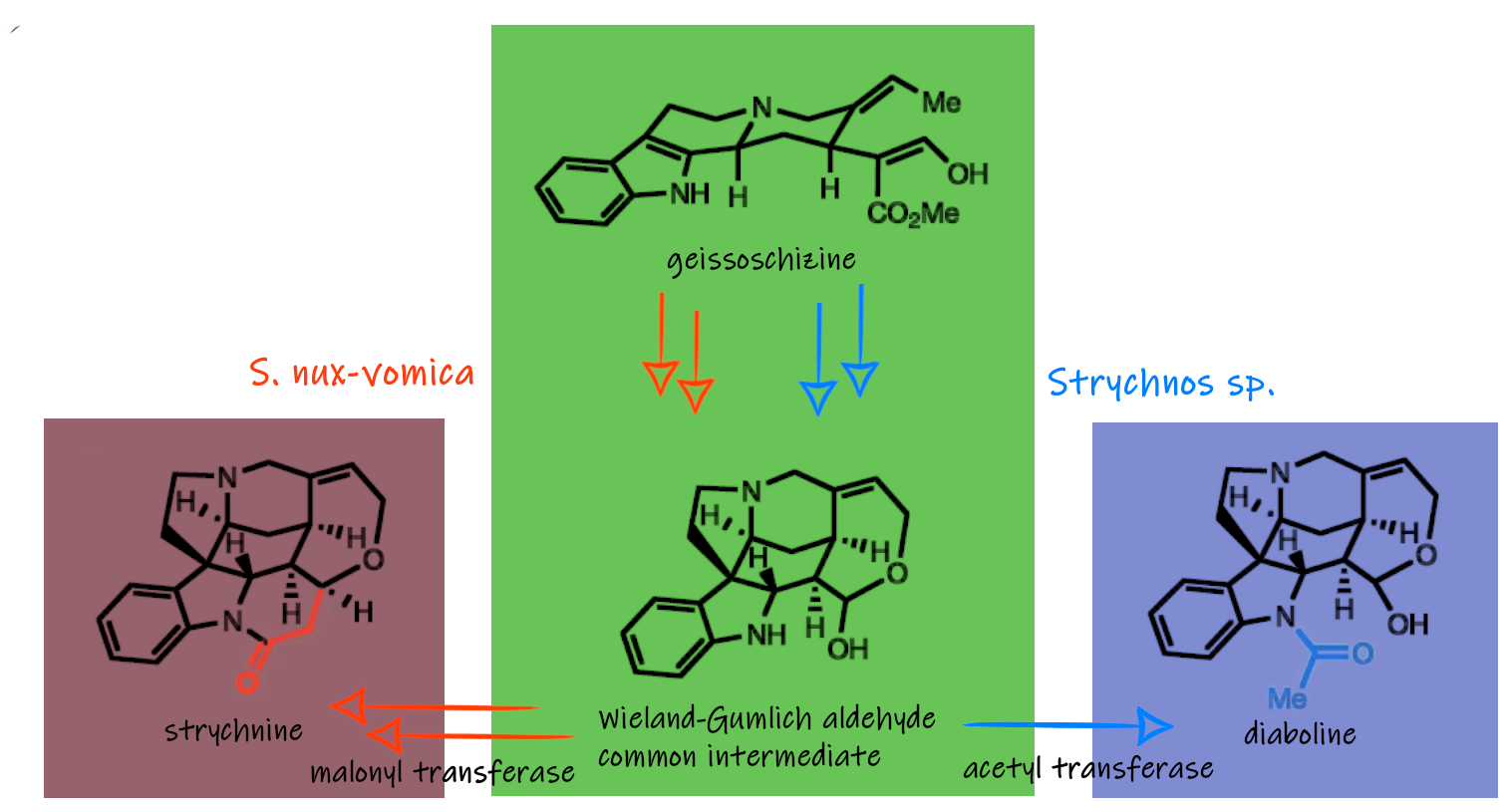 For example, the researchers studied a plant of the Strychnos family (Strychnos sp.) that produces diaboline instead of strychnine and found that a single amino acid changes the entire synthetic pathway: Both biosynthetic pathways are based on a common intermediate (pictured above). However, an acetyltransferase in the plant that produces diaboline has a slightly different amino acid sequence in S. nux-vomica, making it a malonyltransferase. Instead of attaching an acetyl group to the indoline nitrogen to form diaboline, the enzyme attaches a malonyl group to the indoline nitrogen to form pre-strychnine which is then transformed to strychnine.

The final step of the biosynthesis – the conversion of pre-strychnine to strychnine – seems to occur spontaneously, catalyzed by the acidic conditions in the plant and not with the help of an enzyme. This was suggested by experiments with radiolabeled strychnine precursors in S. nux-vomica.

The nightmarish effects of strychnine are nothing compared to its systematic name, which hints at how difficult it is to make

Focus: Agatha Christie: The Chemistry of a (Nearly) Perfect Murder

Just how toxic is strychnine, and why?