Schrödinger’s cat is the protagonist of a famous thought experiment by Austrian physicist Erwin Schrödinger. He used it to illustrate the possible paradox that arises when the Copenhagen interpretation of quantum mechanics is applied to everyday objects.

The Copenhagen interpretation was devised between 1925 and 1927 by Niels Bohr and Werner Heisenberg. It states that physical systems governed by quantum mechanics generally do not have definite properties before they are measured. Instead, an object can exist in a superposition of several states, i.e., it has different properties at the same time. A quantum object can, for example, be in two places at once or have two different speeds at the same time. These states have different probabilities, described by the object’s wavefunction. The many possible states are reduced to a single value when a measurement is performed; the wavefunction is said to “collapse”. 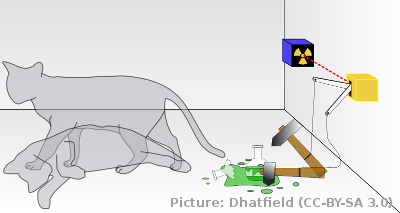 Schrödinger’s thought experiment relates the properties of such a small, quantum-mechanical system (a radioactive substance), to an everyday, large object (a cat).

The experiment is set up like this (pictured right): A cat is locked in a chamber with a radioactive substance. A Geiger counter measures whether an atom of the radioactive substance decays and emits radiation. If radiation is detected, a flask filled with poisonous hydrogen cyanide in the chamber is smashed, and the cat dies. If no atom decays, no radiation is detected, and the cat lives. Until one looks in the box, i.e., measures the state of the system, one cannot know if the cat is alive or dead.

If the probability of radioactive decay over a specific time is, e.g., 50 %, the cat’s wavefunction after that time would describe it as equal parts alive and dead. Schrödinger considered this impossible and concluded that the Copenhagen interpretation must be flawed.

Other interpretations of quantum mechanics, such as the many-worlds interpretation, where reality splits into different branches for all the possible states, have been proposed. The philosophical question posed by the paradox is debated to this day.

Schrödinger’s cat is the answer to Guess the Character (2).