Mycobacterium tuberculosis is the pathogeic bacteria causing tuberculosis (TB), a disease afflicting millions every year. Although the incidence of TB has decreased in the past decade, it still remains as one of the top causes of death from an infectious disease, especially in developing countries. The development of multidrug-resistant strains of the bacteria is another challenge that antiinfectives researchers face now.

Professor Rolf Hartmann of the Helmholtz Institute for Pharmaceutical Research in Saarland, Germany, talks with Dr. David Peralta, Managing Editor of ChemMedChem, about his lab’s recent contribution in the fight against M. tuberculosis and the future of antibiotics research.

Could you please briefly explain the focus and findings of your article just published in ChemMedChem to a nonspecialist?

For survival of M. tuberculosis in the human host, it is essential that the bacteria can detoxify cholesterol. 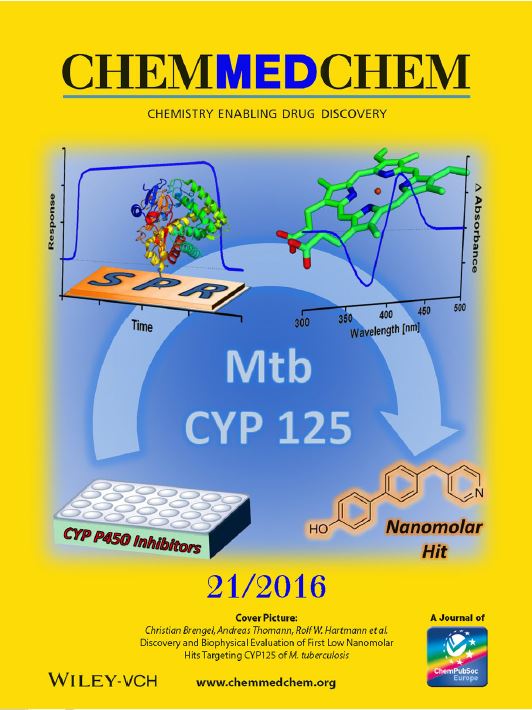 In this process, the bacterial monooxygenase CYP125 (an enzyme that hydroxylates, or adds an “–OH” to the substrate) plays an important role. With a focused compound library, we used a special spectroscopy technique and heme-binding assays to identify compounds that bind to CYP125 and complex the catalytic iron, which is essential in the oxygenation of the substrate. By inhibition of this detoxifying process, such compounds would lead to bacterial death.

Nanomolar hit compounds were identified and evaluated for selectivity towards human CYP enzymes. The most selective compounds could be starting points for the development of drugs for the treatment of tuberculosis.

What was the inspiration behind this study?

CYP125 belongs to a group of unique mycobacterial CYP enzymes and is essential for survival of M. tuberculosis. Accordingly, it was hypothesized to be a novel target for the treatment of the respective infection. Given our long-lasting experience in the development of human CYP enzyme inhibitors, we are in a good position to explore this potential target for the development of a new antibacterial drug. The present paper describes the first steps toward this aim.

Why did you focus on this particular disease specifically?

Our mission at the Helmholtz Institute for Pharmaceutical Research Saarland (HIPS) is the discovery and development of new antibacterial compounds. Especially compounds with novel modes of action are of importance to circumvent resistances increasingly developing in many bacterial infections. A very problematic infection in this regard is tuberculosis, which, according to the WHO, leads to nine million new infections and 1.5 million cases of deaths per year.

What distinguishes your work from other established therapies for M. tuberculosis?

Until today, there are no drugs available interfering with the CYP enzymes of M. tuberculosis. Therefore, cross resistance between a regular antibiotic and an antimycobacterial CYP inhibitor drug is unlikely to exist. Besides, exploiting CYP125 as a potential therapeutic target could lead to new fascinating insights into the communication between mycobacteria and host cells.

Which part of your work (for both this paper and in general) proved the most challenging?

A very challenging aspect in the antiinfectives field is the complex bacterial cell envelope, which acts as permeation barrier for compounds. In contrast to human targets, where mammalian cell membranes function as barriers, there are no reliable rules for the medicinal chemist available to solve the problem of crossing these borders. In other words, a good antibacterial compound must not only be able to reach the site of infection in the human body but also the intrabacterial target.

After having identified highly active and selective inhibitors in CYP125 protein assay, in the next step, we will address the relevant cellular systems. Because of the mode of action of the compounds, which inhibit the detoxification of cholesterol from the human host in the bacteria, further in vitro and in vivo experiments are planned.

These results and other investigations will be the basis for further structure optimizations of the compounds addressing the needs of an application in the human patient. In the long run, we are interested in combining different mycobacterial CYP inhibitors to highly active drug cocktails for the efficient treatment of tuberculosis.

How do you see the future of antibiotic research in light of current problems with drug resistance?

Steadily increasing resistance against current antibiotics is indeed a major problem for public health. In contrast to the 60s and 70s of the last century, where the pharmaceutical industry was strongly involved in the development of new antibacterials, only very few companies are still active in this field. On the other hand, research activities from academic institutions have increased. To bridge the gap between academic research and the application in patients, strategic governmental efforts are strongly needed.

In Germany, the Helmholtz Centre for Infection Research (HZI) in Braunschweig, the HIPS as a part of this Centre, and the DZIF (German Centre for Infection Research) are strongly engaged in the field of antiinfectives research. Together with similar efforts in other countries there is the chance to improve the clinical situation of patients infected with bacteria resistant to regular antibiotics.

Regarding special research efforts, searching for new natural compounds with antibacterial activities is still a promising strategy. In addition, future efforts should focus on compounds with modes of action, which do not increase the selection pressure, as selection pressure is known to inevitably lead to resistance development. Such strategies could make use of compounds interfering with bacterial quorum sensing systems, which are responsible for the interbacterial communication regulating important pathogenicity traits like virulence and biofilm formation, or other “pathoblockers”.