This year’s Winter Conference on Medicinal and Bioorganic Chemistry (WCMBC) was a spectacular way to wrap up the first month of 2011 for those fortunate enough to attend. This meeting series is quite well established despite its relative youth, and has been a significant draw for top-notch chemists since the first meeting was held in 1995. Every two years since, Steamboat Springs, Colorado has been host to the WCMBC, providing a unique and picturesque setting for scientists from both industry and academia to present cutting-edge results, to exchange and discuss new ideas, and to establish new contacts. All this takes place within a cleverly planned conference schedule that provides a healthy and inviting balance between scientific discussion and winter outdoor activities, the most popular of which is, of course, alpine skiing. 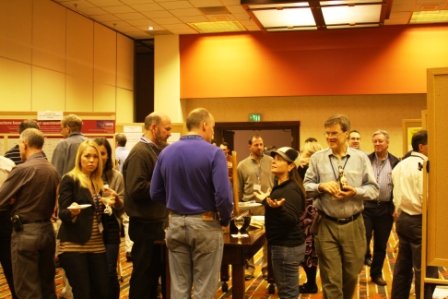 Attendance at the WCMBC series is steadily growing, yet has remained small enough to keep the sessions intimate and conducive to informal discussion. There were about 120 delegates at this year’s conference, many of whom were present for the first time, along with a significant number of returning attendees. The meeting lasts four and a half days, and even early on, it was clear why the WCMBC is such an attractive series: the overall session topics are timely, and the invited speakers are at the tops of their respective fields.

This year’s meeting covered a wide range of subjects. The first evening’s session, hosted by Dr. Philippe Nantermet (Merck), was focused on overcoming problems in bioavailability for agents with poor physical properties. Dr. John Higgins (Merck) presented a survey of drug delivery and solid-state chemistry tools to enhance and control drug absorption. Dr. Nair Rodriguez-Hornedo (University of Michigan, USA) discussed ways to increase the likelihood of success in generating drug–drug co-crystals. Prof. Valentino Stella (University of Kansas, USA) emphasized the importance of keeping drug delivery in mind when designing drugs, during his talk on the use of prodrugs to modify poor physical drug properties. Dr. Jennifer Riggs-Sauthier (Nektar Therapeutics) then discussed her company’s advanced polymer conjugation technology as a way to improve the bioavailability of small-molecule drugs.

The next morning’s session on irreversible P450 enzyme inhibitors was hosted by Dr. Dan Flynn (Deciphera Pharmaceuticals) and Dr. Paul Pearson (Pearson Pharma Partners), the latter of whom started the morning by presenting his work in the kinetics and mechanisms of time-dependent inactivation of cytochrome P450. This was followed by insightful talks by Dr. Robert Walsky (Pfizer), Dr. Jan Wahlstrom (Amgen), and Dr. Dan Rock (Amgen), all of whom discussed particular aspects of time- and mechanism-based inhibition of cytochrome P450, its implications and utility in the drug discovery process. 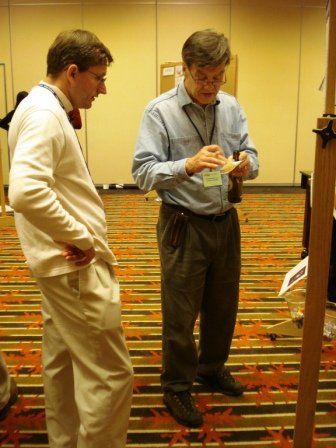 Catalysis was the topic for Tuesday morning’s session hosted by Prof. Victor Snieckus (Queens University, Kingston, Canada). Prof. John Hartwig (University of Illinois, Urbana-Champaign, USA) kicked off a series of very interesting talks given by experts in this broad field with a presentation of catalytic transformations of arenes. This was followed by Dr. Scott Schultz’s talk on Merck’s development of catalytic reactions via high-throughput experimentation. Prof. Tomas Hudlicky (Brock University, St. Catharines, Canada) then highlighted the advantages of enzymatic catalysis in the asymmetric total synthesis of natural products and pharmaceuticals. Dr. Klaus Dietrich (BASF) provided a glimpse of modern applications in industrial scale-up with his discussion of BASF’s ChiPros optically active intermediates.

The session on Wednesday morning chaired by Dr. Matt Hayward (Pfizer) involved a series of general papers presented by researchers mostly in the pharmaceutical industry, with the treatment of neurological disorders being a dominant theme. Dr. Michael Brodney (Pfizer) discussed spirocyclic sulfamides as β-secretase inhibitors, and Dr. Jeremy Major (Cellzome) presented his company’s discovery of γ-secretase inhibitors; these two talks provided complementary perspectives into how large- and smaller-scale companies are addressing the growing need for Alzheimer’s disease treatments. Treating schizophrenia was the unifying theme behind the presentations of Dr. Scott Wolkenberg and Dr. Vadim Dudkin (both at Merck); the former focused on catechol-O-methyltransferase inhibitors, while the latter covered the discovery and optimization of mGluR2 positive allost 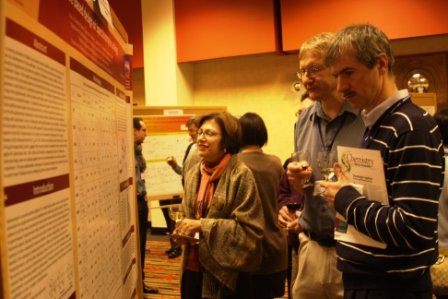 Wednesday evening’s session chaired by Prof. Michael VanNieuwenhze (Indiana University, USA) involved two late-breaking talks: the first was given by Prof. Dave Williams (Indiana University), who discussed his research group’s work in marine natural products, specifically regarding the total synthesis of the 16-membered macrolide peloruside B, a cytostatic and cytotoxic compound that acts by stabilizing microtubule assemblies. The second was given by Dr. Stanley Chamberlain (Inhibitex), who presented his company’s new prodrug INX-08189, an inhibitor of hepatitis C polymerase. 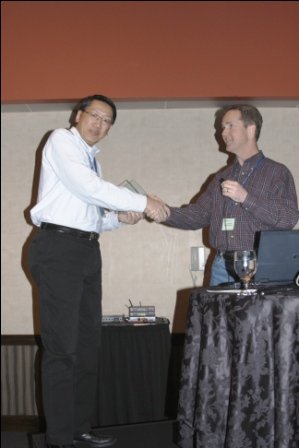 An enlightening and casual poster session was followed by the keynote presentation given by Distinguished Lilly Scholar Dr. Joe Shih, currently the Executive Vice President of Crown Bioscience. Dr. Shih discussed the lessons learnt from his years of experience at Eli Lilly in a talk entitled The Evolution of Cancer Drug Discovery: From the Cytotoxic Paradigm to Targeted Therapeutics. It was a thoroughly engaging look into the long-term experience of an anticancer drug discovery effort, and a rare opportunity to see such an extensive amount of work from Dr. Shih’s unique perspective. (Picture: Dr. Bryan Norman, right, presents the keynote award to Dr. Joe Shih before his presentation)

Another testament to the overall success of the WCMBC series is the fact that the final session of the last day was very well attended; a full house was present for the session on epigenetics, hosted by Dr. Thomas Miller (Merck), who got things started with his talk entitled Epigenetics: HDACs and Beyond. This was followed by the presentation of Dr. Anthony Gangloff (Takeda San Diego), which covered the synthesis and biological activity of imidazole and benzimidazole inhibitors of histone deacetylases (HDACs). Dr. Richard Chesworth (Epizyme) presented his group’s work on the chemical biology of histone methyl transferases, and Dr. Stephen Shuttleworth (Karus Therapeutics) discussed the potential to treat both immune/inflammatory diseases and cancer (via kinase inhibition) with new classes of HDAC inhibitors. 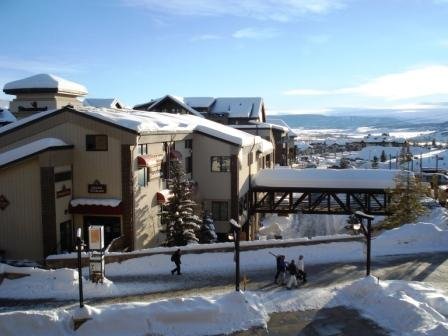 In addition to skiing (alpine or cross-country), snowshoeing, or just relaxing in town, another important feature — indeed a traditional fixture — of the WCMBC is the hockey game series. As mentioned briefly above, Amgen’s John Allen is no stranger to this sport, and it’s clear the same is true for a handful of other scientists who show fearless proficiency on the ice. It may stand to reason that two of the time-honored advocates and players of WCMBC hockey, Professors Victor Snieckus (Queens University) and Tomas Hudlicky (Brock University), are based in Canada. Both chemists are seasoned hockey players, and do their best so ensure their country’s national pastime is well represented every two years in this Colorado mountain town. Anyone with equipment and a will to play are welcome to join a team, regardless of skill level.

The WCMBC league’s two rival teams, (R)-‘academia’ in blue and (S)-‘industry’ in white, generally mirror each other in overall skill level. This year’s well-matched game had the crowd at the edge of their seats, as team S brought an end to team R‘s five-game 2001–2009 winning streak. The players in white finally reclaimed the Cup since their 1999 victory. 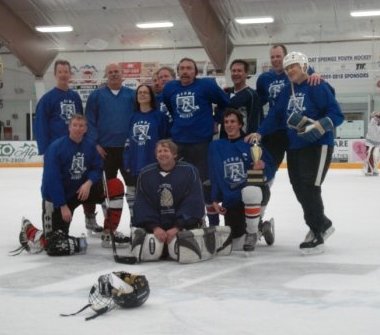 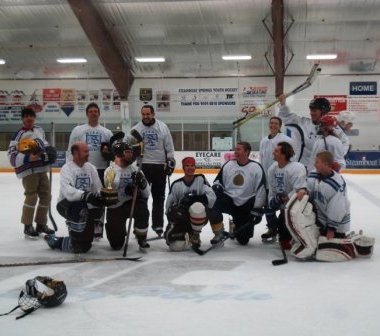 Team R (left) relinquishes the WCMBC Cup after a decade of undefeated play while a jubilant Team S (right) savors the thrill of victory.

The alert reader might wonder why 2011 wasn’t actually the 9th meeting for a biennial series that began in 1995. In 2006, an additional WCMBC was held in Clearwater Beach, Florida as an alternative setting. Evidently the warm sun, sand, and surf couldn’t win over even the winter-weariest of scientists quite as much as the unparalleled “champagne powder” of Steamboat’s slopes. And so the meeting series continues thus, with plenty of snow, skis, ice, and flying pucks, as a true winter conference. The next WCMBC is scheduled for January 19–25, 2013. Just under two years away, it’s not too early to mark your calendar!

This conference series is managed by the non-profit Medicinal and Bioorganic Chemistry Foundation (MBCF), the primary initiative of which is the organization of these meetings. The MBCF Board consists of prominent members of the medicinal and bioorganic chemistry community, representing years of expertise in academic and private-sector research. The MBCF Board makes a point to ensure attendance is accessible to all: registration fees cover the conference costs, and graduate student fellowships are available.