Azafullerenes are homologues of the corresponding all-carbon fullerenes obtained by replacement of one or more carbon atoms of the fullerene cage with nitrogen. 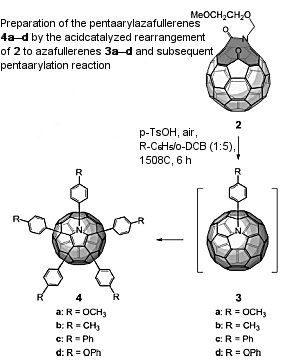 The compounds were isolated from the acid-catalyzed reaction of a C59N precursor with electron-rich aromatic compounds.
The Cs-symmetrical addition pattern was confirmed by X-ray crystal structure analysis of one of the pentaarylazafullerenes.

The team was also able to isolate and characterize a number of tri- and tetraaryl[C59N] adducts involving the same addition pattern but containing one or two H atoms instead of aryl rings as addends. These remarkable molecules represent the first examples of multihydroheterofullerenes that are intermediates in the pentaarylation cascade.

The exploration of further chemical and physical properties of this new family of heterofullerenes is currently under way.