The 7th Science Slam German Championship took place in the Darmstadtium Science and Congress Center in Darmstadt on December 17 [1]. A full house of 1400 members of the public was thoroughly entertained and all left with a better understanding of different aspects of science – the clear aim of the Science Slammers and the organizers of the event.

After introductory remarks from the Mayor of Darmstadt Jochen Partsch about the delight that ten years after the inaugural Science Slam, the German Championship had returned home to the “City of Science”, the hosts for the evening Alex Dreppec and Alex Röthemeyer, key players in the development of the original idea of Science Slam took charge of proceedings.

The evening featured eight finalists who had won through to the final from four regional events across Germany in Ravensburg, Cologne, Hamburg, and Dresden. The running order for the Slammers was then drawn and a taster for what was to come was then given by Boris Lemmer, winner of the championship in Hamburg in 2011 who spoke about what’s inside a proton.

Each Slammer was then given ten minutes to present their work using whatever multimedia technology or visual aids and props they considered the best means to get across their science in the most entertaining and informative way to the diverse audience. The finalists presented their research on a wide variety of topics:

The jury, which had been chosen from ten groups in the audience to ensure a range of ages, gender, and interests, rated each Slammer for both the science (“Hirn”) and the presentation (“Darm”). The scores for each presentation were then held aloft from the audience members and noted in the results table. Similar to many sporting events the highest and lowest score from each set for each contestant were deleted and the final mark was then presented. 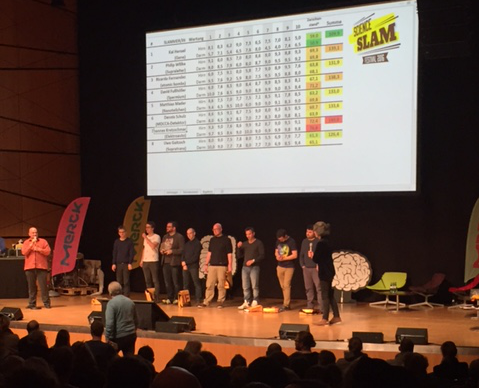 Figure 1. Slammer in front of the results table.

After a highly entertaining evening enjoyed by all in attendance, Johannes Kretzschmar, a computer scientist from Dresden was crowned the 7th German Science Slam Champion. His presentation “Frankensteins Electroauto” featured a fantastic mixture of science, comedy, and cartoons – he also works as freelance illustrator and cartoonist. Faced with designing models for electromobility of commercial utility vehicles he described the process and problems he encountered on the way, managing to incorporate some neurobiology and artificial intelligence en route, before landing at a black box answer [2]. In line with tradition the prize was awarded by the winner from previous year, in this case Martin Schrön.

The idea for Science Slam originated from poetry slammer Alex Dreppec [3] (co-host for this event) and Dr. Alex Deppert back in 2001. The concept was then submitted in 2004 to Darmstadt Marketing, and Axel Röthemeyer (co-host for this event) was excited and enthralled by the idea of communicating current science to a diverse audience in an entertaining and informative way using a variety of visual aids and analogies. The first Science Slam took place in 2006 in Darmstadt, and then the idea spread first across Germany and then international. The first German championship took place in Braunschweig in 2010 and was won by Martin Buchholz whose motto is “whether teaching or Slam – good scientific communication must always be oriented to the audience” [4].

Copenhagen hosted the first European Science Slam championship in 2014 in front of 900 people. In the meantime more than 60 cities in Germany host their own regular Science Slam events. The events are becoming increasingly popular in many other countries throughout the world. Many examples of the great talks given by Science Slammers given in English can be found on “Science Slam English” on YouTube [5].

One of the best known female Science Slammers is the chemist Mai-Thi Nguyen Kim, who did her diploma in Mainz, Germany, her Masters at the Massachusetts Institute of Technology (MIT), USA, and her PhD at the DWI Leibnitz Institute for Interactive Materials in Aachen, Germany, and at Harvard, USA. She has used her love of hip hop together with The Campus Dance Crew to explain her research on how to attack cancer cells without damaging healthy cells in the video “Dancing Drug Delivery”. Mai-Thi featured in a recent TEDxBerlin lecture “Making Science Cool” [6] and has many other videos on Youtube giving helpful and entertaining insights into science and chemistry (mainly in German).

Check out where the next Science Slam is near you or look to organize one at your own [7]. It is clear that they serve a need to help the general public better understand science and scientists, which is extremely important for the future of science especially given some of the recent developments. 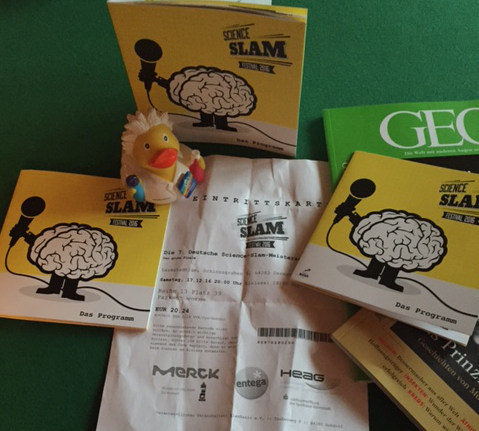 Fugure 2. Chemquackers is amazed by the Science Slam Campionship.