Waste from used electrical and electronic equipment – commonly known as e-waste or WEEE – is one of the fastest growing solid waste streams around the world today. The rapid uptake of information technology around the world, coupled with the advent of new designs and technologies at regular intervals is causing the early obsolescence of much electrical and electronic equipment (EEE). In the United States, believed to produce the largest amounts of e-waste in the world, it is estimated that over 100 million computers, monitors and televisions become obsolete each year and that amount is growing year on year [1]. In the European Union (EU), the total generation of e-waste in 2005 was estimated to be 9.3 million tonnes which included 40 million personal computers and 32 million televisions [2]. The same scenario applies to mobile phones and other hand held electronic items used in the present society. Each year over 130 million mobile phones in the United States and over 105 million mobile phones in Europe reach their end-of-life and are thrown away [3]. As a result, e-waste has become a serious social problem and an environmental threat to many countries worldwide. The United Nations estimate that, collectively, the world generates 20 to 50 million tonnes of e-waste every year [4].

The latest report released by the United Nations [5] predicts that by 2020 e-waste from old computers in South Africa and China will have jumped by 200–400 % and by 500 % in India compared to 2007 levels. It also states that by 2020 e-waste from discarded mobile phones will be about 7 times higher than 2007 in China and 18 times higher in India. The report also cites that in the United States more than 150 million mobiles and pagers were sold in 2008, up from 90 million five years before, and globally more than 1 billion mobile phones were sold in 2007, up from 896 million in 2006. The UN report also estimates that countries like Senegal and Uganda can expect e-waste flows from personal computers alone to increase 4 to 8-fold by 2020. 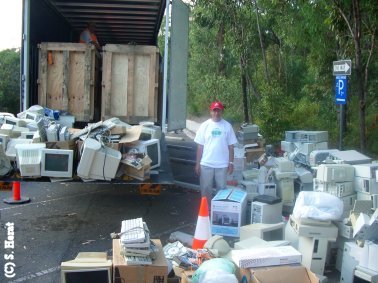 There are growing concerns that most of the e-waste generated in developed countries is ending up in developing countries that are economically challenged and lack the infrastructure for environmentally sound management of e-waste. This results in adverse socio-economic, public health and environmental impact of toxins in e-waste. A study conducted in soil, air dust and human hair collected from an e-waste recycling site in Bangalore, India, clearly found increased concentrations of trace elements such as lead, zinc, silver, cadmium and copper compared to reference sites [6]. A further study in China on human scalp hair, assessing the extent of heavy metal exposure to workers and residents in areas with significantly high e-waste recycling operations, found higher levels of cadmium, copper and lead confirming the previous findings [7].

A toxicity study of sediments collected from two rivers in Guiyu, China, where significant amount of informal e-waste recycling is taking place, showed that most sediments exhibited acute toxicity due to elevated levels of heavy metals and other chemicals and low pH caused by uncontrolled acid discharge [8]. Furthermore, a study of heavy metals (copper, cadmium, lead, zinc, arsenic, mercury) and persistent organic compounds including polycyclic hydrocarbons (PAHs) and polychlorinated biphenyls (PCBs) conducted in Wenling, an emerging e-waste recycling facility in Taizhou area, China, found high levels of the above compared to reference sites [9]. China and India are not the only countries impacted by e-waste. A number of other countries in Asia including Philippines, Hong Kong, Indonesia, Sri Lanka, Pakistan, Bangladesh, Malaysia and Vietnam and also a number of countries in Africa including Nigeria, Kenya, Senegal and Ghana are the latest targets for dumping e-waste generated in advanced economies. Managing e-waste in these countries is not easy given that most developing countries have neither a well-established system for separation, storage, transportation, treatment and disposal of waste nor any effective enforcement related to managing e-waste. Thus, co-disposal of e-waste with domestic waste in open dumps is generally practiced in many developing countries causing severe damage to the environment and human health.

E-waste also contains brominated flame retardants (BFRs) such as polybrominated biphenyls (PBB) and polybrominated diphenylethers (PBDEs) which are used in printed circuit boards, connectors, covers and cables. A recent comprehensive review conducted by A. Sepulveda et al., where scientific data related to concentrations of lead (Pb), PBDEs, polychlorinated dioxins and furans were monitored around e-waste recycling areas in China and India. This highlighted the very high levels of the aforementioned compounds in air, dust, soil and water samples, which at times considerably exceeded the concentration levels found in other industrial urban areas. These findings are further confirmed by studies conducted by Ni et al. [11] where they found high concentrations of above compounds in e-waste recycling sites in China.

The above mentioned threats from the ever growing e-waste stream can only be minimised by producing less of it through application of concepts such as green chemistry and design for environment where alternatives to toxic materials can be found. Good examples of this include the development substitution of toxic raw materials with less toxic materials as in the case of Pb-free soldering and the development of halogen-free BFRs in electronics manufacture.

Dr. Sunil Herat is a Senior Lecturer in Waste Management at Griffith University, Brisbane, Australia. His research interests include solid waste management in developing countries, implementing cleaner production practices and how different countries deal with the problem of used electrical and electronic equipment waste with special interest in developing countries.

Dr. Herat has published numerous research papers in international peer-reviewed journals on various aspects related to e-waste. He has also presented at international conferences and appeared in a number of media interviews. He is an expert on e-waste under the United Nations Regional 3R Forum of Asia program.