The existing approaches used to detect circulating cancer cells require extensive sample preparation and/or complex surface microstructures to detect the extremely low quantity of tumor cells in blood. A team of researchers led by Liangfang Zhang and Joseph Wang, University of California – San Diego, USA, have come up with a new method to pickup and transport cancer cell payloads under physiological conditions and without sample processing.

They achieved this breakthrough by using self-propelled micromachines, which are actually microtubes consisting of gold and platinum layers. These layers are involved in the catalytic formation of oxygen bubbles on the inner platinum surface. Ejection of the bubbles from the end of the tube propels it forward, like a rocket. In dilute human serum, the microrocket was able to reach the relatively high speed of 85 μms–1.

Wang, Zhang, and co-workers then functionalized the outer gold layer of the microrockets with antibodies that can target and “catch” pancreatic cancer cells in biological fluids (Fig. 1). The microrockets were able to tow the cancer cells at a rate that was only marginally reduced compared to the unloaded microrocket.

This new in vitro approach holds promise for designing powerful bioanalytical protocols and microchip devices for early-stage detection of tumor cells. Furthermore, as stated by one of the referees of this paper: “These results will open a new field not only in the science of catalytic micromachines, but also for microfluidics, and biosensors.” 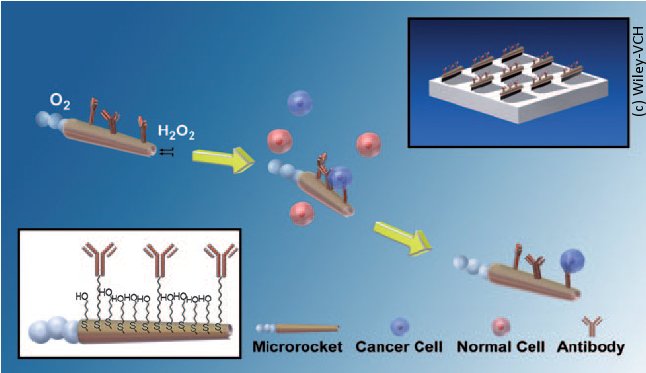 Figure 1. Microrockets for capture and isolation of cancer cells. Upon encountering the cells, the antibody-modified microrockets recognize the surface antigens on the target cancer cells, allowing their selective pickup and transport. The top-right and bottom-left insets illustrate the preparation of the microrockets and their functionalization, respectively.

► Six fascinating movies that show the motion of these microrockets as well as their ability to selectively pickup and transport pancreatic cancer cells are available online.