The word chirality, or right- and left-handedness, comes from the Greek χειρ for “hand”. It is used for structures which can not be superimposed on their mirror image (such as human hands), and instead, exist in two distinct left and right configurations. Chirality occurs in many places in nature and has been copied by humans, e.g., in architecture.

Right- or Left-Handedness of Spirals

Spirals (or helices) can be either right- or left-handed. This assignment is independent of the direction of view (i.e., from the top or the bottom in the picture below) 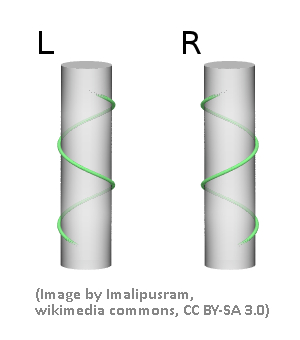 Winding columns are a decorative form typical of the Baroque, but also found in other periods. They were used, e.g., in church altars. To create the optical effects pictured below, two mirror-inverted columns had to be produced separately. Owing to the chiral nature of helices, one could not just cut one long pillar with a single handedness, or the resulting altar would violate mirror symmetry. 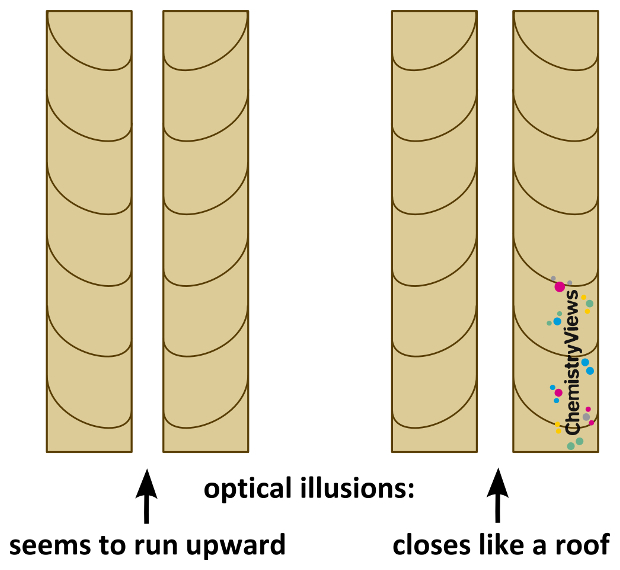 Spiral staircases are predominantly left-handed. Well-known exceptions are found in the Vatican Museum and the glass dome of the German Reichstag. The railing on a spiral staircase is usually placed on the outside. According to one theory, the staircases are left-handed to allow right-handed people to hold on to the railing and walk on the outer, wider part of the steps when coming down the stairs. This should reduce the danger of falling, at least for the larger right-handed population. 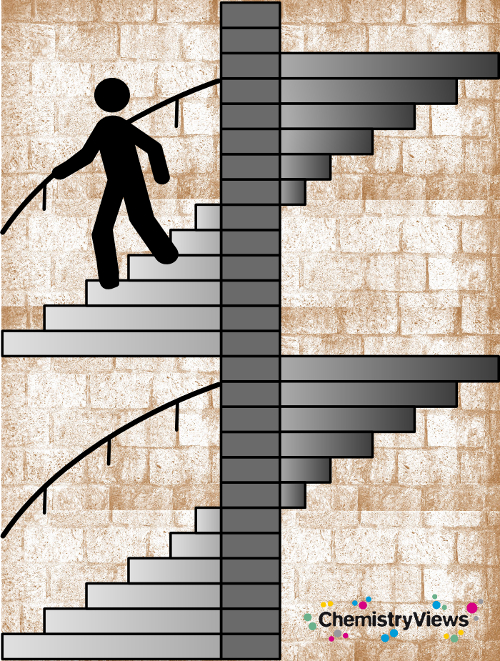 Another theory explaining the left-handedness of spiral staircases leads to the Middle Ages. For strategic reasons, the Lord of a castle would prefer staircases turning to the left so that a right-handed defender has the advantage while swinging their sword over intruders coming from below. 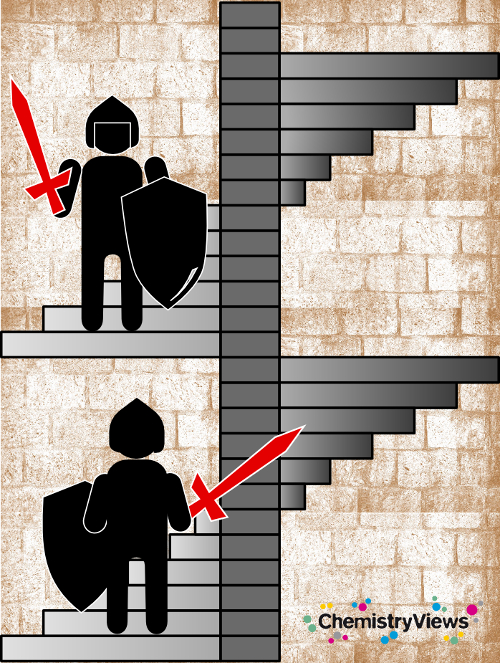 Screws are usually right-handed. This, again, can be explained in terms of making it easier for right-handed people. When a screw is screwed in, more force must be applied than when unscrewing it. The muscles of the right arm generally can create more force moving clockwise (right) than counterclockwise (left), which makes right-handed screws easier to screw in. 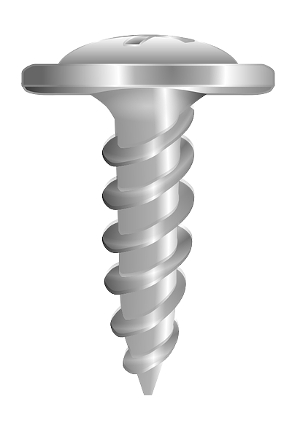 The shells of burgundy snails are almost always right-handed, with a right-to-left ratio of about 20,000 to 1. Since their organs have the same chirality as their shell, only snails of the same handedness can mate without problems. 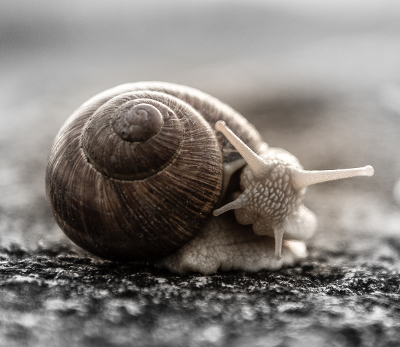 DNA, the carrier of genetic information, is a right-handed double helix. 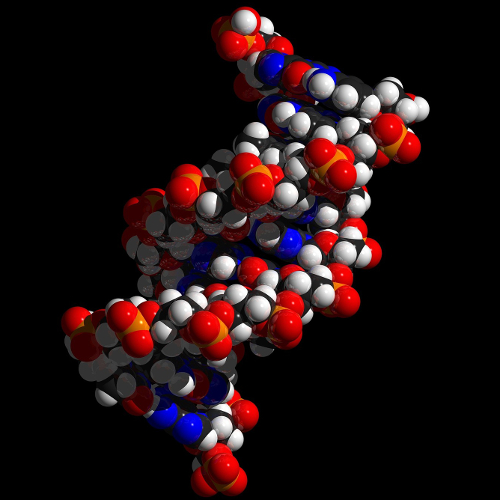 Molecules that are not helical like DNA can also be chiral, as long as they cannot be superimposed with their mirror image. There are two notations for their different configurations: The older D/L system is often used for biomolecules such as sugars and amino acids and assigns a relative configuration to the entire molecule, and the R/S system assigns a so-called “absolute configuration” to a single chiral center. A chiral center is most often a carbon atom with four different substituents.

D and L come from the Latin dexter and laevus for right and left, while R and S come from rectus and sinister for right-handed and left-handed. Since the assignments are based on different rules, a D configuration must not always coincide with an R configuration for a single molecule, and the same applies to L and S.

Sugars occur in nature almost exclusively in a D configuration. The human metabolism would not be able to use their mirrored forms. Glyceraldehyde (pictured below) is the simplest aldose sugar. The structure on the top is the basis for the so-called Fischer projection, which is used to assign D and L configurations based only on the position of the colored OH group. The structure below is used to assign R and S configurations based on the arrangement of all substituents, sorted by priority using the so-called Cahn–Ingold–Prelog (CIP) rules. 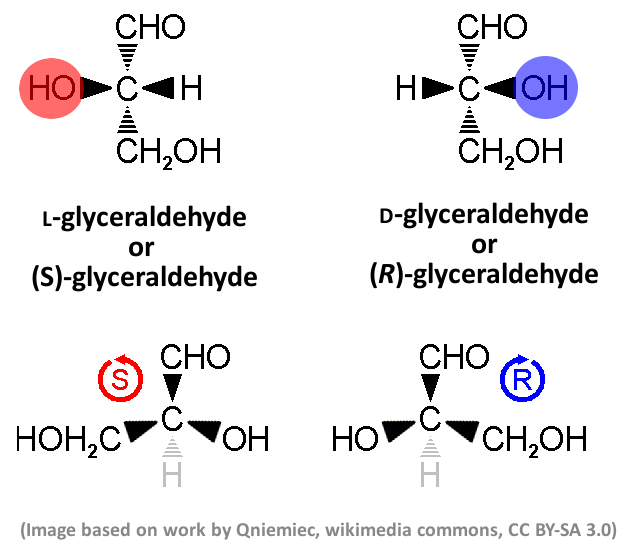 Only L-amino acids are found in proteins in nature. Exceptions are D-alanine in the cell walls of bacteria and in frog skin. During aging, D-aspartic acid accumulates in the lens of the eye and in the dentin of teeth (the hard substance beneath the enamel). The latter effect can be used to determine the age of skeletons. 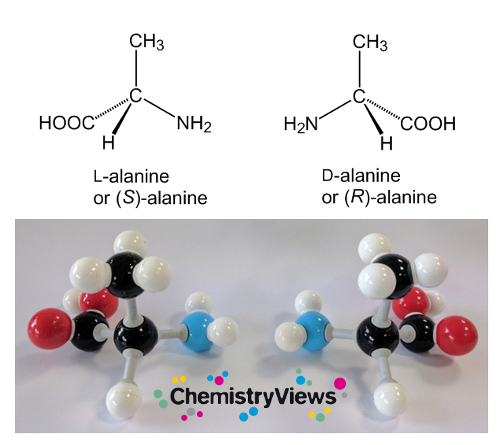 While different mirror images of the same molecule mostly have the same physical and chemical properties, there are differences when they interact with, e.g., biological systems, other chiral molecules, or polarized light. One example for this is the different smell of the D– and L-forms of some compounds. 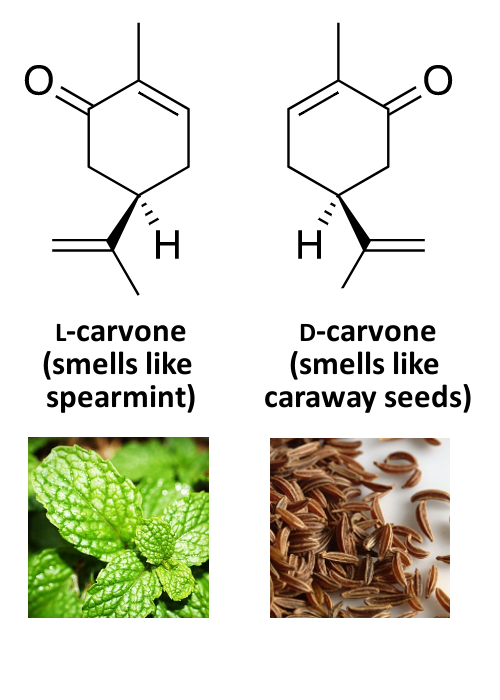