Biswarup Jash and Jens Müller, University of Münster, Germany, have prepared the phenanthroline-derived nucleobase surrogate, 1H-imidazo[4,5-f][1,10]phenanthroline) (P in the picture). This molecule can discriminate the pyrimidine nucleobases cytosine (C) and thymine (T). In the presence of AgI ions, P–C pairs are stabilized by P–AgI–C bonds, whereas P–T pairs are strongly destabilized. This site-specific metal binding can be used to differentiate between nucleobases at certain positions in a DNA strand. To detect the difference between C and T, the researchers developed a molecular beacon that responds to the formation of a stabilized P–AgI–C pair by strong fluorescence. 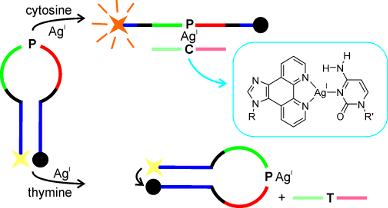 By using this system, it was possible to detect medically relevant single molecule polymorphisms. They lead to DNA variants with different bases at a certain position. These small changes have been shown to signalize differing risks of developing cancer. This information could help design individualized drugs or plan protection against several diseases.