Mutations of a single DNA nucleotide, or single-nucleotide polymorphisms (SNPs), are emerging as a new generation of genetic markers. Numerous strategies for SNP genotyping have been developed, but these methods usually require multiple manipulations, technical expertise, and expensive instruments, all of which makes them unsuitable for point-of-care testing.

Hyun Gyu Park and co-workers at KAIST, Republic of Korea, have reported a simple method for identifying SNPs based on the red-to-blue color change that occurs upon salt-induced gold nanoparticle (AuNP) aggregation.

Four thiol-labeled primers that differed only in the base at the 3’-terminal position were used to perform four polymerase chain reactions (PCRs) with the target DNA. Only when the terminal base was complementary to the SNP did PCR amplification occur. In a second step, AuNPs and salt were added to the mixtures. The amplified PCR product bound to the AuNPs and prevented them from aggregating, so this solution remained red, whereas the other three turned blue, thus indicating the genotype of the SNP site. 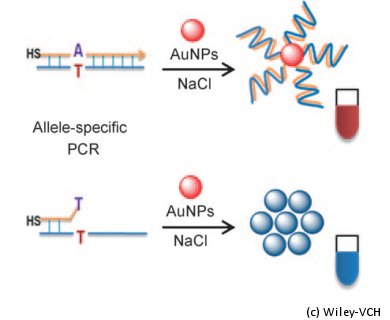