Extracts of the Schisandraceae family of plants have been used in traditional medicine for thousands of years. Among the bioactive components are several nortriterpenoids that feature complex polyoxygenated ring systems with numerous stereocenters. These nortriterpenoids exhibit moderate anti-HIV activity as well as low toxicity, making them possible drug leads. Research on efficient routes for the total synthesis of the compounds is still ongoing.

Edward Anderson, University of Oxford, UK, and colleagues have synthesized rubriflordilactone A through the assembly of two AB ring aldehydes (14 and 15 in the retrosynthetic scheme below) for combination with a common diyne component (13). The team had to first make these precursors on a large scale before they employed palladium and cobalt-catalyzed polycyclizations to construct the central pentasubstituted arene. 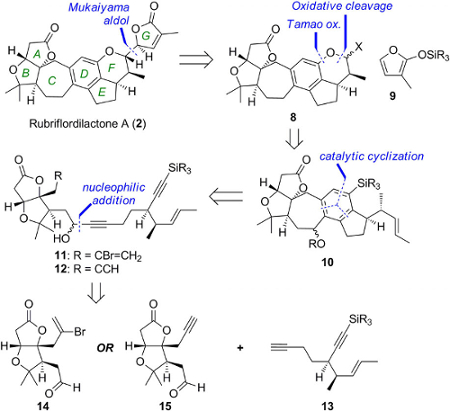 The researchers achieved an approximate yield of 7–11 % depending on which building blocks and synthetic route they used. The final step of the synthesis afforded a 38 % yield of the desired compound, with 33 % of its epimer. The researchers confirmed the structure through NMR spectroscopy. The modular nature of the synthesis renders it suitable for application to other compounds of the Schisandraceae family.