Bringing together different experiences and being able to discuss intensively based on shared as well as diverging viewpoints has been an amazing inspiration. Professor Rolf Huisgen (pictured left), Professor Martin Breugst (middle), and Professor Hans-Ulrich Reissig (right) are three German organic chemists, born between 1920 and 1980. Dr. Charlotte Gers-Panther spoke with them for ChemViews Magazine about their research, their cooperation and what they have learned and envy from each other.

What do you find most fascinating in physical-organic chemistry?

Hans-Ulrich Reissig: In physical organic chemistry, I appreciate the potential to understand reactions and to make predictions, whereas in synthesis the research is open for creativity and serendipity, and it also requires persistence. The opportunity to “play” with molecules is something I very much enjoy.

Martin Breugst: For me personally, the most important question has always been related to why or how things happened. As a consequence, the combination of synthetic experiments, kinetic and spectroscopic investigations, and computational tools has fascinated me from the beginning.

Your most recent article in the European Journal of Organic Chemistry is a study that combines theory and experiment [1]. Could you outline the importance of combining organic synthesis and theoretical calculations in the field of physical-organic chemistry?

Martin Breugst: In the last decades, computational chemistry has evolved to become a useful tool to understand reactivities and selectivities of various chemical reactions. On the one hand, computational investigations allow the investigation of short-lived intermediates that are often challenging to observe experimentally. On the other hand, quantum mechanical techniques enable the direct comparison of different mechanistic pathways, which can help to identify improved reaction conditions or catalyst structures.

Who or what has inspired you most in the field of physical-organic chemistry?

Hans-Ulrich Reissig: Of course, I was highly inspired and influenced by the research and the brilliant lectures of my teacher Rolf Huisgen. I very much like cycloadditions, and we also used them in synthetic applications. Already as a student, I met Ken Houk when he was a still young professor, and I had the chance to discuss my research with him. I very much appreciate his contributions to the progress in computational chemistry, which help a lot to understand what we are doing in synthesis.

What is your favorite piece of research?

Hans-Ulrich Reissig: I still admire the strychnine synthesis of Woodward and I am proud that we could achieve a very short approach to this landmark natural product a few years ago [2, 3].

Martin Breugst: In my opinion, one of the most fascinating topics in physical-organic chemistry is probably the scientific discussion over the nonclassical nature of the 2-norbornyl cation. For decades, many renowned chemists worked on this question using a multitude of physical-organic techniques until it was once and for all answered by crystal structures by Schleyer, Meyer, Krossing, and colleagues in 2013 [4].

The European Journal of Organic Chemistry is currently celebrating its 20th birthday. What has been the most exciting development in the field of physical-organic chemistry in the past 20 years?

Martin Breugst: A very exciting field within physical-organic chemistry is the development of molecular switches and of molecular machines. These concepts combine different concepts of physical-organic chemistry in an ideal way and various practical applications can be expected in the future among others in delivery systems, therapeutics, self-healing materials, or adaptive catalysis.

Hans-Ulrich Reissig: The observation and characterization of intermediates with (very) short life-times by modern spectroscopic methods is certainly also a very important development.

How about the future – which hot topics do you foresee for the next 20 years?

Martin Breugst: According to Niels Bohr, a prediction is very difficult, especially about the future. I would expect that multidisciplinary approaches will gain more importance to address the big challenges related to energy, sustainability, materials, or medicine.

More specifically, improvements both in spectroscopic methods and computational techniques might allow a better understanding of short-lived intermediates in organic reactions. Many mechanisms of today are still based on experimental results from more than 50 years ago. Therefore, insights into the dynamics and intermediates could have a huge impact on our understanding of important organic transformations.

Hans-Ulrich Reissig: The planning of organic synthesis with computational assistance will play a much more prominent role. Also, new reactions will be discovered after predictions by theory. Hopefully, surprising and useful new transformations will still be found by accident and imagination.

How come all three of you are authors of the aforementioned article?

Rolf Huisgen: The idea for this paper stems from our discussion during the birthday symposium for Professor Dr. Herbert Mayr in August 2017. We realized that the regioselectivities of dipolar cycloadditions between diazoalkanes and alkynes observed during the doctoral work of Hans-Ulrich Reissig 40 years ago could not be explained properly. When consulting the literature, we learned that this is still an open question and decided to have a closer look at this problem.

You are three researchers from the same field but of three different generations. Has this an effect on your cooperation?

Martin Breugst: From my perspective, it has been very insightful to work together with Professor Reissig and Professor Huisgen. I hope that they would agree if I state that bringing together different experiences and being able to discuss intensively based on our shared as well as diverging viewpoints has been an amazing inspiration.

Hans-Ulrich Reissig: I have nothing to add to this statement. We are very happy that Dr. Breugst could help us to understand this longstanding problem of regioselectivities.

Do you envy one of your colleagues for the time they have started their research career?

Martin Breugst: Personally, I think that it always was and always will be difficult to start your independent career. Of course, the challenges 20 or 50 years ago differ from todays. Today, young scholars are probably more independent than ever before – which can be both a blessing and a curse.

Hans-Ulrich Reissig: Today, it is much more difficult to find a research field that is not already occupied. I was very lucky as a young researcher to find immediately a topic where I could show my originality [5]. Donor–acceptor cyclopropanes became a very useful class of compounds as proven by their recent renaissance.

Professor Huisgen, you are a very well-known chemist, received many awards, a reaction is named after you, many of your habilitants became successful professors. What is it you yourself are most proud of or very thankful for when you look back?

Rolf Huisgen: The development of the general concept of 1,3-dipolar cycloadditions was, of course, a major achievement of my group [6]. I am very thankful that I had such a high number of gifted co-workers in my group. To establish a tradition – not only in physical organic chemistry – is a very satisfying feeling when looking back.

Professor Reissig, you are Professor Emeritus since 2015. Does this mean you have more time for research now?

Hans-Ulrich Reissig: After my retirement in 2015, I deliberately decided not to continue with an active research group. I had observed that only a very few chemists have new ideas in this stage of their scientific life and therefore I wanted to transfer the resources required for experimental work – manpower, money, space, facilities – to the younger generation. As a consequence, I have sufficient time to write publications and to review manuscripts of colleagues.

Professor Breugst, you’ve started about five years ago as an independent researcher at the University of Cologne. What are your research plans for the future?

Martin Breugst: As a strong believer in the combination of experimental and computational techniques, my group applies both methods to study how different non-covalent interactions, e.g., halogen and pnicogen bonding or London dispersion, can be used in catalysis (see [7, 8] for examples). Thus, in the future, we want to continue on this promising trajectory and will tackle all kinds of reaction mechanisms of different organic transformations.

Martin Breugst, born 1980 in Munich, Germany, studied chemistry and biochemistry at the Ludwig-Maximilians-University, Munich, Germany. He earned his Ph.D. in 2010 under the supervision of Herbert Mayr working on ambident reactivity and kinetics. From 2011-2013, he moved to the University of California, Los Angeles, USA, as a Feodor-Lynen postdoctoral fellow where he worked with Ken Houk on different aspects of computational organic chemistry. Since 2013, Martin Breugst is an independent researcher at the University of Cologne, Germany. He completed his habilitation in 2017.

Hans-Ulrich Reissig, born 1949 in Helmbrechts, Germany, studied chemistry at the Ludwig-Maximilians University Munich, Germany, from 1970 to 1975. He earned his Ph.D. in 1978 under the supervision of Rolf Huisgen, with a thesis on the additions of diazoalkanes and the chemistry of 3H-pyrazoles. After a postdoctoral research stay with Edward Piers at the University of British Columbia, Vancouver, Canada, from 1978 to 1979, he started his independent research at the Julius-Maximilians-Universität Würzburg, Germany, in 1979, and finished his habilitation in 1984. As Heisenberg awardee and lecturer, he stayed in Würzburg until 1986. From 1986 to 1993, he was an associate professor at TH Darmstadt, Germany, and full professor at TU Dresden, Germany, from 1993 to 1999. Since 1999, he has been professor at FU Berlin till his retirement in 2015.

Rolf Huisgen, born 1920 in Gerolstein, Germany, studied chemistry at the University Bonn and the Ludwig-Maximilians University Munich, both Germany, under the supervision of Heinrich Otto Wieland. After completing his Ph.D. in 1943 and his habilitation in 1947, he became a professor at the University of Tübingen, Germany, in 1949. He returned to the University of Munich in 1952 where he remained dedicated to research long after attaining emeritus status in 1988.

Rolf Huisgen’s major achievements were the development of the 1,3-dipolar cycloaddition reaction, also known as the Huisgen cycloaddition or Huisgen reaction, and the mechanistic investigations of other important pericyclic reactions. 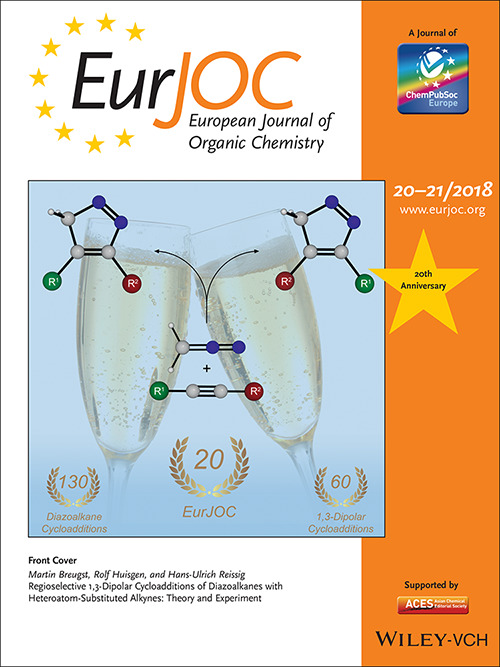