Hydrogen is an attractive energy source but it is currently generated using energy-intensive methods. Thus, there is a need for the development of catalysts to convert protons from water into H2, ideally using sunlight as the energy source.

Sally Brooker, University of Otago, Dunedin, New Zealand, Garry S. Hanan, University of Montreal, Canada, and colleagues have studied photocatalytic H2 production using 17 different cobalt(II)-based catalysts in both dimethylformamide (DMF) and water under blue light. All 17 cobalt complexes, with five types of ligand systems, are active HER catalysts in both DMF and aqueous solution. The best catalysts were a diphenylamine-based Schiff base macrocyclic cobalt(II) complex and a polydentate 1,2,4-triazole bridged dicobalt(II) complex (pictured below). Both feature numerous five-membered chelate rings, and show activities two to three times greater than the “literature standard”, cobaloxime, under the same conditions. 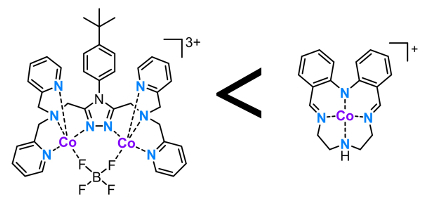 It was found that the use of shorter alkyl linkers between the N donors, and hence, smaller chelate ring sizes significantly enhance catalytic performance. However, peripheral functional groups were found to have little impact on the hydrogen evolution reaction (HER) activity. This is important as it opens up the use of these groups to introduce functionality, such as enabling attachment to surfaces or photosensitizers. On the other hand it shows that significant tuning of the catalyst activity by simple variations in ligand substituents is not a particularly promising avenue for further improving these catalysts.

According to the researchers, the wide range of new types of cobalt(II) molecular catalysts screened in this study could help to refine design principles for such catalysts.