The 2nd Swiss Industrial Chemistry Symposium (SICS’18)—organized by the Swiss Chemical Society (SCS) and held at the University of Basel, Switzerland, on October 19, 2018—brought together industrial chemists working in research and Ph.D. students and postdocs of Swiss universities. Over 260 delegates attended the symposium, about 70 % of them came from industry.

The meeting offered a unique platform for researchers from industry to present their work in 15 talks. 52 Ph.D. students and postdocs had the chance to present their work with a poster. In a relaxed and very positive atmosphere, the one-day event provided many opportunities for attendees to exchange with colleagues from diverse backgrounds or to look at the exhibition stands.

The feedback for the 1st Swiss Industrial Chemistry Symposium held in 2016 was extremely positive. The SCS, therefore, plans to introduce this symposium as an additional approach to connect industry and academia to be held alternating with their biannual SCS-Syngenta Meeting. 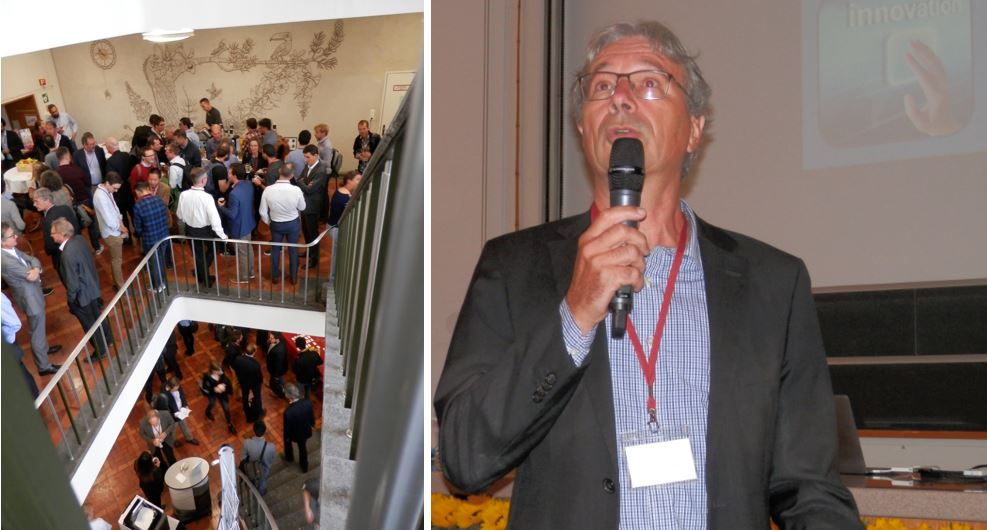 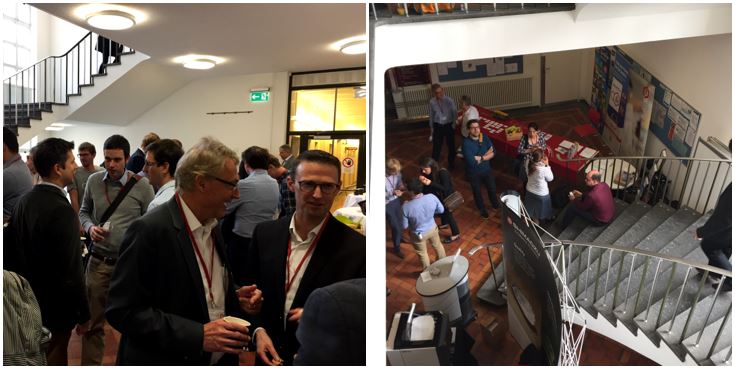 A big challenge for the pharmaceutical industry is the fight against the growing number of antibiotic-resistant bacteria. Since the 1960s, no antibiotics with new mechanisms have come to the market. Dr. Marc Thommen, Polyphor Ltd., Allschwil, and Dr. Stefan Eissler, Bachem AG, Bubendorf, reported in their tandem talk in the Morning Session on the new antibiotic murepavadin. Currently, it is in a phase III clinical trial.

Gram-negative bacteria account for approx. 50 % of the severe hospital-acquired infections. Pseudomonas aeruginosa is responsible for 10 % of all hospital-acquired infections and the second-leading cause of hospital-acquired pneumonia, with mortality rates of approximately 30–40 %. Its strain is resistant against the widely used antibiotic carbapenem. Therefore, the World Health Organization (WHO) has classified it as one of the top three critical pathogens. Murepavadin is potentially the first new class of antibiotics to be introduced against gram-negative bacteria in about 50 years [1]. 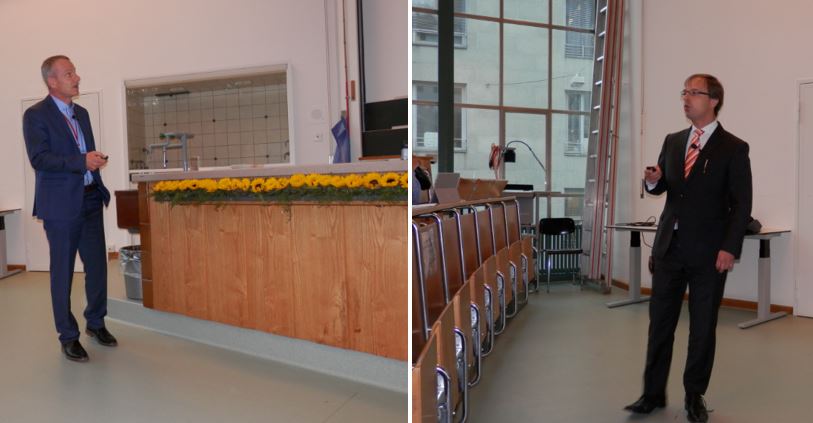 Daylight Management in Buildings
In the past, light management was mainly used to improve safety. Today, it is known that daylight improves the performance of office workers, promotes their well-being, and boosts physical and mental health. In addition, light management can reduce the energy costs of electric lighting in office buildings. Dr. Andreas Hafner, BASF Schweiz AG, Basel, gave examples of how materials science helps to manage illumination in buildings.

Daylight Redirection Foil (DARE) Light Tube (LUX) is a technology that redirects light and transports it via refractive micro-optic foils to bring daylight into building interiors so even windowless rooms do not need artificial light during the day. Facade elements capture the sunlight with refractive foils. Reflection on the inner tube walls concentrates and transports the light up to 12 m deep into the interior of a building where light fixtures shine the daylight into the rooms. The technology is currently tested at a test house run by EMPA (Swiss Federal Laboratories for Materials Science and Technology), Dübendorf.

Another technology produces sun-like artificial light: A polymeric color conversion film converts blue LED wavelengths to white light which is very similar to natural light. This allows the use of the cheapest LEDS to provide perfect light with a Color Rendering Index (CRI) over 95. The higher the CRI (max. = 100), the better the color rendering ability of a light source. Cheap LEDs typically have a CRI of 51; standard LEDs one of 80. 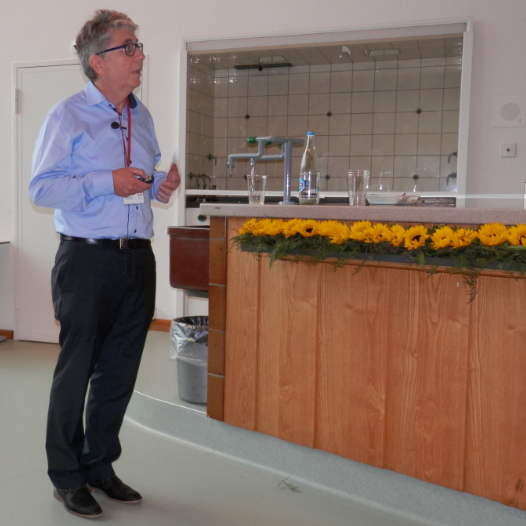 Does Catalysis Need a Future? Does the Future Need Catalysts?
Dr. Werner Bonrath, DSM Nutritional Products, Kaiseraugst, talked in the Afternoon Session about the future of catalysis in the fine chemicals industry. To answer this question properly, Bonrath recommends to first define what “the future” means (five years, a decade, 30 years, etc.), which region of the world we refer to, if university or industry is considered, and which field (polymers, pharma, fine-chemicals, life-science, materials science, etc.) is of interest. In addition, the environmental (E) factor is of importance—it denotes the ratio of the mass of waste per mass of product. Overall, it is very clear that we need better reactions that produce less waste.

Trends for the next years include in Werner Bonraths eyes the need for new catalytic processes with higher selectivity (enantioselectivity, diastereoselectivity) and space-time-yield, economical processes, driven by base-metal catalysts. The importance of bio-transformations will increase further just as the application of existing and new environmental friendly solvents in all type of processes. Sustainable starting materials need to bypass oil- and coal-based feedstock materials. Catalytic reactions need to be combined with purification which also requires a change of the reactor design; especially for continuous processing. Handling of “big data” including computer-assisted design of catalysts will gain increasing importance. Redox, especially photo-redox catalysis, will increase. This is coupled with the use of sustainable electricity for chemical conversions and the use of new materials such as electrodes consisting of base-metal containing materials.

Figure 4. During the talks and Dr. Werner Bonrath, DSM Nutritional Products, during his talk on the future of catalysis in the fine chemicals industry.

Attending Ph.D. students and postdocs had to present a poster during the symposium. During the lunch break, a jury selected the three best posters [2]. The winners–Johannes Diesel, EPFL Lausanne  (Nickel-Catalyzed Enantioselective Pyridone C–H Functionalizations Enabled by a Bulky N Heterocyclic Carbene Ligand), Alejandro Guarnieri Ibáñez, University of Geneva  (Diversity-Oriented Synthesis of Heterocycles and Macrocycles by Controlled Reactions of Oxetanes with α-Iminocarbenes), and Benson Jelier, ETH Zürich  (Radical Trifluoromethoxylation of Arenes Triggered by a Visible-Light-Mediated N–O Bond Redox Fragmentation)—had the chance to present their research in the Afternoon Session in five-minute talks. The SICS Best Poster award is endowed with a certificate and a cash cheque of CHF 100.

The symposium ended with farewell words from Dr. Alain De Mesmaeker, President of the SCS from Syngenta, Basel, and David Spichiger, Executive Director of SCS. Afterwards, the participants met for an aperitif and networking. The participants of the symposium were very enthusiastic about the lectures and discussions. “It is a must-be event for the Swiss chemical industry, at least around Basel”, one participant said. The SCS plans a 3rd Swiss Industrial Chemistry Symposium in Basel in 2020.