Palladium terminal imido or nitrene complexes are highly reactive compounds. They were commonly believed to be too reactive to be isolable. The reactivity results from their d8 electron configuration, which leads to the population of antibonding molecular orbitals.

Dominik Munz, University of Erlangen-Nürnberg, Germany, and colleagues have synthesized the first example of such a reactive intermediate (pictured above), using a cyclic (alkyl)(amino) carbene (CAAC) ligand as a support. The complex could be obtained either by the deprotonation of an amido complex or by the oxidation of a palladium(0) precursor with an organic azide (pictured below, Dipp = 2,6-diisopropylphenyl, Ts = SO2Tol, py = pyridine). 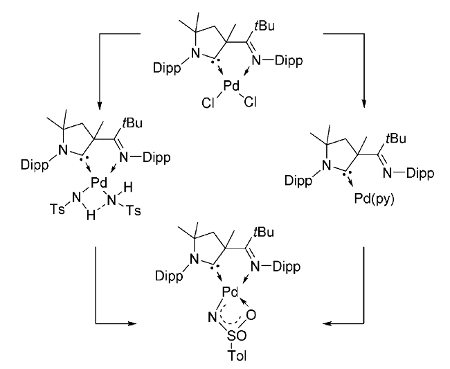 The synthesized complex activates, e.g., strong bonds and small molecules such as water, amines, dihydrogen, alkynes, and aromatic C–H bonds. Its catalytic activity was demonstrated in the reduction of azides by dihydrogen.

According to the researchers, their work provides evidence for the fact that palladium terminal imido complexes are intermediates in various catalytic processes. These insights suggest new approaches for the selective activation of strong C–H bonds.