Hydrogen therapy, i.e., treatment with H2, has potential for the treatment of diseases such as arthritis or vascular and cardiac metabolic diseases. As an antioxidant, hydrogen can selectively destroy harmful hydroxyl radicals without affecting other required reactive oxygen species (ROS). However, the poor solubility of hydrogen in water prevents its effective delivery to diseased tissue.

Xuanjun Zhang, University of Macau, China, Changfeng Wu, Southern University of Science and Technology, Shenzhen, China, and colleagues have developed an efficient self-assembly strategy to load semiconducting polymer nanoparticles (so-called polymer dots or Pdots) into liposomes. The liposomes can then act as nanoreactors for in situ photocatalytic hydrogen production in the aqueous environment of diseased tissues.

The liposomes confine the Pdot photocatalyst, reactants, intermediates, and any by‐products. The hydrogen molecules generated upon irradiation can diffuse across the lipid bilayer of the liposome into diseased tissues and scavenge hydroxyl radicals (pictured below). This technique may lead to applications of hydrogen therapy for reducing oxidative damage. 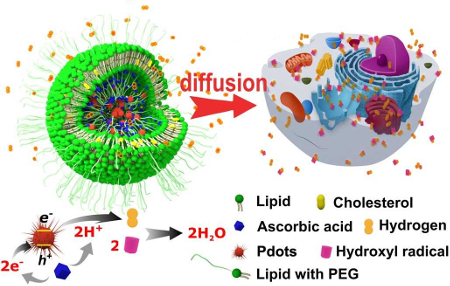