Drug synthesis in living organisms via chemical reactions that do not interfere with biochemical processes can be an effective method to address drug delivery problems. However, it is still not easy to carry out drug synthesis reactions at a specified location inside living cells.

Xiaogang Qu, Changchun Institute of Applied Chemistry, Chinese Academy of Sciences, and colleagues have designed a heterogeneous copper catalyst on a metal-organic framework (MOF) which accumulates in the mitochondria of living cells. A Zr-based MOF acts as a scaffold to stabilize and protect copper nanoparticles on its surface. Functionalization of the nanoparticles with triphenylphosphonium groups leads to the selective accumulation of the catalyst in mitochondria.

The resulting catalyst was used to perform a localized drug synthesis using a CuAAC “click” reaction between a terminal alkyne and an azide (pictured below in yellow and blue). The separate components of the drug are inactive. They are only activated at the desired location within the cell, where they encounter the catalyst.

The activity and stability of the developed catalyst were demonstrated by tumor therapy with a resveratrol analogue in a mouse model. These experiments also showed that the in situ generation of the active drug from inert prodrugs minimizes toxic side effects and maximizes drug efficacy. 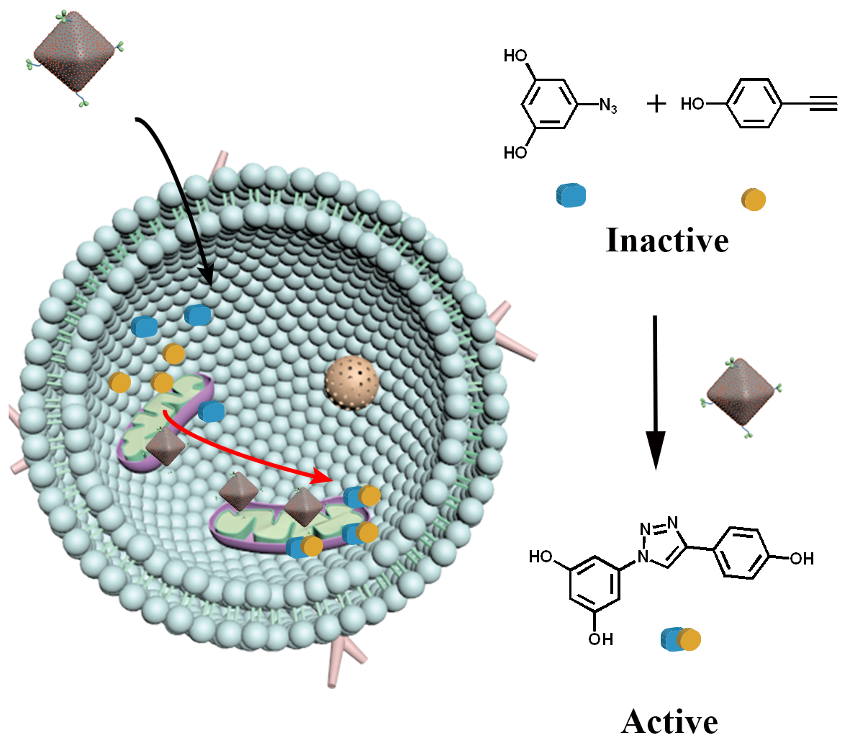