A wide variety of biological processes are controlled by chemical signals between cells. However, establishing communication between living cells and human-made nanodevices using chemical messages is challenging and not well explored.

Ramón Martínez-Máñez, Polytechnic University of Valencia, Spain, and colleagues have developed an interactive model of communication between a microorganism, Saccharomyces cerevisiae budding yeasts, and an abiotic nanodevice. The nanodevice is comprised of gold functionalized with glucose oxidase and mesoporous silica nanoparticles loaded with phleomycin—a DNA-damaging agent. The yeast strain used in the study expresses green fluorescent protein (GFP) when it is exposed to DNA‐damaging agents such as phleomycin.

In the presence of sucrose, a chemical message is transmitted from the yeast to the nanodevice, and a second message is generated and fed back to the yeast (pictured below). The yeast transforms sucrose into fructose and glucose. The glucose is converted into gluconic acid by the glucose oxidase on the nanodevice. The gluconic acid then promotes the release of phleomycin from the nanocarrier. This triggers the expression of GFP in the cytoplasm of the yeast, which finally produces a fluorescent signal. 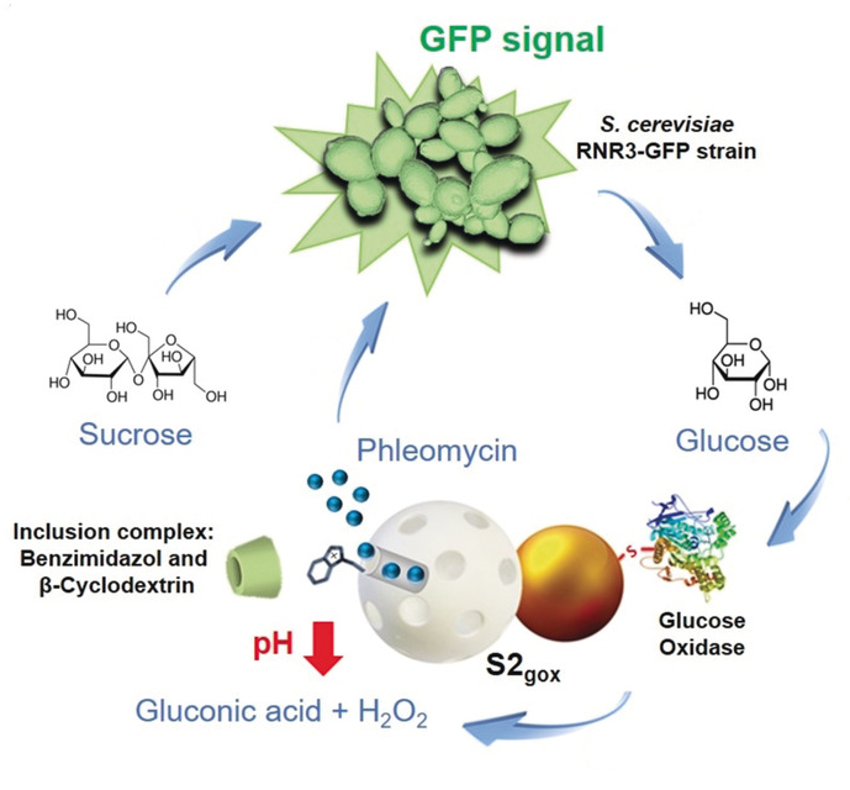 The researchers believe that this study is the first interactive model of communication between living microorganisms and abiotic nanodevices. They think that the idea of designing synthetic nanodevices which are capable of communicating with cells could have applications, e.g., in new strategies for diagnosis and personalized therapeutics or in sensors.