Rotaxanes are mechnically-interlocked molecules (MIMs) composed of a dumbbell-shaped compound that is threaded through a ring-shaped compound. The parts of such MIMs can move against each other, which can be used to create molecular machines. Controlling the movement of the ring in rotaxanes is important to build functioning molecular machines. Systems that can be controlled by electrochemical stimuli are interesting in this context.

Jan O. Jeppesen and colleagues, University of Southern Denmark, Odense, have synthesized a [2]rotaxane with four stable position for the ring along the dumbbell component (pictured below). The team used cyclobis(paraquat-p-phenylene (CBPQT4+) as the ring. In the dumbbell, the four potential stations for the ring to reside around are an oxyphenylene (OP, pictured in purple), a tetrathiafulvalene (TTF, pictured in light green), a mono-pyrrolo-TTF (MPTTF, pictured in dark green), and a hydroquinone (HQ, pictured in red). The team first synthesized the dumbbell part via alkylations at the TTF component. The CBPQT4+ ring was then formed around the dumbbell via the coupling of a p-xylylene dibromide and a dipyridinium dication component.

Spectroscopic data showed that the most common configuration of the rotaxane in solution is one where the ring sits at the MPTTF unit. However, when the rotaxane is electrochemically oxidized, the ring moves to an unstable position between the oxidized TTF2+ and MPTTF2+ units (pictured above). From there, the ring can follow two competing paths and end up either at the HQ unit or at the OP unit. The team found that the ring ended up at the HQ unit 70 % of the time, while moving to the OP unit only 30 % of the time. They attribute this effect to a lower activation energy for the ring moving over MPTTF2+ compared with moving over TTF2+. This insight could help with the design of rotaxanes in which the direction of the movement of a CBPQT4+ ring can be controlled. 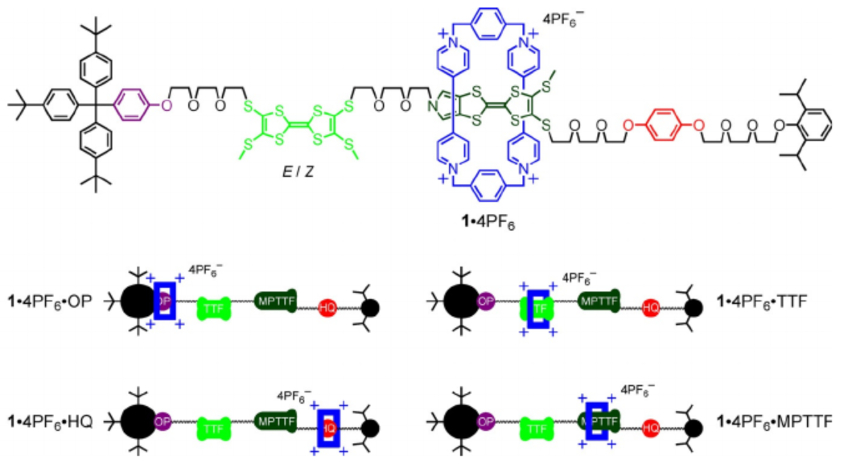