Replacing limited oil resources by relatively abundant reserves such as natural gas to produce fuels and chemical feedstocks would be useful to improve sustainability. The direct, nonoxidative conversion of methane to, e.g., ethylene is a challenging process due to unfavorable thermochemistry. Catalysts with single iron sites embedded in a silica matrix (Fe1©SiO2) can promote the selective conversion of methane to ethylene and aromatics. However, the catalytic mechanism has remained elusive and the initially proposed gas-phase reaction mechanism is still a subject of discussion..

Based on the energy profiles of different possible reaction pathways, the team found that the activation of methane can occur on the surface of the catalyst. In contrast to the gas-phase reaction mechanism proposed initially, the dissociated methyl prefers transferring to adjacent carbon site of the active center rather than desorbing into the gas phase, which leads to a quasi-Mars-van-Krevelen (quasi-MvK) surface reaction mechanism. Usually, in an MvK mechanism the lattice oxygen of a catalyst reacts with the substrate, and the reduced solid is reoxidized by gas‐phase oxygen. In this case, the quasi-MvK mechanism involves extracting and refilling surface C atoms coordinated to the Fe single-atom site, instead.

The proposed mechanism is pictured below: Methane is activated at the Fe1©SiC2 active center to generate methyl, which transfers from Fe to C at the active center and forms ethylene via a series of hydrogen-transfer steps. The surface carbon vacancy resulting from ethylene desorption is filled by another methane molecule, which dehydrogenates to regenerate the Fe1©SiC2 active center. In this mechanism, the Fe single-atom active center is key to CH4-to-C2H4 selective conversion. The study provides insights that might be useful for the rational design of efficient single-atom catalysts for large-scale nonoxidative methane conversion. 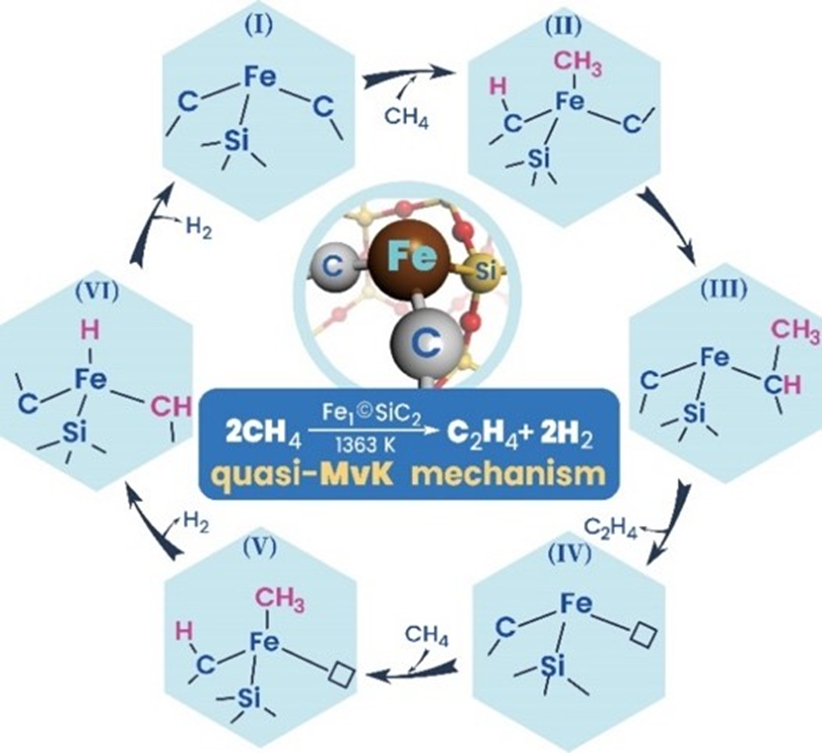