Faulty communication between proteins via protein–protein interactions (PPIs) is at the root of several diseases. For instance, an enhanced interaction of the transcription factor TEAD with the regulator protein YAP (Yes-associated protein) drives tumor growth. However, TEAD interacts via a large surface, which makes it challenging to disrupt the interaction with small, drug-like compounds. The picture above shows a TEAD–YAP complex (TEAD in gray, YAP in yellow, orange, green, and blue).

In search of inhibitors of the TEAD–YAP interaction, Andreas Brunschweiger, TU Dortmund University, Germany, and colleagues have designed a screening library in which all compounds were tagged with individual DNA barcodes (schematically pictured below). This allows the screening of many compounds for their affinity to drug targets in a single process. Promising candidates are then identified by their barcode. The library contains a large number of compounds, which are created via a combinatorial approach, i.e., using mixtures of reactants to give many variants.

The synthesis of the compounds in the library was initiated using starting materials bound to a chemically stable hexathymidine DNA on a solid phase. This approach is called a thymidine-initiated DNA-encoded library, or “tiDEL”. An Ugi four-component reaction was then used to convert the starting materials into a range of peptidomimetics. Another DNA-barcoding step and an expansion of the candidates using azide–alkyne cycloadditions gave a pool of over 8,000 molecules.

The team found a few molecules in this pool that bound to TEAD. These were identified by sequencing their DNA barcodes. The compounds were active in biophysical and cellular assays and inhibited the YAP–TEAD interaction (pictured at the bottom). The researchers believe that their library design could provide a starting point for the development of inhibitors of this cancer-relevant protein–protein interaction. 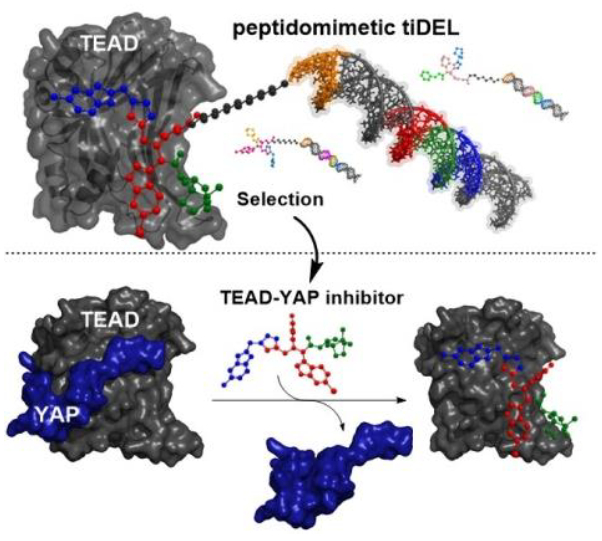