Systems based on the Fenton reaction are useful for water treatment. In this approach, hydrogen peroxide (H2O2) and iron-based catalysts are used to produce reactive oxygen species (ROS), which then react with organic contaminants and cause their degradation. Such systems are driven by the Fe(III)/Fe(II) redox cycle. However, the traditional Fenton reaction is hampered by the sluggish kinetics of Fe(III) reduction to Fe(II).

Shaobin Wang, Xiaoguang Duan, The University of Adelaide, Australia, and colleagues have developed a new Fenton-like system for green oxidation that uses elemental boron to accelerate the Fe(III)/Fe(II) conversion. The system consists of crystalline boron, Fe(III), and H2O2. B12 icosahedra in the crystalline boron sacrifice electrons to promote rapid Fe(III)/Fe(II) circulation (reactions pictured below). H2O2 is then decomposed by Fe(II) to produce hydroxyl radicals, which engage in secondary oxidation reactions with organic pollutants. 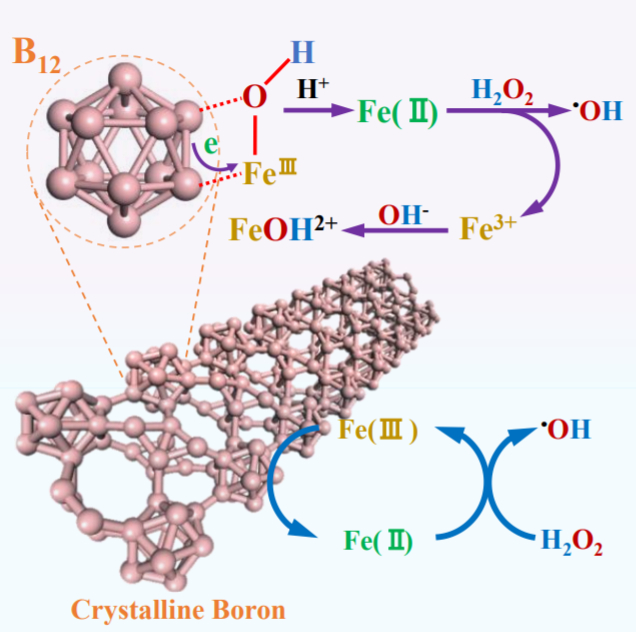 Compared to classical Fenton systems, the accumulation of Fe(III) and the precipitation of iron oxyhydroxides are avoided. The boron/Fe(III)/H2O2 system rapidly degrades a wide range of persistent organic pollutants without a decline in efficiency. The system also avoids the secondary pollution induced by conventional organic or metal-based reducing agents.