The RNA-world hypothesis claims that ribonucleic acid (RNA) is the macromolecular basis for early life on Earth—eventually evolving into deoxyribonucleic acid (DNA) and proteins. However, there also are researchers who posit that RNA and DNA arose simultaneously.

Ramanarayanan Krishnamurthy and colleagues, The Scripps Research Institute, La Jolla, CA, USA have discovered that diamidophosphate (DAP), an analogue of phosphate, phosphorylates deoxynucleosides in the presence of water to form the corresponding 5’-deoxynucleotides. Mixtures of deoxynucleosides react more efficiently than individual deoxynucleosides. The DAP-phosphorylation process enables a two stage-reaction in a single pot—phosphorylation followed by oligomerization—to form DNA (pictured below). Enzymatic digestion coupled with various analytical techniques showed that the DNA formed under these conditions has the same linkages as the natural system. 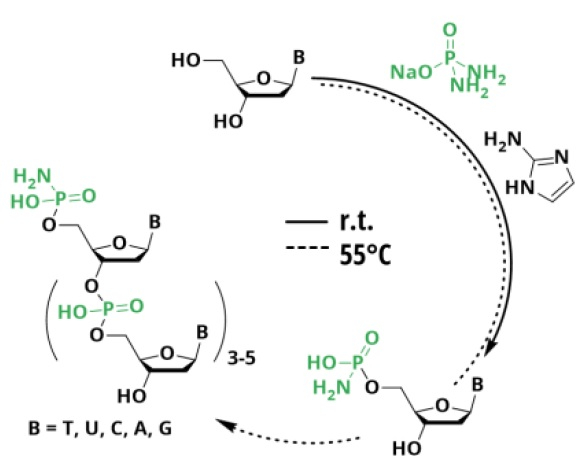 The team discovered that ribonucleosides can be phosphorylated under the same conditions and generate short RNA oligomers. The odds of abiotic formation of DNA and RNA are similar, suggesting that they could both form and exist concurrently. The researchers believe that the generation of RNA–DNA chimeras, or mixtures, can lead to the simultaneous emergence of RNA and DNA without terminating in an evolutionary dead end.