Covalent organic frameworks (COFs) are porous crystalline networks made from organic building blocks. Such porous materials can, for example, be used to encapsulate guest molecules and release them upon a certain stimulus. This stimulus can, e.g., be light—a manual gating mechanism. However, autonomous gating could be even more useful. Here, the stimulus is a concentration change of a “reporter chemical” close to the site where the guest molecules need to be released. One potential strategy towards autonomous gating is using a protein as the “gate” which undergoes a conformational change upon binding to the reporter chemical.

Takuzo Aida, University of Tokyo, Japan, and RIKEN Center for Emergent Matter Science, Wako, Japan, Kou Okuro, University of Tokyo and University of Hong Kong, China, and colleagues have developed a COF with hexagonally packed nanopores (pictured in blue) that contains multiple guanidinium groups. These functional groups can form salt bridges with biopolymers such as proteins, and thus, bind them to the COF. The team prepared the COF from an azide-substituted analogue via a copper‐catalyzed click reaction with propargyl guanidine.

Then they used this “bio-adhesive” COF together with a protein-based gate (pictured in grey). The “gate” gives the COF the ability to open its nanopores in the presence of a reporter chemical and release guest molecules (pictured in pink). Calmodulin, a protein known to change its conformation upon the selective binding of Ca2+, was chosen as the gating component, and sulforhodamine B was used as a model guest. 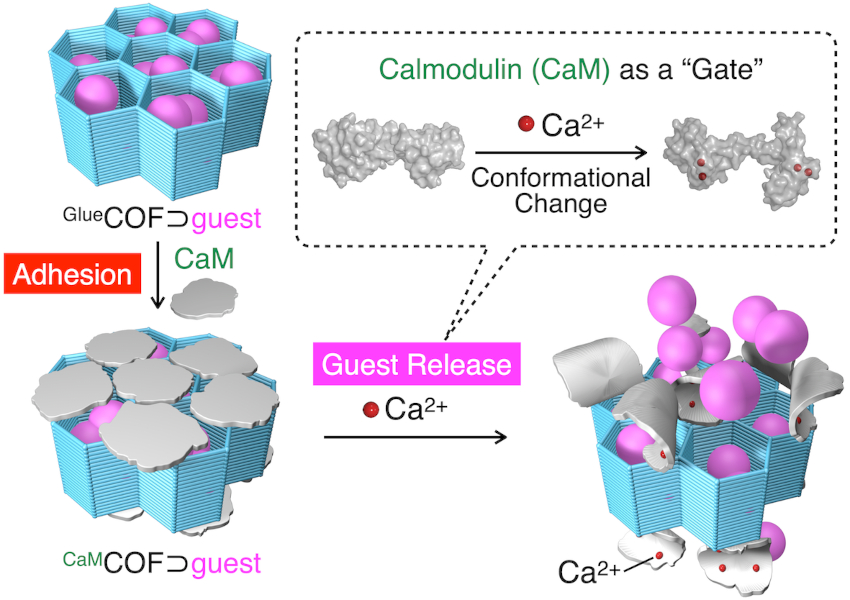 Guest molecules are released from the nanopores in response to an increased Ca2+ concentration. The researchers believe that this approach can be used, e.g., for chemotherapy of bone diseases with reduced side effects. In these diseases, the local concentration of Ca2+ at the diseased sites is high and the guest molecules can be released in a targeted manner.