Dr. Goar Sánchez-Sanz, Irish Centre for High-End Computing (ICHEC), Dublin, is an expert in computational chemistry focused on non-covalent interactions. Non-covalent bonds such as hydrogen bonds, ionic bonds, van der Waals interactions, or hydrophobic bonds stabilize complexes of different molecules and determine the shape of many large biological molecules. Although the individual bonds are quite weak, several of them between molecules or between parts of a molecule can stabilize the three-dimensional structures of, for example, proteins and mediate specific binding interactions.

Here Goar Sánchez-Sanz speaks to Dr. Kira Welter for ChemistryViews about his fascination to study non-covalent interactions and how he uses computational chemistry for this purpose.

Could you tell us briefly what characterizes non-covalent interactions and why they are important in chemistry, biology, and materials sciences?

Non-covalent interactions are contacts between molecules—or sometimes within the same molecule—in which electrons are not shared. In general, they can be described as electron-density donation from an electron-rich moiety to an electron-deficient one.

These types of weak interactions are responsible for the shape of proteins and the interplay between drugs and receptors, as well as the binding of DNA drugs. They also influence the adsorption of molecules on surfaces and play an important role in polymer shapes, catalysis, and other areas including the fascinating properties of water. They are present everywhere!

There are different types of non-covalent interactions. Can you describe them?

There are a wide variety of non-covalent interactions. The most popular and most studied one is the hydrogen bond, which involves an X–H group, where X is any atom with a large electronegativity, and an electron donor, usually oxygen or nitrogen. But there are many others like halogen bonds, where a chlorine, bromine, or iodine atom interacts with a Lewis base or pnicogen [chemical elements in group 15], and pnictogen bonds, which involve nitrogen, phosphorus, or arsenic species. Other types of non-covalent interactions include tetrel [elements from group 14], spodium [group 12], and regium [group 11] bonds but also π··π, anion···π, and dipole–dipole interactions. There is like a large zoo of interactions.

What are the main challenges associated with investigating these systems?

I guess there are many challenges. The first one is describing the system accurately. Since some of the interactions are very weak, finding the interaction energy and—more importantly—the strength of such interactions is quite challenging. Also, they are affected by several factors, such as electronic repulsions and side interactions, which makes it hard to isolate and analyze them. From an experimental point of view, the main challenge is to find those interactions and isolate them, and for that, computational approaches are always very useful and provide clues and directions, since they allow exploring a wide variety of scenarios with minimal costs and risks.

Which experimental and computational methods are normally used to study non-covalent interactions?

From the experimental point of view, spectroscopic methods are the most suitable for studying non-covalent interactions. For example, rotational spectroscopy can provide a very accurate description of the structure of small compounds bound by non-covalent interactions at low temperature and very low pressure. Since the pressure and temperature can be easily controlled in standard high-level ab initio and DFT calculations, these conditions—low pressure and low temperature—can be simulated well in computational studies

From the computational point of view, ab initio and DFT methods are the most appropriate to describe non-covalent interactions, in addition to energy-partition methods like symmetry-adapted perturbation theory (SAPT), interacting quantum atoms (IQA), and others. As a rule of thumb, the weaker the interaction, the more sophisticated the method needed to accurately describe it. Some of those methods require complex partitions or extensive computational integrations that are very prohibited in large systems, although they can provide a detailed description of how the interaction takes places; for example, if it is pure charge transfer, if dispersion forces are involved, and so on

From a computational chemist’s point of view, what do you think are the greatest advances achieved in the field of non-covalent interactions during the last years?

The development of new density functional methods has been crucial not only in the computational chemistry domain but also in the non-covalent one.

Also, new programs and tools like non-covalent interaction plots (NCIPlots), independent gradient model plots (IGMPlots), or electron density shift (EDS) maps have helped to characterize the interactions, providing real-space visualizations of the areas of overlap between atoms, analyses of the density within interacting regions, electron currents, and so on. These tools have brought a new way to discuss and present results to the scientific community, expanding our knowledge in the field.

You are currently working at the Irish Centre for High-End Computing (ICHEC). Could you tell us a bit more about what you do there and about your career before joining that institution?

When I finished my Ph.D. back in 2010, I did three postdocs in Spain, the Czech Republic, and Ireland, the last one with a Human Frontier Science Program fellowship at University College Dublin, Ireland. When that contract ended, there were not many possibilities at that school, so I decided to make a change in my career. I applied to ICHEC as a computational scientist and was later promoted to National Service Leader. It is a very demanding job but also allows me to keep on researching and being part of the scientific community.

What is your research group currently doing in this area?

Currently, I am a National Service Manager manager at ICHEC, with limited time devoted to pure research. Although having access to the facilities and being exposed to the scientific ecosystem in ICHEC is an advantage as I have a broader view of the scientific landscape and resources, that also means that, I do not have a group. But I am lucky to have incredible collaborators, such as Dr. Cristina Trujillo—a tireless and brilliant researcher—at Trinity College Dublin as well as Professor Ibon Alkorta—a living encyclopedia on non-covalent interactions—and Professor José Elguero—a true eminency in chemistry—at IQM-CSIC in Spain. I have spent the last ten years with them, diving into the non-covalent interactions’ universe.

Currently, we are working on regium bonds in small-coinage RR’ and RX metal clusters with R,R’ = Au, Ag, Cu and X = halogens, interacting with Lewis acids. Those clusters are models of much larger systems and can be used as catalysts (depending on the conditions) to assist organic reactions.

How will you follow up on recent discoveries related to regium bonds. What are your plans for future work on non-covalent interactions?

In the near future, we will continue analyzing the influence of metals and reactivity on non-covalent interactions. Some small compounds like AuCl3 (mild Lewis acids) can be used as catalysts for different organic reactions. We are currently studying how the presence of these types of compounds can influence the transition barriers of a variety of reaction paths to improve the reaction products.

I was in my last year in college and attended a module called “Chemistry of the Atmosphere and Astrochemistry”. I was fascinated by the reaction and variety of odd chemical species in the universe. Then, I did a final year research project with that lecture’s group on theoretical studies of charged carbon clusters. That was the start of the snowball, downhill in my computational chemistry career.

What do you enjoy most about your job and which things don’t you like at all?

I love solving problems and helping others. My job gives me the opportunity to support users at all levels, enabling their research and solving their issues, technical problems, and so on. This is probably the most rewarding part of my current position.

On the other plate of the scale, this is a very demanding job, which requires a huge amount of patience and skills. It is highly pressurized at times, particularly if there are any service interruptions on the national supercomputer or if many researchers need support simultaneously. We are currently supporting more than 600 users from 18 different institutions and a total of 430 projects from different domains; 1/3 of them in computational chemistry.

We have a good team, but we support the whole Higher Educational Institutions sector; no organization can have enough staff for those times. In general, I am very happy with my current role. It allows me to explore other projects and engage researchers, technical staff, and industry.

What is your favorite hobby? 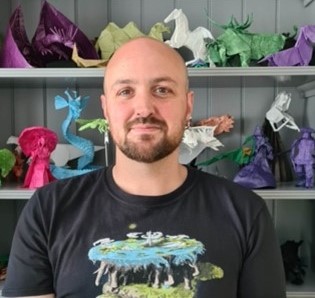 Well, I have a number of hobbies, but probably my favorite one is origami. I have been folding models since I was 19 and I love the complexity and mathematic background of origami. A funny thing is that I share this hobby with Professor Alkorta, who was doing origami fullerenes and molecules when I joined his group back in 2011.

Finally, what motivates you when things get difficult?

My wife, Cristina—yes, also my collaborator—is one of the main culprits keeping me on track when I feel unmotivated. Also, my three incredible sons, Victor, Unai, and Leo, who are always around supporting me—and most importantly—believing in me, as well as my colleagues and collaborators who are the bricks that support my scientific work.

Goar Sánchez obtained his Ph.D. in computational and theoretical chemistry from the Universidad Autónoma de Madrid, Spain, in 2010 for studies of the spectroscopy of lanthanides in ionic solids. After postdoc positions at the Institute of Medicinal Chemistry (IQM-CSIC), Madrid, Spain, the Institute of Organic Chemistry and Biochemistry (IOCHB), Prague, Czech Republic, and the University College Dublin, Ireland, he joined the Irish Centre for High-End Computing (ICHEC) in Dublin in 2016.

Currently, he is a Research Programme Manager responsible for the National Service and User Support teams, involved in national/international high-performance computing activities, and working with state-of-the-art computational facilities. He also has strong collaborations with the groups of Ibon Alkorta (IQM-CSIC) and Cristina Trujillo (Trinity College Dublin) in the non-covalent interactions field.