It is quite remarkable that the definite biography of one of the greatest physicists of the 20th century has not been written yet: We are talking about Max von Laue (1879–1960), Nobel Laureate in Physics in 1914 for the discovery of the X-ray diffraction, author of the first textbook on relativity theory (Volume 1 on the special theory appeared in 1911, volume 2 on the general Theory came out in 1921), and one of those who, though not politically active, was not lured by the singing of the sirens during the Nazi period, avoiding the pitfalls of opportunism that took many of his colleagues. The “resolute champion of freedom”, as he was called on his honorary doctor degree’s diploma from the University of Chicago (1949), was and remained a “real chap”, as Einstein so aptly described him.

We are now presented with a new biography of von Laue. First of all, it is important to thank the editors for bringing this book forth even after the passing of its author Jost Emmerich. Second, Emmerich’s efforts deserve the highest praise for meticulous research. It epitomizes years of extensive archival research on the life of von Laue. The amount of personal correspondence is astonishing and reveals attention to detail, all put together in a rather coherent fashion. It is a piece of work that should be honored for what it is, and no future biography of Max von Laue will make do without this one. 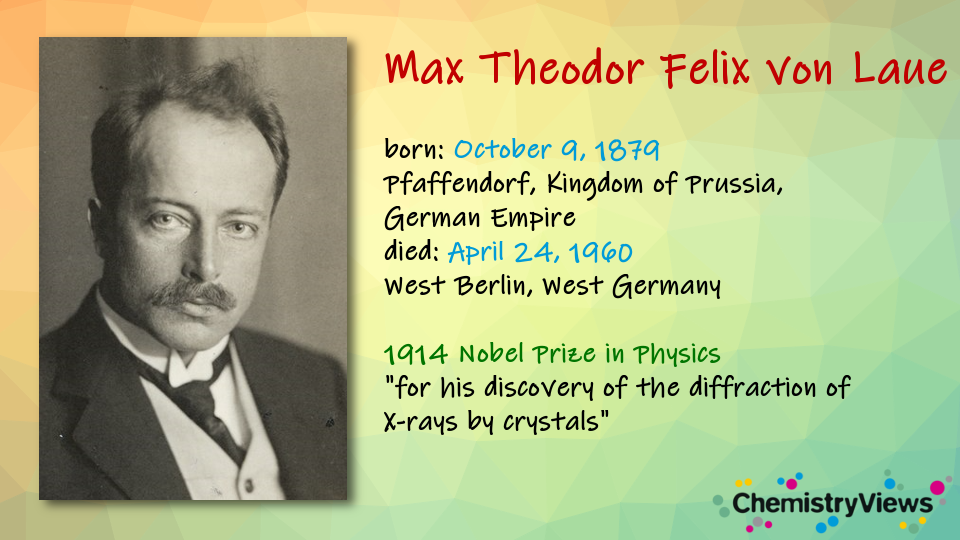 However, one has to point out that this is not a scientific biography in the sense of other biographies like Abraham Pais’s biography of Einstein, “Subtle is the Lord”. Copiously illustrated, it follows the main steps of von Laue’s scientific and public life in a chronological manner. This is done by interspersing biographical details of him with letters from colleagues he interacted with during his life and the agitated times he lived through: World War I, the ascension of Fascism, World War II, the effects of a devastated and divided Germany, and the reorganization of science in the country.

Max von Laue was born in Pfaffendorf near Koblenz, Germany, on October 9, 1879. He studied physics in Strasbourg, Göttingen, München, and Berlin, where he came under the spell of Max Planck and defended his Ph.D. Thesis in 1903. Dedicating only four pages to von Laue’s life pre-physics—little is said about his family background, the influences he received in early life, and the context of his upbringing—the book sets off in 1898 when von Laue went to Strasbourg to study physics.

Starting with the year 1930, the book follows von Laue’s persona year by year until his untimely death in 1960 as a consequence of a car accident. Particular emphasis is given to the years preceding the Second World War, the war years, and the time after that, mostly centered around the common denominator of Berlin. There follows an extensive list of notes at the end of the book, an index of names, and a bibliography. An epitaph for Jost Emmerich from Martin Stock is also included. The lack of a subject index says much about the character of this work.

A Wealth of Historical Details vs. the Big Picture

The author, a physicist by background, was famous—among other things—for the conceptualization and realization of many science expositions (a total of 28) in Germany and abroad, particularly those dedicated to science and its impact on society, some of which went beyond physics. His extensive experience with archival research, his experience in the industry, his knowledge about the laying out of an exposition and what visitors expect from one come to bear in this book.

This also is reflected in the way the book was written. It has the flair of an exposition catalog. This is not a negative aspect per se, but it can be a two-edged sword depending on what the reader expects from a biography: The constant interspersing of facts with correspondence hampers the reading in many passages, leaving some blanks in the text. The amount of people and facts packed into 592 pages of information, sometimes without a context, makes it difficult for the reader to see the big picture and why exactly some people are mentioned, some of which are not known to the general public. On the other hand, it is possible to get a detailed roadmap of the scientific interests of von Laue and how they evolved with time, with thermodynamics as the unifying thread of his science. Each of his scientific works is mentioned, mostly in the context of discussions with other colleagues and letters between them, but once again, one is left wanting to know more.

If one is interested in the life of von Laue in particular and of a scientist in general from his dealings with other colleagues, this biography is a great source of information. Nonetheless, one is left wondering how Max von Laue, the person, came to be Max von Laue, the physicist. Unfortunately, not enough attention is given to the physical contents of his works. To be fair, there are not too many scientific biographies in the strict sense of the word but books on the history of scientific theories, such as the excellent book on superconductivity by Per Dahl to give an example—a topic which was of the greatest interest of von Laue and to which he contributed a great deal. Once again, any future biography of von Laue and his contributions to Physics will necessarily have to go through J. Emmerich’s remarkable accomplishment. However, such a biography is still waiting to be written.