Mechanically interlocked molecules (MIMs) are held together by mechanical bonds, i.e., they consist of two or more components that are entangled in such a way that they cannot be separated without breaking a covalent bond. Typical molecular topologies and architectures that contain mechanical bonds are rotaxanes, catenanes, molecular knots, and molecular Borromean rings.

Eduardo Victor Peris, University Jaume I, Castellón, Spain, and colleagues have developed a new type of MIM based on the coupling of two so-called metallotweezers, which consist of a rigid tether linking two flat “arms”. These arms contain a gold atom bound to a tert-butyl-functionalized pyrene-imidazolylidene group (pictured). The metallotweezers were synthesized from the corresponding pyrene-imidazolylidene gold complex via a reaction with 1,12-diethylnyl-[7-(3,5-di-tert-butylphenyl)dibenzo[c,h]acridine] as the tether precursor. The dimer forms via self-aggregation. 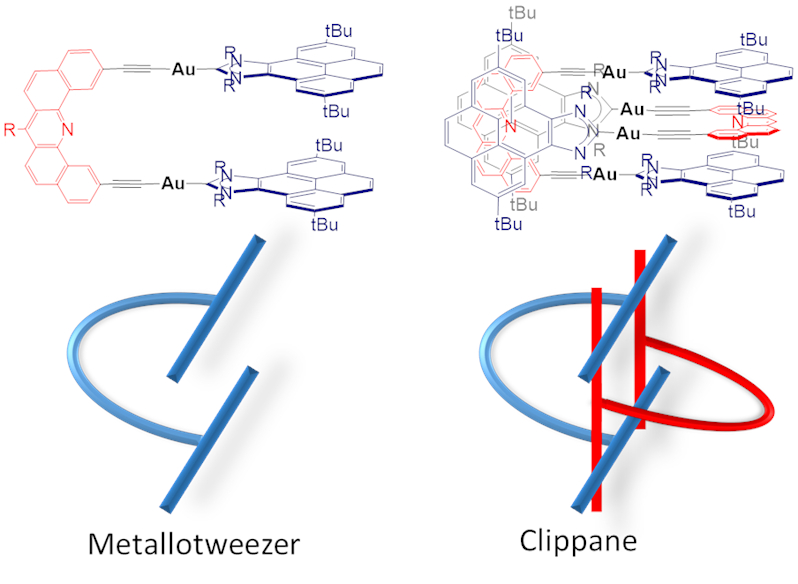 The interlocked structure is unique as it is produced by the self-aggregation of two U-shaped structures. The two components of the mechanically interlocked molecule cannot separate because the bulky tert-butyl groups prevent disassembly through slippage. For an analogous tweezer lacking these groups, the dimeric structure is in equilibrium with the monomeric structure. The researchers coined the name “clippane” to describe the new family of MIMs formed by two entangled or fastened molecular tweezers.