Proteins are large and complex biomolecules. Identifying whether a certain protein is present in a cell relies on catalysts that can selectively break proteins down into smaller fragments, which are then analyzed by mass spectrometry. Despite their important biological functions, the structural characterization of insoluble proteins remains a challenge. This is due to a lack of catalysts that remain active in the presence of surfactants. Surfactants are, however, needed to solubilize insoluble proteins.

Tatjana N. Parac-Vogt, KU Leuven, Belgium, and colleagues have used metal-oxo clusters as artificial enzyme-like catalysts for the hydrolysis of a wide range of different proteins. The group demonstrated that metal-substituted polyoxometalates (M-POMs) of the type [M(α-PW11O39)2]10– (M = Zr or Hf) can be used to promote the hydrolysis of zein, an insoluble protein, in the presence of sodium dodecyl sulfate (SDS), a surfactant (pictured below). 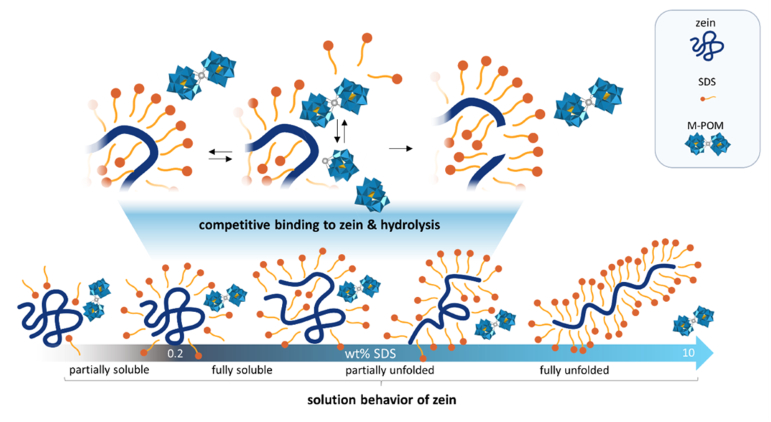 The team found that the hydrolytic ability of the M-POMs depends on the concentration of SDS due to competitive binding between the M-POM and SDS with the protein (pictured). The work establishes M-POMs as a viable alternative to commonly used natural enzymes, which largely lose their activity in the presence of surfactants.