Shape-shifter molecules are in never-ending motion. Their structure fluctuates because the carbon bonds that hold them together constantly break up and form again. Witold M. Bloch, Thomas Fallon, University of Adelaide, Australia, and colleagues have found a way to “tame” the shape-shifter molecule bullvalene. They report that integrating the molecule into a coordination cage enables its shape-shifting behavior to be restricted through molecular recognition. Such form capturing could play a role in responsive materials.

Chemical bonds between carbon atoms can be strong, as in the hydrocarbon gas ethane, or strained, as in triangular cyclopropane, or they can fluctuate between both kinds, such as in the organic hydrocarbon compound bullvalene.

This molecule, discovered around 1960, fascinates chemists because its structure is in constant motion. Its outer shape remains the same, but the bonds between the carbon atoms continually change. This prevents the molecule from performing reactions that lead to defined substances. What is a nightmare for some chemists, others see as an opportunity because bond fluctuation also means that the molecule can react very quickly to external stimuli. Chemists envision that fluctuating molecular systems could participate in functional molecular switches or other responsive systems. 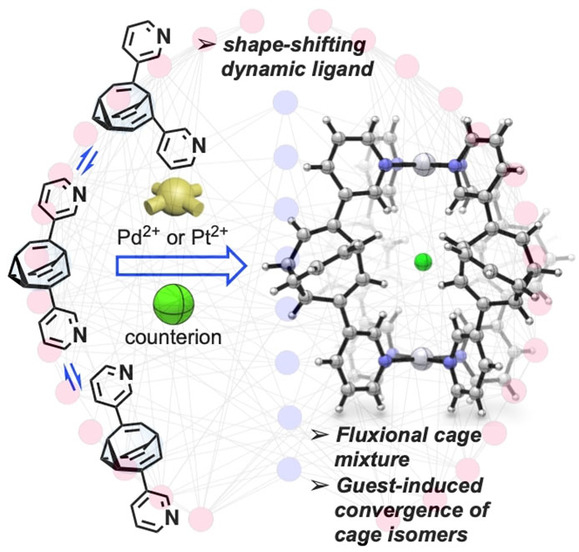 “The key to the restriction of bullvalene’s fluctional motion was the use of negative ions such as chloride or iodide,” Fallon explains. “When these ions were added into the cage mixture, a significant convergence from over 200,000 possible isomers to only one dominating cage form occurred.” As a driving force, the team identified molecular recognition, which is a term used to describe specific interactions between molecules and ions. This specific interaction led to the formation of a dominating cage isomer where four bullvalenes, held together on the top and bottom by metal ions, were arranged around the negative ion like curved struts of a basket (pictured).

Thus, cage formation brought the previously uncatchable bullvalene molecule to a certain degree of rest. The researchers found that only one conversion route between isomers remained, always leading to the dominating form. They anticipate that their bullvalene taming could help in the development of molecular systems where fast adaptation to external stimuli is required.