On the night of February 7 to 8, 1922, one of the most significant experiments in physics in the 20th century—that also has great relevance for chemistry—was conducted: The Stern–Gerlach experiment [1]. It showed that neutral silver atoms are deflected by a magnetic field, with half moving in one direction and half in the other.

With the experiment, Otto Stern and Walther Gerlach showed that the motion of electrons in atoms cannot be explained by the laws of classical physics. The experiment allowed the scientists to directly observe the separation between discrete quantum states.

Significance of the Experiment

The molecular beam method used by Stern and Gerlach in the experiment became one of the most important methods of investigation in physics, chemistry, and other sciences in the following decades. With it, individual atoms could be measured for the first time.

Besides the Nobel Prize awarded to Otto Stern, about 45 other Nobel Prizes in physics or chemistry were based on the findings of Stern and Gerlach. Among them are those for Isidor Rabi, Felix Bloch, Edward Mills Purcell, and Richard Ernst, who developed the nuclear magnetic resonance method, for Charles Townes, who built the first maser, which then gave rise to the laser, and for Norman Ramsey, William Daniel Phillips, and Theo Hänsch, who developed techniques for the atomic clock, which is the basis of all precision measurements in industry and navigation techniques (GPS) today [2]. Furthermore, the experiment is one of the experimental foundations of modern quantum physics and modern quantum technologies. technologies

In 1921, Otto Stern conceived the Stern-Gerlach experiment. At that time, he was an assistant to Max Born at the Institute for Theoretical Physics at the University of Frankfurt am Main, Germany.

In 1922, the experiment was carried out in the building of the Physikalischer Verein in Frankfurt am Main in the Robert-Mayer-Strasse in Frankfurt Bockenheim by Walther Gerlach and him. Gerlach was an Associate Professor at the Institute for Experimental Physics of the same university. Based on weather descriptions, the experiment was dated back to the night of February 7–8, 1922 [3]. 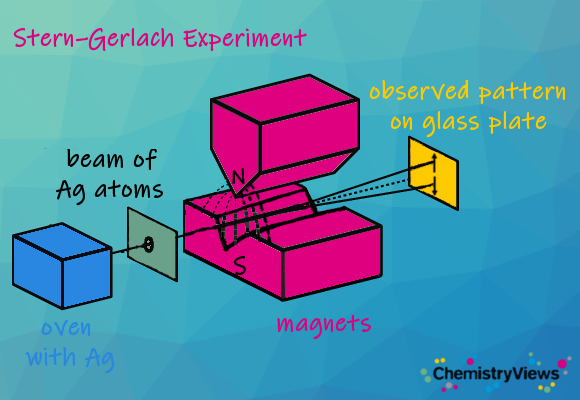 Otto Stern and Walther Gerlach used an oven to create a narrow beam of neutral silver atoms. The beam was then directed through a strong, inhomogeneous magnetic field, which exerts a force on magnetic moments (see Fig. 1). After the beam passed through the magnetic field, the silver atoms were deposited on a glass plate.

At a constant magnetic field strength, Stern and Gerlach observed two discrete spots of silver, i.e., the magnetic field had deflected half of the atoms in one direction and half in the other—splitting the Ag atom beam in two. These discrete points (instead of a continuous distribution) indicate quantization.
The high resolution of the apparatus allowed Stern and Gerlach to detect the magnetic moment of the silver atoms with high accuracy. They were able to measure the angle of deflection to within 1/100 of a degree.

Since a silver atom has a single unpaired electron, its magnetic moment is mostly determined by this one electron and its spin. The electron spin and its “spin up” or “spin down” character were unknown at the time. The experiment indicated the existence of such spin-1/2 particles and demonstrated that the spatial orientation of angular momentum is quantized.

Otto Stern then moved to Prague in today’s Czech Republic to work with Albert Einstein at Charles University and followed Einstein to the Swiss Federal Institute of Technology (ETH) Zurich in 1913, where Stern became private lecturer. In World War I, Stern was drafted and assigned to perform meteorological work at the Russian front. After the war, he moved to Frankfurt am Main, where he served as private lecturer and worked under Max Born. In 1921, Stern joined the University of Rostock in Germany— returning to Frankfurt during vacations to finish the Stern–Gerlach experiment. He remained there only until December 1922, and in 1923, Stern joined the University of Hamburg, Germany, as Full Professor of Physical Chemistry.

Due to his Jewish ancestry, Otto Stern was forced to resign his post in Hamburg in 1933. He emigrated to the United States and became a U.S. citizen in 1939. Until his retirement in 1945, Stern served as Professor of Physics at the Carnegie Institute of Technology, Pittsburgh, PA, USA. Otto Stern died on August 17, 1969.

Among many other honors, Otto Stern was awarded the 1943 Nobel Prize in Physics “for his contribution to the development of the molecular ray method and his discovery of the magnetic moment of the proton”.

On January 1, 1944, Gerlach officially became head of the Physics Department of the Reich Research Council (RFR; Reischsforschungsrat) and Plenipotentiary for Nuclear Physics. In April 1944, he founded the Reichsberichte für Physik, which appeared as a supplement to the Physikalische Zeitschrift. Beginning in May 1945, Gerlach was interned by British and American forces in France and Belgium as part of Operation Alsos. From July 1945 to January 1946, he was interned with other prominent German nuclear physicists, including Otto Hahn, Werner Heisenberg, Max von Laue, and Carl Friedrich von Weizsäcker, at Farm Hall, Cambridge, UK, as part of Operation Epsilon. Ten German scientists who were thought to have been involved in the development of nuclear weapons were imprisoned there.

Among many other honors, Walther Gerlach was awarded the Bavarian Order of Merit in 1959, the Pour le Mérite in 1962, the Order of Merit of the Federal Republic of Germany, Grand Cross of Merit with Star in 1970, and the Harnack Medal of the Max-Planck Society in 1974. Gerlach was active in numerous societies and committees, e.g., from 1949 to 1951, Gerlach was the founding president of the Fraunhofer-Gesellschaft, and from 1949 to 1961, he was vice president of the Deutsche Forschungs-Gemeinschaft (DFG).

Walther Gerlach was nominated for the Nobel Prize in Physics for the Stern-Gerlach experiment, along with Stern, in 1925 and eleven other years, but never received it. Possibly the Nobel Committee was concerned about compromising itself because of Gerlach’s involvement in the Reich Research Council (Reichsforschungsrat) and the Uranium Project. In 1957, Gerlach was one of the co-signers of the Göttingen Manifesto, which spoke out against the nuclear armament of the Federal Republic of Germany.

The 100th anniversary of the Stern-Gerlach experiment will be celebrated by the German Physical Society (DPG), the Frankfurt Physical Society, the Physics Department of Goethe University Frankfurt, and the German Chemical Society (GDCh) with a festive event lasting about 90 minutes in Frankfurt’s St Paul’s Church (German: Paulskirche). This Protestant church is known as the seat of the Frankfurt Parliament of 1848, the first publicly and freely-elected German legislative body.