Human concern for the environment has a long history. Concern about the impact of problems such as air- and water pollution on human life dates back at least to Roman times. In early 19th century Europe, interest in the environment was a feature of the Romantic movement. In China, India, and Peru, land conservation was practiced as early as 2,000 years ago. In general, however, such concerns did not lead to public activism.

Alexander von Humbold (1769 – 1859), in the early 19th century, first conceived of the world as a living organism, recognizing the damage humans do through clearing or artificial irrigation and that interventions in one place can lead to disaster elsewhere. “It may be that at some point we will travel to distant planets and take our mixture of arrogance, greed, and violence with us. We will desert these planets as we are already deserting our earth.” [1]

From these early efforts to protect natural resources to the first protests and global activities, environmental activism has developed at different times, for different reasons, and in different forms. Let’s look at a few highlights.

The book Silent Spring is often referred to as the starting point of the global environmental movement and one of the most influential books of the 20th century [2]. In this book, published in 1962, American biologist Rachel Carson (1907 – 1964; pictured in Fig. 1) describes the decline of bird populations as a result of excessive and indiscriminate use of insecticides and humanity’s attempt to control nature using synthetic substances.

At the time, DDT (dichlorodiphenyltrichloroethanes) was celebrated. It was first synthesized in 1874 by the Austrian chemist Othmar Zeidler. In 1939, the chemist Paul Müller (1899 – 1965) from J. R. Geigy AG in Basel, Switzerland, was the first to recognize that it is an extremely potent insecticide. DDT soon was marketed under the name Gesarol in the agricultural and livestock industries, and as the household insecticide Neozid. In 1948, Paul Müller was awarded the Nobel Prize in Physiology and Medicine “for his discovery of the high efficacy of DDT as a contact poison against various arthropods” [3].

Rachel Carson writes [2]: “It was a spring without voices. On the mornings that had once throbbed with the dawn chorus of robins, catbirds, doves, jays, wrens, and scores of other bird voices there was now no sound; only silence lay over the fields and woods and marsh …. No witchcraft, no enemy action had silenced the rebirth of new life in this stricken world. The people had done it themselves.”

“It is not my contention that chemical insecticides must never be used. I do contend that we have allowed poisonous and biologically potent chemicals to fall indiscriminately into the hands of persons largely or wholly ignorant of their potentials for harm.” 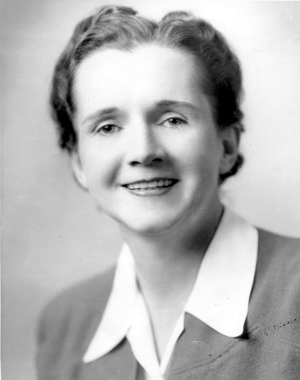 The book sparked a fierce political debate, particularly in the United States. Within a few years, DDT became a symbol of human’s destruction of nature. In 1972, its production and use were banned in most industrialized countries. The book also gave rise to an environmental movement and the founding of the U.S. Environmental Protection Agency.

In March 1972, the Club of Rome published its first report, The Limits to Growth, which was a big success [4,5]. 30 million copies were sold in more than 30 languages. In some 200 pages, computer simulations were used to prove that economic growth cannot continue indefinitely due to resource depletion. The report created large media attention, controversy, and impetus for the global sustainability movement.

In April 1968, Italian industrial executive Aurelio Peccei (1908 – 1984), then a Board Member of Fiat and Olivetti and President of the consulting firm Italconsult, and the British chemist Alexander King (1909 – 2007), Director of science, technology and education at the Paris-based Organization for Economic Cooperation and Development (OECD), had invited a small international circle of scientists, philanthropists, OECD and UNESCO staff to Rome, Italy.

Aurelio Peccei saw the “inescapable and irreducible interrelationship between humanity and the biosphere” in deep crisis. A “Copernican turn” was needed, in his opinion. Regular rounds of talks were arranged to better understand the problem. Out of this came the Club of Rome and five interrelated major trends leading to humanity’s problems were identified: accelerating industrialization, rapid population growth, widespread malnutrition, depletion of non-renewable resources, and increasing pollution.

The Club of Rome is committed to a livable and sustainable future for humanity. It regularly publishes so-called “Reports to the Club of Rome”. Today it includes 35 National Associations, and more than 40 “Reports to the Club of Rome” have been published, dealing with various topics, mainly from the point of view of future development. The reports are written by external experts or members of the Club, submitted for review, and accepted or rejected as reports. They are not written or issued by the Club as an organization. The organization includes around 100 active full members with a full-time secretariat in Winterthur, Switzerland, and a satellite office in Brussels, Belgium.

In 1974, its second report, Mankind at the Turning Point, was published. In addition to improved data, it contained a more optimistic forecast for the future. It said that as many of the factors involved are under human control, the environmental and economic disasters are avoidable or preventable.

The members of the Club of Rome remain committed to paying greater attention to important future issues around the world. Currently, they are focusing on three issues: Changing our economic systems, decoupling prosperity and resource consumption, as well as securing livelihoods, jobs, and incomes [6].

The first Earth Day was held on April 22, 1970. The 1969 Santa Barbara oil spill in the Santa Barbara Channel, CA, USA, where uncontrolled oil leaked from a well, inspired former Wisconsin Senator Gaylord Nelson (1916 – 2005) to create this day of environmental education and awareness [7].

Inspired by the student anti-war movement and with the help of Denis Hayes (*1944), a then young activist, they promoted events across the United States. More than 20 million people – at the time, 10 % of the total population of the United States – poured out on the streets, and the first Earth Day remains the largest single-day protest in human history. In 1990, Denis Hayes took it international and organized events in 141 nations.

In 1971, Greenpeace was founded by peace activists in Vancouver, Canada – an organization that everyone knows today. Initial campaigns were directed against nuclear weapons testing and whaling. Later, issues such as overfishing, global warming, the destruction of virgin forests, nuclear energy, and genetic engineering were added. According to their own statement, they “use direct nonviolent action to fight for the protection of the natural foundations of human and natural life and justice for all living things.” [8]

At the event British ecologist Barbara Ward (1914 – 1981) coined the phrase “Only one earth” [9] and French microbiologist René Dubois (1901 – 1982) probably coined “Think globally, act locally.” Indian Prime Minister Indira Gandhi (1917 – 1984) identified the “all-consuming concern for the self and the now” as the main cause of the ecological crisis and called for modern people to learn again “that you can only take from the earth and the atmosphere as much as you give back to it.” In her speech, she also pointed out that poverty in developing countries is a dangerous form of pollution that must be eliminated by helping those in need without further damaging the environment.

The Kyoto Protocol was adopted in 1997 and sets specific targets and deadlines for reducing global greenhouse gas emissions. Due to a complex ratification process, it entered into force in 2005. In 2020, there were 192 parties, including the European Union and all UN Member States except Andorra, Canada, South Sudan, and the United States.

In December 2015, for the first time, 196 countries and the EU agreed to a treaty binding under international law to curb climate change and cushion its effects [11]. This Paris Agreement. It is intended to ensure that global warming is limited to well below 2 °C compared to pre-industrial times; the states even want to try to limit warming to 1.5 °C. It replaced the Kyoto Protocol in 2021, as this international treaty expired in 2020. As of November 2021, 193 parties (192 countries and the EU) have ratified the Paris Agreement [12]. Iran, Eritrea, Libya, and Yemen have not ratified the agreement.

And Where Are We 50 Years Later?

Despite everyone knowing better, we are moving further and further away from the goals of sustainability. The necessity of further action is also evident in the recent activities of Greta Thunberg, Fridays for Future, and many other movements. 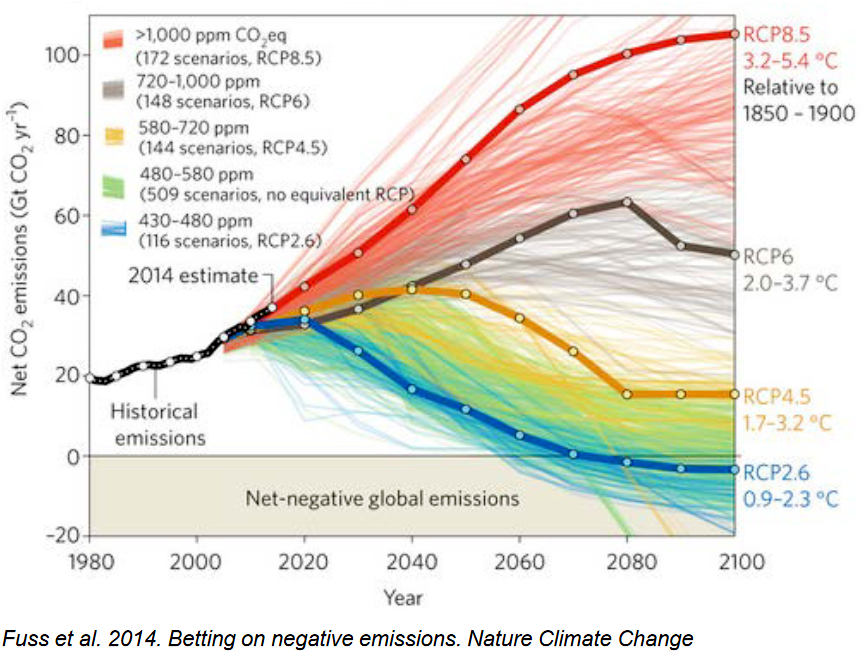 Figure 2. Current emissions follow the RCP 8.5 scenario with a probable ΔT of 3.2 to 5.4 °C.
Representative Concentration Pathway (RCP) – The pathways describe different climate futures, all of which are considered possible depending on the volume of greenhouse gases (GHG) emitted in the years to come.

Everyone is talking about sustainability today. But how often is there no real conviction and revolution for life behind it, but only empty marketing, empty promises, zeitgeist? We all know that we are running out of time. According to author Jonathan Safran Foer, it makes no difference if someone doesn’t believe in the science of global warming or if they accept the science but does not change their lives accordingly [15].

Hopefully, we will again let the fire fuel us, that set so much in motion 50 years ago, and work together to create good living conditions for our species within the boundaries of this planet. As the German Climate Consortium puts it: it’s real – it’s us – it’s bad – experts agree – there is hope [16]. We can still do something.