Borepin compounds, i.e., organoboranes with seven-membered ring structures containing a boron atom, are typically Lewis acidic with a sextet of electrons surrounding the boron center. While neutral borepins are well known, electron-rich organoboranes that have been chemically reduced are often highly reactive and challenging to isolate.

The borepin radicals and anions were synthesized from dibenzoborepin derivatives. To prepare stable borepin radicals, the team simultaneously added the CAAC 2,6-(diisopropylphenyl)-4,4-diethyl-2,2-dimethyl-pyrrolidin-5-ylidene and the strong reducing agent potassium graphite to the starting material. The corresponding borepin anion was then prepared by the addition of potassium graphite to the isolated radical. 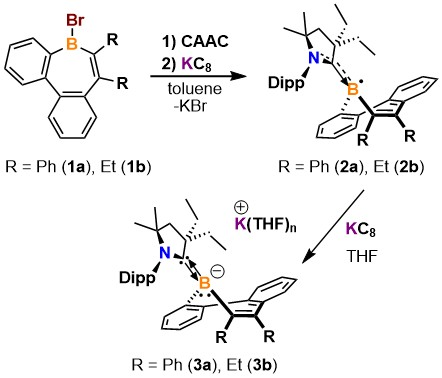 The researchers believe that the redox behavior of borepins could be important for the design and function of next-generation materials. In addition, electron-rich borepins are potential building blocks for boracyclic materials that would otherwise be inaccessible.