Professor Sir William Wakeham, former vice chancellor of Southhampton University, UK, is the new president of the Institution of Chemical Engineers (IChemE). Sir William talks to Brandi Schuster for the ChemViews magazine about his new position, IChemE, and the very flexible field of chemical engineering.

The Institution of Chemical Engineers (IChemE) is the global professional membership organisation for people who have an interest in and relevant experience in chemical engineering. It is also licensed to award the titles of Chartered Engineer (CEng), Chartered Scientist (CSi) and Chartered Environmentalist (CEnv) to suitably qualified members.

Founded in 1922 as a professional institution for chemical and process engineers, IChemE has grown to its current status of more than 33,000 members across 120 countries. IChemE currently has offices in Australia, China, Malaysia, New Zealand and the UK.

What are your goals for presidency?

The chemical engineer or process engineer is now finding employment in many diverse areas. The profession has become very flexible. The most important goal for me is to keep up with how the profession is developing.

We must be flexible too: On the one hand, in the sorts of people we will admit into the institution and, on the other hand, we need to listen to our membership to find out how the industry and the profession are changing. This involves being much closer to our 33,000 members than probably we are at the moment. And it means to find ways to listen to them – new ways of listening, not least by me traveling around the world and talking, but rather more effective ways to reach 33,000 people. That’s not an easy task.

Do you already have specific ideas on how to do so?

Yes, we try to use some social media like Twitter, Linked In and facebook to see whether we can develop ways of allowing our members to interact with us. We also have online member forums and we’re increasingly starting to stage webinars and online meetings to support our physical ones. It’s important that our members get access to a similar range of resources regardless of whether they’re in Manchester, Munich or Montreal!

I think it is broadening and chemical engineering is probably getting replaced by process engineering. Today chemical engineers are working in many process applications that are outside the chemical industry, e.g., the pharmaceutical business or the water industry. And it is getting more interdisciplinary, as the chemical, petrochemical and pharmaceutical industry are global industries who look for talents throughout the entire world.

How important is interdisciplinary?

My entire life has been filled around exactly this, as I am physicist by initial training. I think it is absolutely vital. We all need to bring things together to solve the problems the world is facing, whether it is energy or medicine or pharmaceuticals or water.

How do you respond to the trend that main chemical engineering activities are shifting from Europe to AsiaPacific?

Well, we have responded already. We are a global organization, so from our organizational point of view we are already placed to help those industries that are now operating in the east. We want to help them to develop and to develop the profession there. We already offer technical training courses in Malaysia, Singapore and China. We also accredit university courses all over the world. That accreditation is sought by universities to benchmark the quality of the education being offered  there and it’s something looked at very closely by the next generation of chemical engineers when choosing where to study. So I think I can’t claim to be ahead of the trend, but we are up with it.

My personal career has been mainly in research and at universities, so the challenge of working with extremely talented people to develop new ideas and new solutions for big problems has been fantastic.

What advice would you give students thinking of embarking on a chemical engineering career?

Hurry up and do it! – Because you will enter a profession that I think will have more influence on the evolution of the world than it even had in the past.

You were knighted. Can you tell a little bit about that? How is the process?

I was knighted for services to chemical engineering and higher education. So it always has to be for something.
It is a secret process wherein organizations within and far outside of government are invited to nominate people. A committee run by the government but with its output not determined by the government makes the final decision and makes recommendations to The Queen who endorses them – or not, I suppose.

And then you get to the palace and she hit you on the your shoulder with a sword.

And then you can call yourself Sir?

And then you can call yourself Sir. And the interesting thing is that there is nobody – even within the UK – who knows how one should address such a person.

I wasn’t sure either. I guess Sir Bill is not correct?

Well, my wife objected to that.

Bill is obviously a short form of William. Sir Bill sounds terrible. Formally people are supposed to address me as Sir William. In any sense of oral conversation it doesn’t make sense to use such a title. So Bill works generally. – I respond to both, of course.

Thank you for the interview. 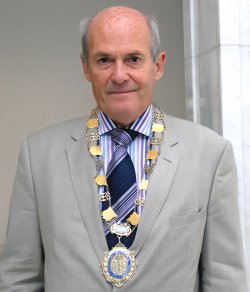 Professor Sir William Wakeham studied physics at Exeter University, UK. After a postdoctoral period in USA at Brown University, he took up a lectureship in the Chemical Engineering Department at Imperial College London and became Head of Department in 1988.

By 1999 he was Pro-Rector (Research), Deputy Rector and Pro-Rector (Resources) at Imperial College. He oversaw the College’s merger with a series of medical schools and stimulated its entrepreneurial activities. In September 2009, Sir William retired as Vice-Chancellor of the University of Southampton after 8 years in that position.

He was knighted in the Queen’s Birthday Honours 2009 for services to Chemical Engineering and Higher Education.