Professor Michael Röper is the Vice President of R&D Cooperations at BASF, Ludwigshafen, Germany, and is on the Editorial Advisory Board of the Ullmann’s Encyclopedia of Industrial Chemistry. He talks to ChemViews about his involvement with Ullmann’s throughout the years and how chemical engineering is evolving.

You are a member of the Editorial Advisory Board of the Ullmann’s Encyclopedia of Industrial Chemistry?

Can you tell us a bit about this position?

The role of the Editorial Advisory Board is to support the Editor in keeping the content of the Ullmann’s up-to-date and to further optimize its structure. It is also our role to identify authors who have the experience to contribute to the technical content in a concise and professional manner. Areas where I’m involved are industrial organic chemistry and catalysis, i.e., the conversion of feedstocks into basic chemicals, intermediates, and fine chemicals as well as other products of the chemical industry.


How long have you served on the board?

Now the Ullmann’s has been published in its 7th Edition: 3,000 authors from over 30 countries have contributed to 1,050 articles. The whole edition weights 60 kg.

As a Board Member, do you think of the Ullmann’s as your book?

I’m proud to be a part of this effort and I strongly believe that this edition is a first class knowledge base in the field of Industrial Chemistry.

Do you personally prefer the print or the online edition?

This depends on what kind of information I’m looking for: If the topic is very specific, I prefer the online edition because of its search functions, which are very convenient. To get an overview of a broader topic, I find the print version is more convenient.

Do you remember when and where you first came in contact with the Ullmann’s?

The very first time I had to carry out a full literature search in industrial chemistry was during my diploma thesis in chemistry in 1975. Luckily enough, our institute’s library at the Technical University of Aachen, Germany, had the most up-to-date edition of the Ullmann’s at the time.

As I’m an industrial chemist myself, I can comment on this only from an observer’s view. My impression is that, more and more, team efforts are required and that the field is evolving into a very interdisciplinary one.

Which fields do you think will be most important in the future?

With respect to energy and feedstocks, catalysis is the key to even more efficient chemical processes. Catalysis holds much promise for sustainable chemistry.

You are in the Department of Science Relations and Innovation Management at BASF. Can you please tell us a bit how your career has developed?

After completing my habilitation at the Technical University of Aachen in the field of Industrial Chemistry, I received an offer to join BASF’s prestigious Chemicals Research & Technology Division, then still called “Ammonia Laboratory”. After carrying out projects as a laboratory leader in the field of homogeneous catalysis for two years, I became a deputy production plant manager in the field of oxo alcohol synthesis. At that time, this position also included process improvement activities.

After my return to the Chemicals Research & Technology division, I became a group leader and later a research director in the field of product and process development of homogeneously catalyzed reactions. Emphasis was on syngas and olefin reactions.

When I joined the department of Science Relations and Innovation Management at BASF four years ago, this broad experience during my R&D activities proved extremely valuable. We closely collaborate with public funding agencies on the national and European level to develop research initiatives in areas like raw material change, renewable energies and energy efficiency. Joining forces with external partners along the value chain as well as with academia has proven to be extremely rewarding in these areas, which often require complementary skills.

Working at the interface of science and application is most rewarding and this is where innovations are created. Real progress is the result of the hard work of interdisciplinary teams, which combine expertise from science and engineering as well as from young researchers and experienced experts.

Also, I very much enjoy passing this experience on to students at the University of Heidelberg, Germany, where I teach a course in Industrial Organic Chemistry.

Do you have any other book projects planned?

I was asked to take care of the next edition of Hans-Jürgen Arpe’s book “Industrial Organic Chemistry” which is quite a challenge, given the authority of this book.


This would be a topic for another interview. It’s been a pleasure talking to you, thank you very much. 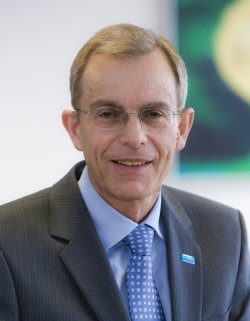 Professor Michael Röper is the Vice President R&D Cooperations, BASF SE, Ludwigshafen, Germany. He earned his Ph.D. and habilitation in chemistry at the Technical University of Aachen, Germany. In 1985, he joined the R&D division of BASF SE, chemicals research & technology where he developed products and processes with emphasis on homogeneous catalysis.

Since 2007, he has been responsible for BASF’s university cooperation program, especially in the field of publicly funded projects. As part of his work, he has developed thematic imput into national funding programs as well as into the 7th framework program (FP7) of the EU. He has also participated in the European Technology Platform (ETP) SusChem and in this context has contributed to the development of FP8. He also teaches the course Industrial Organic Chemistry at the University of Heidelberg, Germany.