The Chemiedozententagung was held at Albert Ludwigs University, Freiburg, Germany, on March 5–6, 2012. The event is held annually as a gathering of chemistry professors with the aim of giving up-and-coming professors a chance to present their work to more senior members in the field. Traditionally the meeting has been used by younger and senior researchers with the view of acquiring or filling available positions within the German university system, respectively. It is organized by the Arbeitsgemeinschaft Deutscher Universitätsprofessoren für Chemie (ADUC, Association of German University Professors of Chemistry) of the Gesellschaft Deutscher Chemiker (GDCh, German Chemical Society).

ChemViews magazine brings you these impressions from the conference and its award ceremony.

On the second and final day of the conference, ChemViews‘ Editor-in-Chief was surprised with a party at the Wiley-VCH booth to celebrate her award. 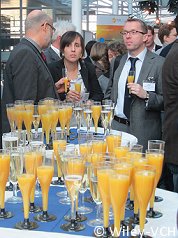 Dr. Eva Wille (above, right and below, left), Vice President and Executive Director, Wiley-VCH, and Dr. Peter Gölitz (above, left and below, right), Editor-in-Chief, Angewadte Chemie, were joined by friends to congratulate and raise their glasses to their colleague. 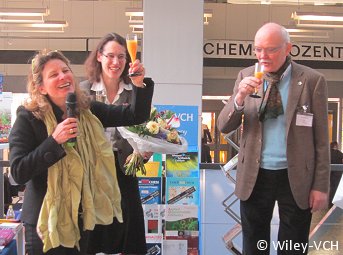 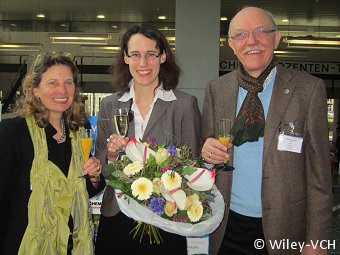 There was even a ChemistryViews-themed cake, which didn’t last long once it was cut …