In December 1962, the first edition of the “Organikum – Organic Chemistry Basic Practical Course” was published. With over 400,000 copies of 23 German- and 19 foreign-language editions sold, the book has strongly affected the basic university education in organic chemistry in Germany and beyond.

The Start
The manuscript of the first Organikum was assembled between 1959 and 1960 at the Institute of Organic Chemistry, Technical University of Dresden, then German Democratic Republic (DDR).

17 scientific assistants aged between 24 and 40 years, with solid experience in student education, developed the book. The leading authors were the senior assistant Heinz G. O. Becker and Klaus Schwetlick. Becker created the concept of the book. The aim was to replace the classical organic chemical education, based on substance classes, with a breakdown by types of reactions. The idea was to present larger areas of organic chemistry compactly and to closely link synthesis and theory, as well as laboratory practice and technical applications.

General Procedures for the preparation of compound types should overcome the image of organic laboratory courses as a cooking course and should strengthen the awareness for the essence of a reaction. These general procedures described the preparation of more than a thousand substances.
All experimental instructions were pre-tested in the organic chemistry lab at the Institute of Organic Chemistry at the Technical University of Dresden.

Most universities and colleges in East- and West-Germany introduced the Organikum as their standard textbook for the basic organic chemistry practical course. Of the first seventeen editions sold from 1962 to 1988, an average of 8,000 copies per year were sold; mostly they went to the Federal Republic of Germany (BRD).

Authors about the Organikum
Some of the Editors involved in the Organikum over the last 50 years told the ChemViews magazine the following about their work with this outstanding book:

A unique experience for me was that while drafting some sections of the chapter “Organic – Preparative Part” in 1960/1961, I had a group of ten test students who I could successfully accompany through their practical course.
The 17 scientific assistants of the Institute of Organic Chemistry developed a very successful approach of training in experimental organic chemistry. This successful outcome is confirmed today in the 50th Year of the Organikum.
Professor Werner Berger, Dresden, Germany
He participated in the development of the Organikum from 1959–1967

How Long Will it Take to Come up With a Manuscript?

Professor Friedrich Asinger was director of the Institute of Organic Chemistry, Technical University Dresden, when the idea arose to develop a new practical approach for the training in organic chemistry. The project was approved at a consultation of assistants in the spring of 1959, at which I participated as the youngest member. To Asinger’s question of how long it might take to develop the text, a young graduate student replied: “If we all make a real effort, then this could be done in about six to eight weeks.” A hearty laugh was the response from the experienced author of scholarly monographs.
It finally took about two years until we could submit a manuscript for review to Professor Asinger, who in late 1959 had moved to the RWTH Aachen.
Professor Egon Fanghänel, Halle, Germany
He has participated in the book since 1959, from 1964–1968 and since 2001 he has been secretary of the authors’ collective.

Father of the Organikum
We are all 50 years older and afflicted with various ailments. This and the changing paths of life have more or less affected our participation in the Organikum. Only our child, the Organikum, has remained youthful. Contributing to this youthfulness is the approved, time outlasting concept, the constant new editions with updates, and, last but not least, the new members of the authors’ collective.

May the Organikum live many more years and fertilize education!

Professor Dr. Dr. h.c. Heinz G. O. Becker, Merseburg, Germany
Initiator of the Organikum as well as active author till the end of the 90s

From Adventurous Early Student’s Experiments to the Organikum

I always like to remember an incident that occurred in the early summer 1968: I was at that time a student in the 10th grade at the high school “Romain Rolland” and, already interested in chemistry, I installed a small laboratory in my parents’ apartment. In order to perform more sophisticated experiments, appropriate equipment, which was difficult to find, was required. For this reason I cycled to the TU Dresden. In the courtyard of the Chemical Institute valuable treasures in the form of glassware were dozing in the rubbish bin.

Soon I found myself with the upper part of my body in the trash can and did not notice the tall man in a white lab coat that was standing behind me. As I reappeared with an intact three-necked flask, he asked me friendly, what I wanted to do with this. I responded that it was to extend my “private lab”.

He began to smile and said that I should take care not to be caught, because chemistry is dangerous. He knew this because he had supervised practical lab courses and in addition had himself suffered a severe accident in the lab. To my surprise, I was allowed to leave with my “haul”. That year I found an Organikum among my Christmas presents. With its help I was able to prepare organic compounds.

Much later as an undergraduate student I became aware of which personality I met that day. Then I had the great fortune to be supervised in the practical course and during my thesis by Professor G. Domschke, one of the founding authors of the Organikum.

Thanks to him I have been an author of this book since the 21st/22nd edition. And I am still doing this with joy and commitment.
Professor Rainer Beckert, Jena, Germany
He has participated in the development of the Organikum since 2000

During my studies at the University of Hannover (1978–1983), I “scientifically grew up” with the Organikum as the practical course book in organic chemistry. On my first appointment to full professor at the University of Karlsruhe (1991–2001), I also used the Organikum for teaching the undergraduate practical course in organic chemistry. After my move to the chair of Organic Chemistry at the Technical University of Dresden in 2001, I felt honored when I was asked in 2007 to join the team of experienced Organikum authors – the latest installment of working with the Organikum from different perspectives at different stages throughout my scientific career.
Professor Hans-Joachim Knölker, Dresden, Germany
He has participated in the development of the Organikum since 2007 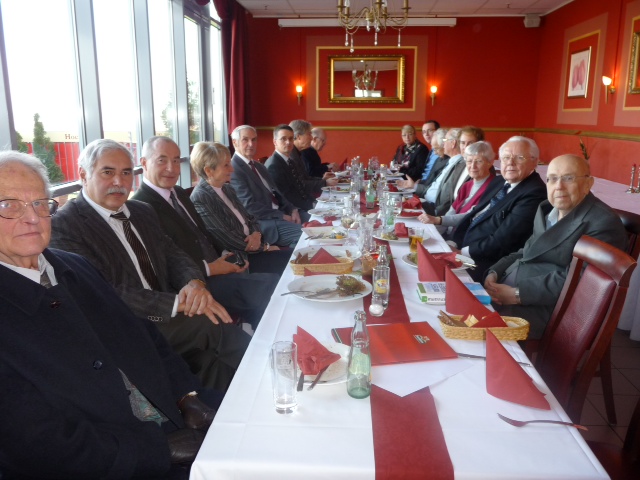 The Editor of the Organikum together with most of the authors, Dr. G. Walter, Wiley-VCH, and some guests meet to celebrate the 50th anniversary of this outstanding book.