In order to be able to characterize biomolecular processes, new analytical methods need to be developed. In the Micro- and Nanosenors research department at the Frauenhofer Institute of Applied Solid-Sate Physics in Freiburg, Germany, Jakob Hees, Nianjun Yang, and co-workers are particularly interested in the use of diamond in the preparation of electro- and biochemical sensors. They have prepared ultramicroelectrode arrays (UMEAs) and nanoelectrode arrays (NEAs) that contain boron-doped nanocrystalline diamond. The team have demonstrated the potential of NEAs to discriminate diffusion-controlled from adsorption-controlled processes.

Using neutral methyl viologen (MV0) as a model system, they investigated its absorption on hydrogen- and oxygen-terminated diamond surfaces. They found that MV0 absorbs preferentially on a hydrogen-terminated surface, resulting in a sharp anodic peak stripping peak in the voltammogram (pictured, below), and depends very much on the type and the concentration of the electrolyte. In contrast, a sigmoidal voltammogram was recorded with an oxygenated electrode surface, indicating there was no MV0 adsorption (pictured, above). 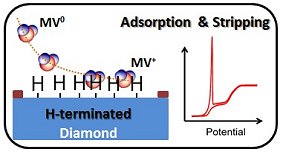 The differences in the shapes of these voltammograms are attributed to differences in the diffusion profiles of the two systems, which changes from hemispherical diffusion on oxygen-terminated surfaces to thin-layer electrochemistry upon adsorption on hydrogen-terminated surfaces. Hence, diamond NEAs are ideal for the study of adsorption phenomena at the liquid–solid interfaces with voltammetry that would not necessarily be accessible using conventional macroscopic electrodes.