At the Lindau Nobel Laureate Meeting in July 2013, Professor Dan Shechtman spoke to Dr. Christian Remenyi and Dr. Vera Köster for ChemViews magazine about the reason why quasicrystals weren’t discovered earlier and his unerring belief in his experiments, despite the controversy that his discovery of quasicrystals caused.

In the mid-1980s, there were three ground-breaking discoveries in the chemistry of materials: fullerenes, high temperature super-conductors and your quasicrystals. The researchers of the first two received their Nobel Prize very quickly. But you had to wait 30 years. Did you think you might never get it?

I really do believe that anyone who gets the Nobel Prize deserves it. But that doesn’t mean that whoever deserves a Nobel gets one. It never bothered me, personally. I always said: They have better candidates than me. I just put it out of my mind. So when it finally came, it was a total surprise.

I was working on my computer, 11:15 in the morning. The phone rings: “Danny speaking,” I said. “Hello, this is the Royal Swedish Academy of Sciences. Please hold the line for a very important message.” I said to myself, “Oh oh”. After the announcement they told me not to tell anyone else for half an hour, because at 11:45 they were going to announce it to the world. So I put down my work, left the computer, and just sat there at my desk staring at the floor in front of me, just staring, and thinking, what’s going to happen now? I couldn’t even imagine what actually happened next. I thought: OK, now there will be three or four invitations from here and there in the world, I will speak here and there; I totally underestimated the reality.

So it completely changed your life?

Yes. I travel all over the world. I have endless invitations to many different places. I only accept a few, simply because – unlike an electron – I cannot be in two places at one time. And so … but I really try … Let’s put it this way: I’m inspired to try to inspire young people.

I had the good fortune to attend your Master’s class yesterday at the Lindau Nobel Laureate Meeting. It seemed to me that you enjoyed passing on your experience to the young people there.

Lindau is very special. There is no meeting like it anywhere in the world, where so many Nobel Laureates meet so many students over a longer period – a whole week. There is always lots of interaction. This is really unique.

Yes, I enjoy it. I am a teacher. I like people to understand what I am talking about. This is why I always start with very simple questions like: What is order? What is rotation symmetry? I want people to understand what I’m talking about. I feel like I’m on a mission to advance the education of the younger generation, and by doing this to promote peace in the world. We live in a world full of serious – even dire – problems. We have to work hard to calm this world down and start working on doing good things.

You have always been a dedicated teacher: You even invented a course at the Technion about entrepreneurship – I believe it’s called “technological education”?

Yes. I will have been teaching it for 27 years now. Year after year after year. By now I have about 10,000 graduates who are well-known engineers or scientists in Israel. So over the past 25 years Israel has become a start-up nation, and I’m proud to have contributed to this.

How did you happen to make your way into science?

Purely accidentally. When I was young, I wanted to become an engineer, because I loved the book, The Mystery Island, by Jules Verne.

I’ll let you in on a secret: I have this book with me right now. I’m reading it again, after 50 years without touching it. I brought it here with me, to recall it to my mind.

In this book, the five characters are stranded on an island together and have to make everything themselves that they need to survive. The leader is an engineer. They all obey him and admire him because he can do anything. So I wanted to be like him. And indeed, after my military service, I went to the Technion and studied mechanical engineering. But then, in 1966, there was a big recession in Israel and I couldn’t find a job. So I said to myself, I will do my Master’s degree and in two years I will find a job. But during those two years I fell in love with science and decided to go for a Ph.D. And this is why I am here today.

In the beginning it was very hard for you to convince other people of your ideas about quasicrystals. Was there ever a moment, when you wanted to go to your lab boss and say: Yeah, you’re right, the crystals are twins. There are no quasicrystals.

Never. You don’t know me. I am almost never affected by what other people think. I repeated my experiments. I was an expert in electron microscopy, and I knew that my experiments were correct. I said to the others: If you want to prove me wrong, repeat my experiments. Show me what is wrong in my experiments. Don’t tell me it can’t be true just because of what you read in your books.

And everybody who repeated my experiments said: “Danny, fantastic”. And all these people who were lined up against me – Linus Pauling as the spearhead – were simply wrong. It’s a pity: Pauling was really, in fact, the greatest chemist of the 20th century, definitely the greatest in the United States. He was a great scientist. He fought me for ten years, from 1984 to 1994 – until he died. And he made himself a laughing stock, because after a few years everyone knew he was wrong. The journals finally started rejecting his papers and sending them back to him. He disgraced himself. A sad story.

Why weren’t quasicrystals discovered before 1982?

So what was the reason?

But the initial discovery was only possible with electron microscopy?

Yes. And just being an electron microscopist was not enough: you had to be an expert in electron microscopy. And this is what I’m asking students now: Do you want to succeed in science or just be up on it? If you want to succeed in science, you have to have broad knowledge, true, but you also have to develop a very high peak of expertise. Find something interesting. Bite it. Bite into it like a Rottweiler dog. Don’t let go. Don’t let go until you know what it is. Listen to other people, but if they talk nonsense, shut your ears. You have to be stubborn, not in a negative but in a positive sense. Persistent. That’s it.

I see you are wearing a tie with a quasi-periodic array?

My University, the Technion, had this tie made for me for my birthday, before I got my Nobel Prize. After the Nobel Prize, the demand for them got so intense that the Technion had to make 5,000 more. Now they will probably have to come out with a third edition because they are running out of them again.

A very nice idea. Thank you very much for the interview. 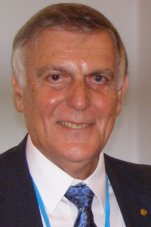 Dan Shechtman, born 1941 in Tel Aviv, Israel, studied mechanical engineering at Technion – Israel Institute of Technology, Haifa, Israel, and gained his B.Sc. in 1966. He obtained his M.Sc. in 1968 and his Ph.D. in 1972 there, both in materials engineering. After receiving his doctorate, Shechtman was an National Research Council (NRC) fellow at the Aerospace Research Laboratories, Wright Patterson Air Force Base, OH, USA, where he studied for three years the microstructure and physical metallurgy of titanium aluminides. In 1975, he returned to the Technion, joining the Department of Materials Science and Engineering. He took a sabbatical at the Johns Hopkins University, Baltimore, MD, USA, from 1981 until 1983, and at National Institute of Standards and Technology (NIST), Gaithersburg, MD, USA, from 1992 until 1994.

Shechtman’s Technion research is performed in the Louis Edelstein Center, and in the Wolfson Center, which is headed by him. He is currently Philip Tobias Professor of Materials Science at the Technion.

The focus of the research in his group are theoretical aspects of the quasi-periodic structure, which he discovered in 1982, and its implications and experimental evidence for the understanding of the structure and its properties, and also structural defects in CVD diamond wafers and their effect on the wafer’s growth and properties.

For a slightly longer version of the interview see: