A Copy in (Almost) Every Lab

Its pages adorn the walls of organic chemistry and NMR labs across the world. At the time of checking*, a full 16 years after its publication, it is still ranked number one most read article over the past twelve months in the Journal of Organic Chemistry, but most people have only ever read two of its four pages. According to ThomsonReuters Web of Knowledge it has been cited a whopping 1118 times*, and this doesn’t include the enormous number of photocopies taken by new students to stick on their walls at their new desks. Yet this paper reports no new reactions, no new materials, and no new computational techniques. There are no groundbreaking techniques to be found within its paragraphs, and what is contained in this manuscript had been public knowledge for many years at the time it was published. So how did this paper become such a classic?

I am referring to “NMR Chemical Shifts of Common Laboratory Solvents as Trace Impurities”, which was published by Hugo E. Gottlieb, Vadim Kotlyar, and Abraham Nudelman from the Department of Chemistry, Bar-Ilan University, Israel, in 1997. At its heart, it is just two simple lists. The paper contains two tables of 1H and 13C NMR chemical shifts for 35 of the most common solvents and other impurities that are found in NMR spectra. The spectra were recorded in seven of the most common deuterated NMR solvents, and the analytes are mostly solvents that you might expect to find, for example, left over from column chromatography or a recrystallization. 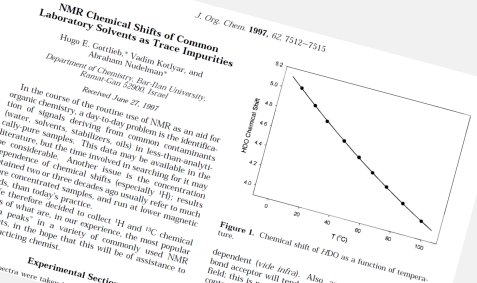 The one or two real “impurities” included in the list, such as “grease” and “silicone grease” show that the authors really thought about how organic chemists work, and also make the valuable point that unexpected analytical signals can come from sources you least suspect.

The authors were also clearly all about saving themselves and others unnecessary work. Not only did they realize how much energy someone might have to expend to identify odd resonances in an NMR spectrum, when a simple list would save so much effort in finding all the relevant data, but they also saved themselves a whole heap of data recording and processing time in the way they recorded the spectra. The group made carefully thought out stock mixtures of their analytes, such as acetone, tert-butyl methyl ether, N,N-dimethylformamide, ethanol, and toluene, such that the signals from each compound didn’t overlap and they could record several spectra in the same deuterated solvent in one go. It was a simple technique, but an effective way to collect all those data efficiently.

And what useful and sometimes irritating data they can be. I myself have felt the same despair as so many others, as running your finger up the ppm scale of what should be a beautifully clean spectrum of your sparkling white compound in CDCl3, that cursed signal belonging to ethyl acetate rears its ugly triplet at δ = 1.25-ish. Oh no. More time on the rotavap. More co-evaporations. More nights on that pathetic contraption you call a vacuum pump, which would probably be more effective if it was replaced by the latest Dyson vacuum cleaner. More time in the NMR queue. And all that for a lower yield than you thought you had. But the data are, of course, just the messenger. They just tell you to do a better job drying your stuff.

Next time you look at this paper on your lab wall or find a copy of it under a pile of old spectra, slightly dog-eared and with a couple of ancient coffee stains on it, spare a thought for the considerate folks who measured and collated all of these data. I applaud the foresight of the editor who accepted it and the authors who wrote it to see that these two simple lists could make the lives of so many chemists just that little bit easier.