The 94th Annual Meeting of the Chemical Society of Japan (CSJ) took place in Nagoya at the Higashiyama Campus, Nagoya University, from March 27 to 30. Ca. 8000 chemists, predominantly from Japan, met to attend ca. 600 presentations, an international vendor exhibition, as well as additional satellite meetings.

Although most of the events and presentations were in Japanese, there was an international program included in the symposium, and – for the first time – a 36 page guide for all presentations was provided in English. The CSJ discussed if the official language should be changed to English from 2015.

International Program
The international program included an Asian International Symposium with 80 lectures in eight categories, the Nakanishi Symposium 2014 (CSJ-ACS), the Editor-in-Chief & Researchers` Forum, The Chemical Record Lecture 2014, a Japan-US joint Symposium on Advanced Organo-Main Group Chemistry (CSJ-ACS), the CSJ Gender Symposium For Future Leaders in Chemistry for Science, for Society and in the World, a Frontiers of Artificial Photosynthesis Symposium, and the President Lecture and Award Ceremony (in Japanese). 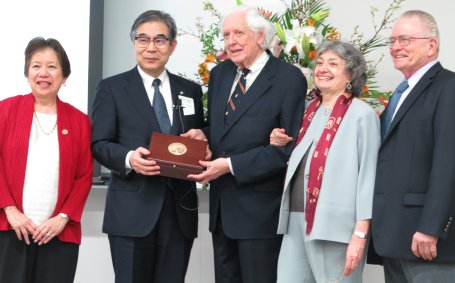 Jerry Meinwald`s research has been devoted to chemical ecology in a three decades lasting close relationship with the late Tom Eisner, Professor at Cornell and known as the “father of chemical ecology”. Both groups isolated and identified biologically active compounds from insects and other arthropod sources. They were also involved in the identification of the messenger molecules involved and the understanding of the underlying signal transduction pathways.

During the Symposium Professor Minoru Ueda, Tohoku University, Sendai, spoke about the chemistry and biology of the plant leaf-movement. He and his group identified 12-o–β-D-glucopyranosyljasmonic acid (JAG) and its unique function as an endogenous mediator of plant movements. Next, Professor Junichiro Yamaguchi, Nagoya University, presented his findings towards an ideal synthesis of bioactive molecules through direct arene assembling. This is important as biaryls and heterobiaryls are ubiquitous motives in pharmaceuticals, natural products, and organic materials. Professor Tetsuro Shinada, Osaka City University, showed how his group solved the structure of a new Juvenile Hormone, JHSB, in a stink bug by a new chemical library approach. Professor Ritsuo Nishida, Koyto University, presented findings about the chemical ecology of insect-plant interactions and the ecological roles of phytochemicals. Plants produce secondary metabolites as chemical barriers against herbivores; and phytophagous insects may use these unique substances as specific hints to find hosts, defensive substances of their own or even as sex pheromones.
Finally, Jerry Meinwald gave a wonderful talk about the significance of natural products from the viewpoint of the producing organisms, such as the relationship between plant defensive and insect signaling chemistry. He believes that the study of chemical ecology will be very important to preserve the earth`s biodiversity.


The Chemical Record Lecture
The next afternoon, this topic was also touched by the TCR Lecture (The Chemical Record, the Editor-in-Chief, Hisashi Yamamoto, Nagoya, was in attendance) which has been awarded in 2014 to Professor Scott A. Snyder, The Scripps Research Institute, Jupiter, FL, USA. He was introduced by Professor Masayuki Inoue, University of Tokyo, and the mostly young audience applauded his brilliantly structured and delivered lecture on “Exploring Chemoselectivity through Natural Product Synthesis”. (more on the TCR Lecture) 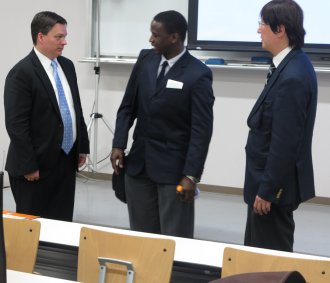 Scott Snyder after his lecture in discussion. © Wiley-VCH

Editor’s Forum
The Editor`s Forum was a first at this meeting. The editors Dr. Peter Goelitz, Angewandte Chemie, Professor Norihiro Tokitoh, Bulletin of the CSJ, Professor Mitsuhiko Shionoya, Chemistry Letters CSJ, Professor Kazuyuki Kuroda, Waseda University, Tokyo, Professor Takashi Kato, University of Tokyo, Kaoru Hatano, Thomson Reuters, and Professor Katsuhiro Ariga, National Institute Materials Science, Ibaraki, presented their experience and views. During the following panel discussion they debated about the relevance of constant innovation, the quality, and the critical issues around the Impact Factor. It was shown that only one highly cited paper can lift the Impact Factor of a journal for a short time by 0.8 and in some cases even far beyond.

CSJ Gender Equality Symposium
Another first at this CSJ Annual Meeting was the CSJ Gender Equality Symposium on Saturday afternoon. Dr. Marinda Li Wu, ACS Past President, presented her “Personal and Professional Journey”. She stressed how much is influenced by one’s destiny and that it is most important to simply raise the awareness regarding gender equality again and again.
Professor Sayaka Uchida, Tokyo University, winner of the 2014 Award for Outstanding Young Women Chemists, presented her research under the headline “Rational Design and Synthesis of Functional Porous Ionic Crystals”, as did Professor Rie Makiura, Osaka Prefecture University, who spoke about “The Creation of Functional Organic-Inorganic Hybrid Nanostructures”. Professor Kazue Kurihara from Tohoku University described the activities of the IUPAC to have women chemists better recognized and presented a lot of information about the situation in Japan as well as around the world.

The only man speaking in this session, Professor Hiroshi Ogino, Tohoku University, reported about the times when Tohoku University had opened for (three) female students in 1913. Among them was the first female chemistry student Kuroda Chika who was supported during her career by the eminent Japanese chemist Majima. Today there exists “The Kuroda Chika Award” to encourage female students to do a PhD.
The symposium closed with two talks from industry about “Continue Working throughout Life” by Dr. Chizu Sekine, Sumitomo Chemical Co., Tokyo, and “Efforts of Active Promotion of Diverse Human Resources” by Dr. Mihoko Inaba, Lion Corporation, Tokyo. 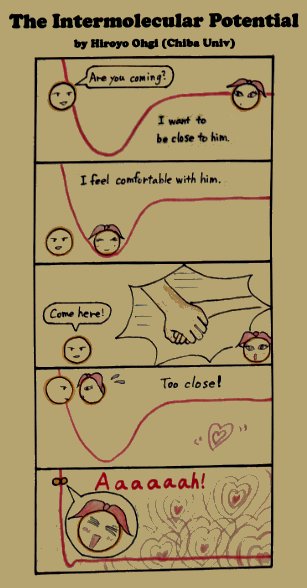 At the International Chemists` Evening reception, several awards were presented to young chemists after greeting addresses from the CSJ President, Professor Kohei Toamo, RIKEN, and Dr. Eva E. Wille, for the GDCh. One of the awards was the IUPAC Student Physical Chemistry Cartoon Competition 2013, which was won among others by Hiroyo Ohgi (picture below). Professor Kazuyuki Tatsumi, IUPAC`s Past President, Nagoya, was proud to present the award to her. 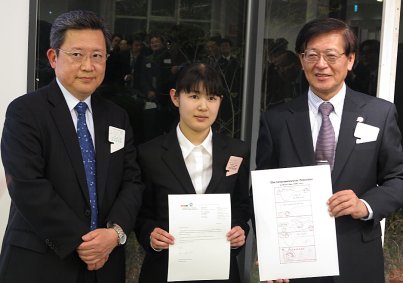 For all of the international guests it was a truly unique experience to attend this huge Japanese meeting and enjoy together with the Japanese not only very good chemistry but also the blossoming cherry trees on the campus and all over Nagoya.