Pluraflavins (A, B, and E), named after the structurally similar pluramycins, were isolated from cultures of Saccharothrix sp. DSM 12931 in 2001. Key structural components consist of an anthrapyran core with appendages at the C2, C5, and C10-positions and α(1–4) oliose and αC-linked rhodosamine residues. However, their absolute structures have yet to be fully elucidated. Pluraflavin A is of particular interest as, in addition to antibiotic activity against gram-positive bacteria, the epoxide-bearing isolate demonstrates potent cytostatic activity against a number of human cancer cell lines.

In line with their longstanding interest in the application of total synthesis to cancer chemotherapy, S. J. Danishefsky and co-workers, Columbia University and Memorial Sloan-Kettering Cancer Center, USA, have embarked on the synthesis of pluraflavin A with the aim of overcoming its formidable structural challenges. These include its highly functionalized aromatic core, epoxide side chain, and position and orientation of the C-glycosidic bond. Thus far, the group has developed a route to a late-stage intermediate en route to pluraflavin A that overcomes these challenges, firstly, by the construction of an aglycone that subsequently serves as a platform for the installation of the glycosidic appendages by Stille coupling followed by hydrogenation of the cross-coupling product. Total synthesis will require the installation of the dimethylamino group of the rhodosamine residue and global deprotection of the resulting product. 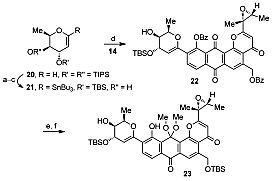