What could be more common than the rock salt used in every kitchen? Composed of Na cations and Cl anions, it was until recently considered the only possible compound formed by these elements.

The chemical properties of NaCl are well known. Due to the high electronegativity difference between Na and Cl atoms, rock salt salt is remarkably stable with highly ionic bonding. The 1:1 stoichiometry is determined by charge balance. However, major changes of chemical bonding are possible in any material under high pressure, when the pressure • volume (pV) term in the free energy becomes greater than the energy of chemical bonds [1, 2]. This results in unusual stoichiometries of compounds involving only sodium and chlorine atoms.

The nature of chemical bonds at extreme conditions is still not well understood even for simple binary systems like that involving the sodium and chlorine. Both experimental [3–6] and ab initio [7–9] studies of NaCl behavior under high pressure yielded a phase transformation from the rock salt structure into the CsCl one (of B2-type) at 30 GPa [7, 8]. At much higher pressures metallization of NaCl is expected both from the DFT calculations [9] and on the basis of the Herzfeld criterion [10], which explains metallization in terms of a “dielectric catastrophe” freeing the bound valence electrons at the critical metallization density.

Here, NanClm compounds (n ≠ m) that are stable under nonambient conditions will be discussed.

An international team of researchers led by Artem R. Oganov, Weiwei Zhang and colleagues reported that they predicted and obtained stable cubic and orthorhombic NaCl3 as well as two-dimensional metallic tetragonal Na3Cl [11]. The study started with molecular modeling of the systems under investigation followed by experimental confirmation of some of the theoretical predictions. The new species are calculated to be stable at high pressures above 20 and 77 GPa, respectively [11]. The same calculations allowed them to predict the stability of Na2Cl, Na3Cl2, and NaCl7 at even higher pressures of 100, 120, and 142 GPa. The authors call all these compounds counterintuitive; they certainly do not conform to the standard chemical curriculum.


Looking for Compositions that are Stable at Nonambient Conditions by Modeling

Modelling compounds involving sodium and chlorine was carried out with the ab initio evolutionary algorithm USPEX [12–15] for any combination of numbers of atoms up to 16 in the unit cell. The algorithm can simultaneously find stable stoichiometries and the corresponding structures in multicomponent systems [11]. Detailed calculations of enthalpy and P-x phase diagrams performed at various pressures yielded the stability of not only NaCl (which was found to be stable at all conditions) but also of Na3Cl, Na2Cl, Na3Cl2, NaCl3, and NaCl7 at elevated pressures. The dependence of the calculated enthalpy and stoichiometry for several pressures is presented in Figure 1. 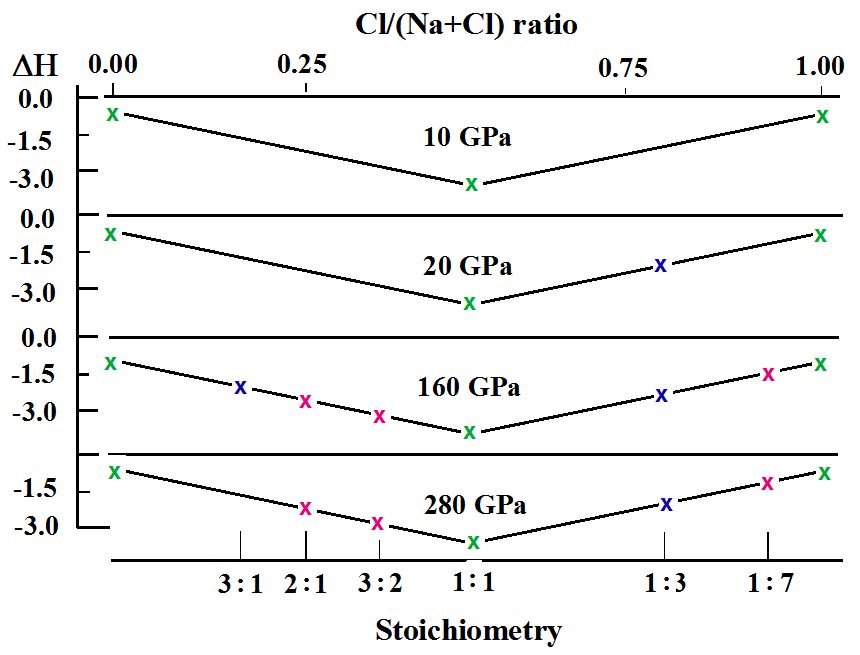 Figure 1. Convex hull diagram for the Na–Cl system (ΔH in eV/atom) at the selected pressures [11]. Stable sodium, NaCl and chlorine are given in green, Na3Cl and NaCl3 synthesized by Zhang, Oganov et al. are denoted in blue while Na2Cl, Na3Cl2, and NaCl7 (stable according to calculations but still hypothetical) are marked in red. Several metastable structures obtained in the calculations have been omitted.

To verify the results of the calculations, high pressure experiments were carried out in a laser-heated diamond anvil cell in the region between 10 and 80 GPa on the Na–Cl system in the presence of excess chlorine or sodium [11]. Na3Cl and NaCl3, expected to be most stable on the basis of the calculations, were specifically targeted. Since NaCl is a stable compound at all explored conditions, the sample was heated by laser radiation to overcome kinetic barriers. The reaction products have been examined by visual inspection, absorption spectroscopy, confocal Raman spectroscopy, and synchrotron X-ray diffraction [11].

In agreement with the calculations, NaCl3 is stable at 20 to 48 GPa and has a Pnma structure; at 48 GPa it undergoes a phase transformation into a metallic A15 (Cr3Si type) structure with the space group Pm3n. Pnma-NaCl3 decomposes to NaCl and Cl2 below 18 GPa and is metastable between 18 and 20 GPa.

The structure below 48 GPa is remarkable: it contains an almost linear asymmetric Cl3 group for which the Bader analysis [16] gives a charge on the central atom close to zero and a negative charge on the ends with the resulting charge of the whole anionic group equal to around –0.8. Thus, there is ionic bonding between Na+ and [Cl3]– and a rather ionic covalent bonding within the anion groups. The structure of the trichloride anion is similar to those of the well-known trihalide anions I3–, Br3–, ClICl–. Interestingly, the bonding of the central chlorine atom of the Cl3– group violates the octet rule [17], since the atom adopts dsp3 hybridization and has five electron pairs.

For the sodium-rich Na3Cl, the tetragonal space group P4/mmm with a [NaCl][Na2][NaCl][Na2]… sequence of layers was predicted, and the c parameter of the unit cell is doubled relative to that of B2-NaCl. XRD of the samples laser-heated above 60 GPa showed new Bragg peaks that could be interpreted in terms of a tetragonal P4/mmm unit cell. The synthesized tetragonal metallic phase of Na3Cl and the Raman results were consistent with the model calculations.

Another possibly stable compound, NaCl7, was calculated to be stable above 142 GPa in a cubic Pm3 structure. Unexpectedly, the sizes of the chlorine anion and sodium cation in NaCl3 and NaCl7 were found to be very close at 200 GPa. This finding contradicts the fact that at ambient conditions, the chlorine anion (1.81 Å) is much larger than the sodium cation (1.02 Å). As a result, NaCl3 and NaCl7 have very similar values for lattice parameters and bond lengths at these extreme conditions.

Yet More to Find

Although several compounds with unusual stoichiometries such as lithium hydrides with 1:2, 1:6, and 1:8 ratios were predicted to be stable under elevated pressures [18], they could not be found experimentally yet [19]. Other findings by the Oganov group [20, 21] allow us to expect that more exciting structures and compounds with untypical bonding, for example in the K–Cl and Mg–O systems, could be stable at extreme conditions, and there is growing experimental support for these predictions. Strongly compressed matter may thus need a new approach to chemical dogma.